Sacha Baron Cohen’s Borat returns to the big screen after 14 years to wreak havoc again, this time with his eyes squarely set on the world of American politics 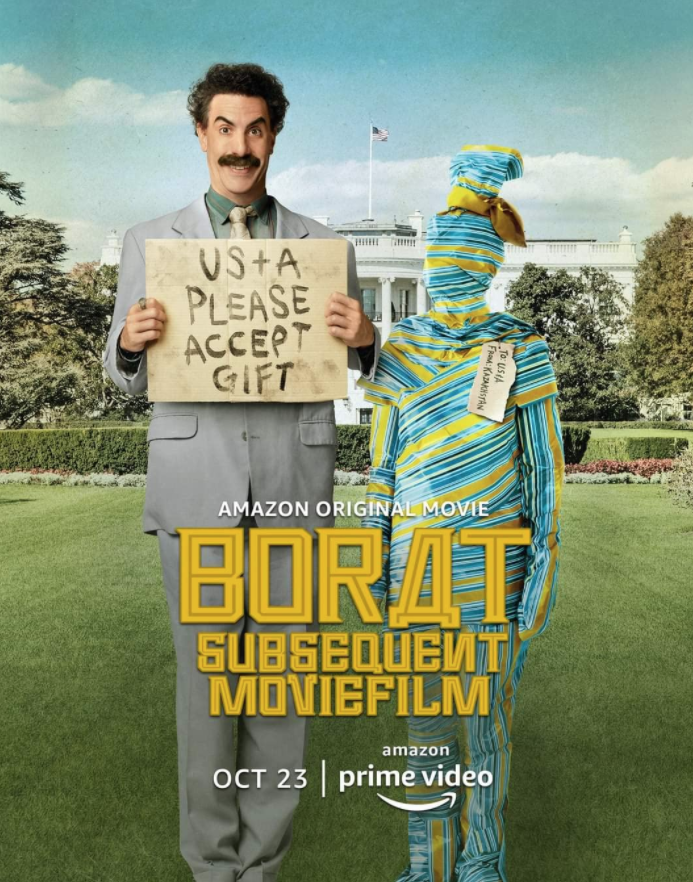 An unexpected sequel to the 2006 film Borat, Borat Subsequent Moviefilm arrived on Prime Video this past week with a clear agenda: to poke fun at the current political regime. The first Borat was lightning in a bottle as Sacha Baron Cohen was able to go into character and expose churchgoers, frat bros and even a political figure or two. However, Borat Subsequent Moviefilm is dead set on America’s current political situation. Baron Cohen, like many of the American people, is clearly frustrated about the people who have been in power in this country for the last four years. Borat himself loves the new right-wing regime, but that shouldn’t be an encouraging endorsement, seeing as Borat and the fictionalized Kazakhstan are pro-caging women to start the film. Cohen again turns in a solid performance as Borat and Maria Bakalova is able to match Cohen on-screen as Borat’s daughter, Tutar. These characters are able to point out that stupidity has run amok within our country, and they understand that the best satire is real life itself.

A major hurdle in making the film was that Borat has become too recognizable of a character to work on the same scale as the first film. Cohen addresses this in the film by dressing up in costumes while still in character as Borat. It never feels as though Borat is absent for too long in the film, and Cohen is successfully able to pull off his greatest feats in the film by pretending to be different characters. Cohen effectively explores the power of anonymity and seeing just how far people will go under the guise of politeness. This was something he hit on in the first Borat, but Borat Subsequent Moviefilm actually looks more like Cohen’s recent Showtime series, Who is America?  In this series, while disguised as four different characters, he was able to coerce politicians into doing some pretty crazy stuff. The most notable of which was when he convinced former Georgia State Representative Jason Spencer to drop his pants and repeatedly yell the n-word. Borat Subsequent Moviefilm definitely aims and shoots high with the politicians it seeks to take down and is even successful in his task.

Prior to its release, this movie was already making headlines for its Rudy Giuliani scene, but this one moment shouldn’t overpower the rest of the movie.  This film is so much more than just one scene of a famous ex-mayor getting caught touching himself, but it seems like that’s what fills all of the headlines and sells all of the papers. It’s also disturbing seeing Borat live with QAnon conspiracy theorists who believe that Hillary Clinton drinks the blood of children. Borat runs through a convention dressed in KKK robes and gets away with it. Cohen even gets a whole crowd to sing about injecting Barack Obama and Dr. Anthony Fauci with the “Wuhan flu.”  It shows how little we’ve come from the early 2000s, where Borat, on Da Ali G Show, got an American crowd to sing “Throw the Jew Down the Well.” The movie shouldn’t be boiled down to an “October surprise” in this election year, rather it should be regarded as a harrowing picture of our country should nothing change.  Most people know that Rudy Giuliani is a shady guy, shoot, he married his second cousin. Advertising Giuliani’s scandal is going to be the easiest way to get more views but leaning too heavily into making the movie into a two minute viral clip jeopardizes the point that the movie is trying to make.

Aside from all of the moments that we saw from the American people, there were genuine moments that inspire hope going forward. When confronted with the absurdity of Borat and his daughter, the babysitter Jeanise Jones actually took the time to sit down and educate Tutar about the world and women’s rights. This same patience and grace are exemplified by Judith Dim Evans, an elderly synagogue goer.  Borat charges into a synagogue disguised as his idea of a Jew and is distraught because online conspiracies have convinced him the Holocaust never happened.  Mind you, Borat considers the Holocaust to be his nation’s crowning achievement, a joke that I feel goes over a line even coming from Cohen, a believer in Judaism. However, his joke about Jewish stereotypes is met with kindness from Evans who seeks to teach him that Jewish people are just like everyone else.  It’s so encouraging to see both Jones and Evans try to teach these “foreigners” and get them to realize that their way of thinking is completely backward. It’s encouraging to me that these people on a hidden camera film were able to be good and kind, without knowing that someone else was watching. Most of the other people recorded in the movie use the assumed anonymity they have to say some really terrible stuff that they only have to come to terms with once caught on tape, so seeing Evans and Jones act with compassion was all the more inspiring.

Borat Subsequent Moviefilm is a movie that doesn’t necessarily live up to its predecessor, but I don’t believe that was ever the aim of the film. Borat 2 is a more than serviceable sequel, a far cry from the stereotypical bad comedy sequel. Its primary focus is not on the plot, but rather on the political satire found in the characters’ interactions with real people.  Even the movie’s final message to the audience is “Vote Now.” The film often feels like “Borat’s Election Year Special” than its own unique story, but it’s still a movie I’d recommend and had a good time watching.