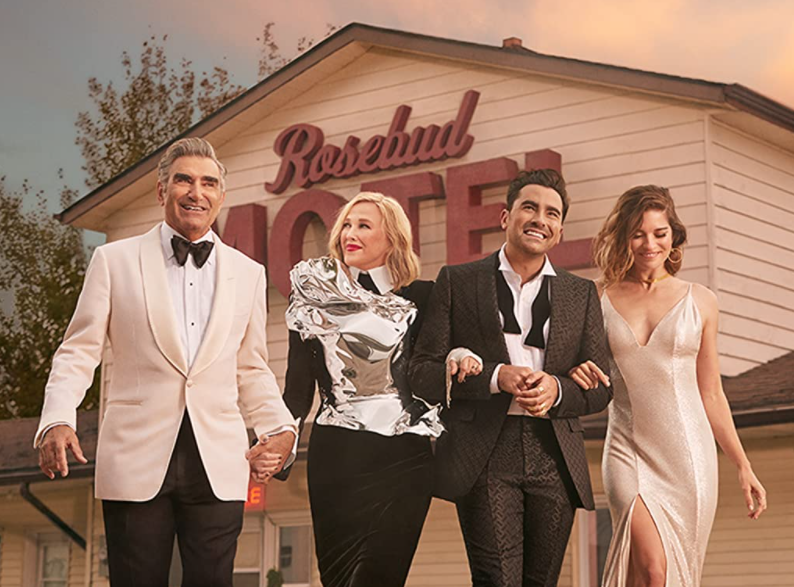 Season six marks the last of the beloved Canadian comedy series, Schitt’s Creek. At the 2020 Emmy Awards, the show received nine recognitions including Outstanding Comedy Series and Outstanding Lead as well as Supporting Actor roles for the show’s four main characters. In previous years, the show has not won a single award, but by its sixth season, the characters are nearly impossible not to love and the comedic elements almost always spark a laugh. In an interview after the Emmy’s, Dan Levy, the show’s writer and lead actor, said that he believed the season was so successful because of its timing. Not only was it the series’ final season, but it also aired during such a difficult economic and social time in America. Since the beginning of 2020, American media and culture has been littered with political ads, social strife and pandemic anxieties. When people turn on the TV, they want to relax, they want to mentally escape and they want to laugh. Schitt’s Creek enables its audience to do just that — to forget about their problems for a little bit and have a laugh.

Season six of Schitt’s Creek launched the series to the top of my “favorite shows” list. Truly, the only negative part about the season was that it was the series’ last. It made me feel all kinds of emotions from Alexis’ breakup with Ted to David’s marriage to Patrick and the successes each character achieves in between. My favorite part of the season was seeing how far each character has come since the beginning. When the Rose family arrived in Schitt’s Creek, all four of them had the mentality to get out as soon as possible. By the end of the show, each member of the family is given at least one opportunity to leave, and they all choose to stay for a variety of reasons, whether it be a job, friends or pure enjoyment of the town keeping them grounded. By season six, Johnny, Stevie and Roland build and run a successful motel franchise, Moira attains her last bit of movie fame, Alexis crafts a passion for PR and sharpens her professional skills and David opens and runs his own store. The season covers a lot of ground in terms of character development, comedy, unexpected twists and emotional moments.

I watched the entire Schitt’s Creek series in quarantine over the span of April to June. Not only did it provide me entertainment, but it reminded me to appreciate the important parts of life — my family, friends and passions. The entire country’s morale was hurting during the stay-at-home orders with many out of jobs, fearful for their health or struggling to find happiness in each day.

This series really shows its audience that good things can come out of unwanted situations. It reshaped my mentality to look on the brighter side of quarantine, making me cling to hope that something positive would result from this pandemic. Whether you’re looking for a pick-me-up, a laugh or to cry tears of happiness, season six of Schitt’s Creek will make you feel it all.