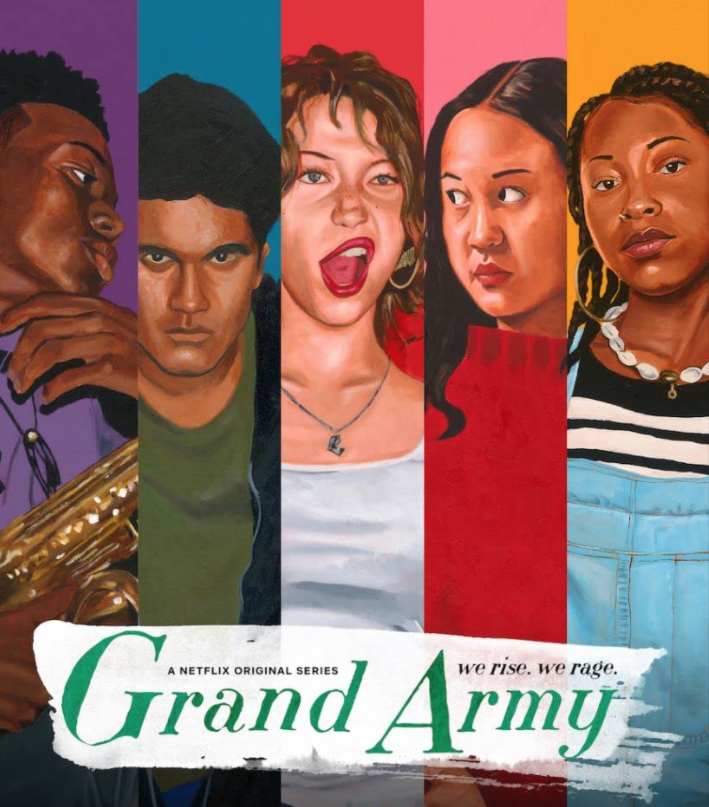 Grand Army was released to stream by Netflix on Oct. 16 2020 (Photo courtesy of imdb.com)

The new Netflix original, Grand Army, which aired on Oct. 16, has been hailed as Netflix’s “knock-off Euphoria.” As someone who very recently watched and cherished HBO’s Euphoria, I was eager to view Grand Army and see if it could match the masterpiece that HBO put together.

I’ll begin by saying that Grand Army was not up to par. It seemed to draw quite a bit from Euphoria, specifically avoiding the issues which crop up in HBO’s series, while using the same multi-character format to convey its ideas. Still, I tried to view the show as its own work, fully separate from Euphoria or any other show.

I was admittedly disappointed by the Grand Army, but I stuck with it to the end, unable to fully pry myself from the stories of each character. Grand Army features the individual paths of multiple teens whose stories get tangled after a terrorist attack near their high school, Grand Army High. Oddly enough, after the bombing in the first episode, the ideas surrounding a terrorist attack seem to linger only slightly, coming and going depending on the character. This is the first of many events in which the viewer becomes confused about whether or not the show’s actions and effects are intentional or accidental.

To explore the characters, whose actors carry the show with their well-done emotion and vulnerability, Joey Del Marco, one of the show’s main characters (and, truly, the one the show revolves around the most), is a take-no-bull kind of girl, a white-feminism-touting tomboy that proudly wears ‘free the nipple’ tank tops, but also seems rather apolitical on other social justice issues. Joey later undergoes a tragedy, which transforms her character from a slightly obnoxious one to one of resilience and perseverance. Joey’s story, out of all the characters,’ was easily the most compelling, and drew me in the most due to her story’s pathos.

Balancing Joey’s overwhelming lack of intersectionality out is Dominique “Dom” Pierre, another main character who plays a rival-turned-friend to Joey, and who is a first-generation Haitian-American that must make major life decisions at a young age due to her financial struggles. These struggles prevent Dom from being a normal teenager, which gets her wound up in a struggle with Jayson and Owen, two characters whose race affects them in ways that the show details.

There are several other main characters, including Sid, a closeted Indian-American swimmer whose worries about his own sexuality land him in difficult situations, as well as Leila, a confused, naive and annoying freshman whose status is her greatest concern. Leila is one of the most disastrous characters on the show — her character confuses viewers, in that they’re not sure whether to dislike her or just hate her. Leila ends her story by not only calling in a fake bomb threat to the school, but also by telling the Chinese-American students who talk badly about her in Mandarin to “speak f***ing English.” I had no idea to react here — the show asks us to sympathize with Leila, but her own internalized racism and need for attention makes the viewer despise her. Leila’s character is possibly the one that ruined the show for me, and is most simply described as a ‘hot mess.’

Grand Army tackles a lot of issues in its nine episodes — at times more than it can handle. The show’s intentions are mostly good, wanting to unpack white-feminism, casual and disguised racism, bullying, sexual assault, confusion around sexuality and difficult, broken home lives. Still, with all of this in mind, Grand Army achieves many of its goals, primarily its entertainment and production value. I wouldn’t say that Grand Army is a failure or a success, but I will say that the show has quite a bit of maturing to do, which I hope to see happen in the coming seasons, whose fates of renewal are yet to be decided.