Theatre, singing and other performance groups have been forced to redefine performances and practices 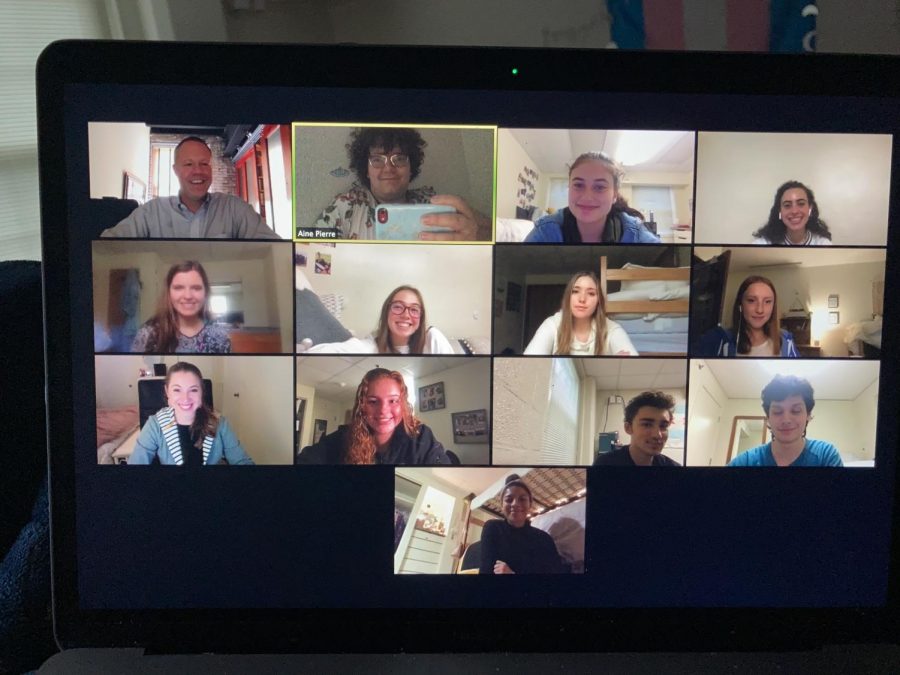 On Jan. 24, 2020, a sold out crowd of 600 people packed into Brendle Auditorium. Behind the stage curtains, members of the Wake Forest comedy group, The Lilting Banshees, held nervous but eager ear to ear grins. The lights in the auditorium dimmed. “Alive” by Lil Jon blasted through the darkness. The spectacle was on.

Now, 10 months later, the stage sits lonely in the dark auditorium. COVID-19 restrictions prevent any live performances from happening until at least the fall of 2021.

“It’s just disappointing,” said senior Alexi Vlahoyiannis, director of The Lilting Banshees. “It’s impossible to do a performance as we simply can’t be together as a group.”

For performing arts clubs, even getting approval from the administration to meet in person can be extremely difficult.

“We had to get approval from several different committees, and we have to stand 10 feet apart when we meet outdoors,” said Kaylie Jessup, director of the a capella group Minor Variation.

COVID-19 has disproportionately affected the U.S. creative economy. An Aug. 11 study from the Brookings Institution estimates losses of $150 billion in sales of goods and services for creative industries nationwide. Since then, that number has only grown. With the recent announcement that Broadway will remain closed until May, the light at the end of the tunnel for performers, directors, and viewers keeps getting farther and farther away.

“It felt like my community got taken away from me,” said Cynthia Gendrich, a professor of Theatre. “The thing I loved most about doing this work was taken.”

While in the midst of directing the spring play Into the Woods, Gendrich received the news that no students would return after spring break leading to the cancellation of the musical.

“When we had to let Into the Woods go, that’s when it hit me that I don’t want to be doing Zoom theater,” Gendrich said.

The spring release of the play was excitedly pushed to the fall.  However, Into the Woods ended up being canceled not once but twice. With the release of the COVID-19 guidelines for the 2020 school year, it became clear to Gendrich that the way performing arts were done in the past would not be achievable this year.

“We’ve never had a play stop in the middle,” said Jonathan Christman, director of University Theatre. “When it became obvious that they wouldn’t be able to perform, we knew we had to find an alternative way of making theatre.”

Any type of performing arts should be impossible during a pandemic. It is a profession dependent on the mass gathering of people. However, due to the creativity within the community, performing artists have found solutions to unprecedented problems.

Although difficult, Zoom theater, radio plays, streamed and pre-recorded videos and one-on-one over the phone experiences, have given the performing arts’ community hope.

“It’s a totally different medium,” Christman said. “Everyone is listening on their computer instead of as a collective.”

The performing arts have never seen a more difficult time to share its talents. But, to Gendrich, art should never fall silent in times of difficulty.

This past week the theatre department released Connected in the Deep, three radio plays about love and friendship, two of which Gendrich directed.

Connected in the Deep opens up with a message from Gendrich: “So many of us have been so isolated from one another over the past eight months that I wanted plays that reminded us about our human connections.”

Per those interviewed, the phrase “the show must go on” now acts as a battle cry in the performing arts community.

“If anything, I think that our community has gotten closer,” Jessup said. “We sort of depend on each other more.”

Moreover, with a Lilting Banshee live comedy performance nowhere in sight, the group has shifted into creating more online videos.

“Just the ability to laugh and forget about things is a way to get away from all the stress school and coronavirus brings,” Vlahoyiannis said. “We’ve been meeting as a group over zoom just to create some sort of normalcy.”

Although the Brendle stage still remains dark, and the future of live performances at Wake Forest sits in uncertainty, the performers who once provided the stage with light are working harder than ever to bring it elsewhere.