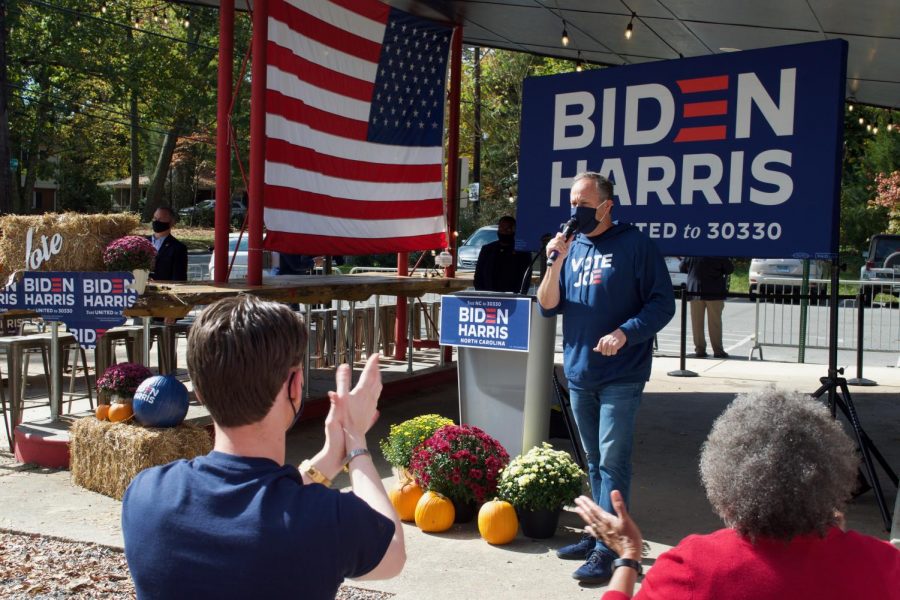 With just a week left until the election, Kamala Harris’s husband Doug Emhoff paid a visit to Winston-Salem on Monday morning to get out the vote.

This was Emhoff’s third trip to North Carolina campaigning on behalf of the Democratic presidential ticket, though he joked that he had visited the state “virtually” throughout the entire campaign. Harris made appearances in the western part of the state just last week, while both Joe and Jill Biden have also made periodic campaign stops in North Carolina.

“Joe Biden and Kamala Harris know that North Carolina is the tipping-point state of this election, and that’s why they’ve both visited the state several times,” Austin Cook, Communications Director for the North Carolina Democratic Party (NCDP), said. “Our state can be the one that sends Donald Trump packing, so we’re excited to have a full slate of surrogates visiting in the final days to make sure we turn out every voter we can.”

Sporting her converse sneakers, as is Harris’ signature look, Councilwoman and Mayor Pro Tem DD Adams introduced Emhoff in an impassioned speech pleading for voters to support the Biden-Harris ticket.

“We have to elect them to bring back respect,” Adams said. “America has now got to move forward and heal.”

According to Adams, as of Monday 120,000 people in Forsyth County had already voted at one of the county’s 17 early voting sites, almost half of the county’s population.

“Let’s talk about Nov. 3. We win in North Carolina, this is game over people,” he said. “We know it’s going to be close here though, inexplicably.”

The Democratic Coordinate Campaign, the combined efforts of the presidential campaign, the Democratic National Committee (DNC) and the North Carolina Democratic Party (NCDP) worked to build the crowd for the outdoor event held at Campus Gas.

“All of our events are in line with Governor [Roy] Cooper’s guidelines for N.C.,” Cook said. “We cap attendance for these events at a pretty low level.”

Attendees were required to wear masks, maintain social distancing and were subject to COVID-19 screening questions and temperature checks. The event stood in sharp contrast to President Trump’s campaign rally just last month, which seemed to flout all COVID-19 guidelines.

“Trump’s going around the country in these superspreader events, claiming we’re rounding the corner when we’re having record cases every single day, even right here in North Carolina,” Emhoff said. “It’s incomprehensible. We have to change course.”

Emhoff touched on the administration’s failure to trust science, which he says prohibits it from adequately addressing both the COVID-19 pandemic and the climate crisis. He laid out the Biden-Harris COVID-19 plan, which he says will involve wide-spread mask wearing, social distancing, free testing and treatment as well as comprehensive contact tracing. It will also involve relying on science to approve and distribute a vaccine, a process he stressed could not be executed properly by the president.

“[Distributing a COVID-19 vaccine under President Trump] will be a disaster of epic proportions. We need Joe and Kamala to do that,” Emhoff said. He also challenged Trump on the economy, which he claimed only works for those who own stocks or who benefited from the president’s tax cut in 2017.

“Do you know what I see in most of these towns? Boards and boarded businesses and signs saying ‘For Rent.’ That is what’s going on in this economy,” he said. “Most of them will not reopen if we do not change course. So we need Joe Biden to come in with Kamala. He did it before in 2008, 2009, and he’s gonna do it again.”

Above all, Emhoff made the case for why both Biden and Harris’s personal characteristics and years of political experience make them better fit to hold office than the current president.

Several groups of Wake Forest students, as well as students from other state universities, attended the event on Monday. Though many had already voted either by absentee ballot or through early voting, they were still eager to show their support.

“I have nothing to gain tangibly from being here but I wanted to come out, show my support, soak in as much as I can,” Ari Franco, a junior at UNC-Charlotte and a Winston-Salem native said. Franco attended with Julia Desmone, also a Winston-Salem native and a junior at UNC-Wilmington. The two are currently serving as Fellows for the Biden campaign.

Desmone said that for young voters like her, voting matters.

“I think there’s a lot of narrative being pushed that your vote doesn’t matter. That discourages people; it’s not true. Your vote absolutely matters and it’s important and we got to use our voice to move in the direction of enacting real change.”

Sitting right beside Franco and Desmone was a group of Wake Forest freshmen who learned about the event through the College Democrats club on campus.

“Even though most of us have already voted, I think it’s nice to learn more about how we can encourage our friends to vote,” freshman Schuyler Bordeau said. She decided to cast her vote at Winston-Salem First Assembly of God, the new early voting polling site just across from the entrance to campus on Polo Rd.

Anna Wexler, also a freshman, echoed the importance of creating energy and enthusiasm among Wake Forest students in the days leading up to the election.

“I think it’s super important to really motivate everyone, especially in North Carolina since it’s such a pivotal state,” Wexler said. “With the election getting closer and closer, kind of just getting that hype going in Winston is really important.”

Biden campaign volunteer Kristen Downs noted her excitement at the prospect for Emhoff and Harris to make vice-presidential history.

“I am hoping that we’re gonna see the nation’s first, second man today and then maybe one day the first, first man,” she said.

In phone banking for the campaign, she has felt that there is a lot of enthusiasm surrounding the election, though it may be more difficult to detect in the midst of the pandemic.

“Everyone seems to have a voting plan,” Downs said.

Sitting next to Downs was her 13-year-old daughter, whom she pulled out of school to attend the event.

“We saw Hillary [Clinton] and Michelle Obama at the convention center four years ago and we left there with a lot of enthusiasm only to be extraordinarily disappointed. So I think just a week out, just to get fired up again is what we’re hoping for,” Downs said.

The majority of the attendees sported their Biden-Harris buttons and t-shirts, making it clear they did not need to be convinced by Emhoff to cast their vote for the Democrats. They’re ready to do their part in helping the duo cross the finish line.

“Everyone is terrified of another four years of this nonsense because we literally cannot afford it. Our democracy is at stake, our very lives are at stake people, so we need urgency,” Emhoff said. “We don’t want to wake up on Nov. 4 thinking we could have done more.”