The university will add contract workers to its COVID-19 dashboard, after a positive case on Tuesday 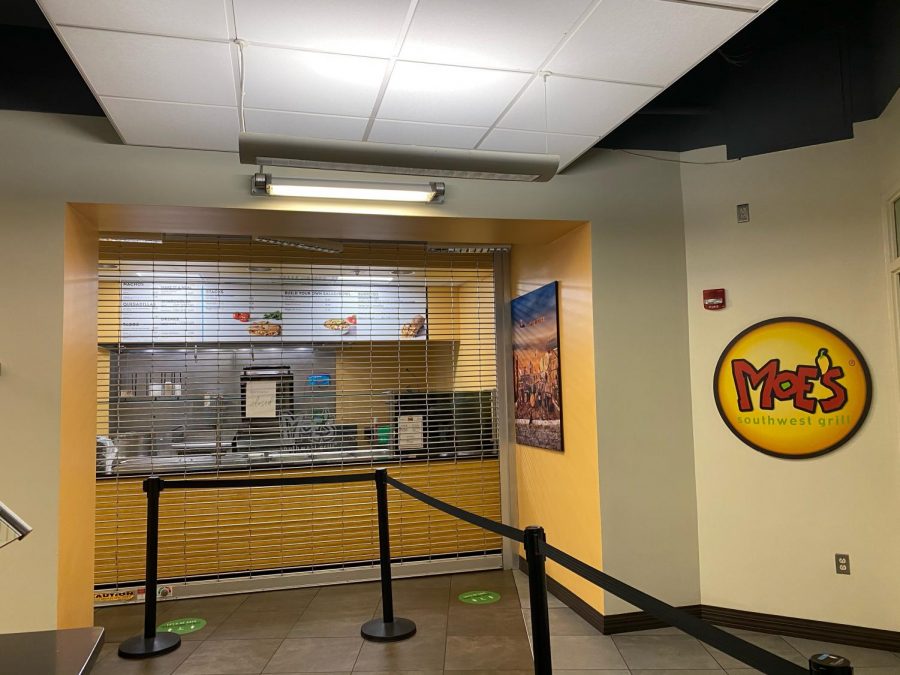 On Tuesday night, students hoping to find some Tex Mex food in Benson University Center came across an unexpected sight even during the COVID-19 pandemic, as Moe’s was the only restaurant in the Benson Food Court with its doors closed.

The episode repeated itself again on Wednesday morning when Moe’s, usually open during lunchtime, only opened its doors at 1 p.m. The reason: a positive COVID-19 case among one of its workers.

According to a Moe’s employee — who will be referred to using the gender-neutral alias Chandler to protect their identity — a worker from the morning shift tested positive at the beginning of the week, prompting the restaurant to temporarily close its doors and quarantine all of its morning staff.

As of Wednesday, only one of Moe’s employee tested positive, while other workers from the morning period are waiting in quarantine for further testing before being cleared back to work. Since then the restaurant has been sanitized and all the workers who are still working are believed to not have been in contact with the individual who tested positive, as they work in an alternate shift.

Moe’s will now be operating under reduced hours between 1 p.m. and 7 p.m. for the upcoming weeks until most of its staff is cleared back to work, according to Chandler

Yet, the positive case and its trickle-down effect on the restaurant’s schedule serve as a reminder of how contract workers are at the forefront of social interactions on campus and how vulnerable that can make them sometimes.

A week after Wake Forest switched to Orange operation status after its largest COVID-19 outbreak to date, the university has now decided to also include cases among contract workers to the dashboard.

“You may see faculty and staff positive [cases] go up this week because we are adding contract employees to the dashboard,” said Associate Dean for Student Engagement Tim Wilkinson during the Student Government Senate meeting on Tuesday. “My understanding is that there will be no distinction between contract employees and exempt or non-exempt employees.”

According to Vice President for Campus Life Penny Rue, the delay in adding contract workers to the dashboard is mainly due to the need to ensure that cases are reported in a “de-identified” fashion.

“We had to work closely with the administrators of the companies who employ our contract workers to gain the requested information in a de-identified way. The information is protected health information, so health officials and those that provide care do not have access to the identities of positive individuals, including students.”

The university is also increasing its random testing efforts from a previous average of 500 tests per week to 1,400 weekly tests moving forward, as reported in this week’s Student Government report.

However, according to Chandler, Moe’s employees have not been subject to any random testing since the start of the semester, indicating that contract workers are not eligible for asymptomatic testing on campus.

Chandler explained that the university has been monitoring Moe’s employees through daily temperature checks and self-reported symptoms using the SneezSafe app, but the workers are largely responsible for arranging tests for themselves.

Rue clarified that faculty and staff are eligible for testing when “clinically indicated” after symptoms or close contact with a positive case has been reported.

“Faculty and staff who are exposed or are symptomatic would record this on the daily SneezSafe platform. That would trigger outreach from our new Employee Health Clinic, which provides testing as clinically indicated,” Rue told the Old Gold & Black in an email response. However, she did not provide details on whether contract workers have been tested regularly by the university as part of its asymptomatic testing.

The administration believes that the majority of new cases reported on campus over the past week have come from small student-to-student social interactions instead of a large superspreader event.

“We don’t have any evidence of a superspreader event on campus or among students … It is more likely [that cases increased] due to an increase in engagement within the community,” said Student Health Service Director Dr. Cecil Price.

As of Wednesday, 220 out of 370 total quarantine rooms available between the Best Western Plus and the Hawthorne Inn, the university’s official quarantine location, have been occupied, reaching 60% of Wake Forest’s quarantine capacity after last week’s surge.

Yet, according to Rue, there are no reasons for concerns over capacity issues, as the university is set to release 114 students from quarantine over the next five days.

“I understand that faculty and staff cases are related to off-campus exposures. They got it from their family or … contact with their local community. They just happen to work here, had symptoms and then get tested,” Dr. Price said. “Our infections disease and public health consultant has said that the classroom [setting] may be the safest place on campus because of social distancing, students and faculty wearing masks and these pretty clear guidelines … so that is a pretty safe space.”

The same cannot be said about dining areas and residence halls, where “close social contact” is more common, representing a higher infection risk among students and contract workers.

To address that concern, on Oct. 22, President Nathan Hatch initially announced as part of the new guidelines under the Orange operating level that the university would temporarily only offer take-away dining options for 10 days.

However, the measure never went into effect and it was later clarified that there was a misunderstanding in the announcement and that although indoors sit-down dining is discouraged at this time, it is still available to students.

“Indoor sit-down eating is discouraged, but indoor dining spaces remain open. This is a clarification to the Oct. 22 message to campus regarding the shift to Orange, which indicated the university would provide take-away dining options only. Take-away dining is recommended, as reflected on the Our Way Forward site,” said Director of News and Communications Cheryl Walker.

The 10-day period is set to end at the end  on Oct. 31, also Halloween day, provided that another surge in cases does not occur.

“We know students want to enjoy what is usually a very festive weekend, but you all know that the only safe way to gather is to stay in your pod. Luckily, Halloween is perfect for mask-wearing,” Rue said. “We will remain vigilant for outsize gatherings in both the neighborhood and on campus.”