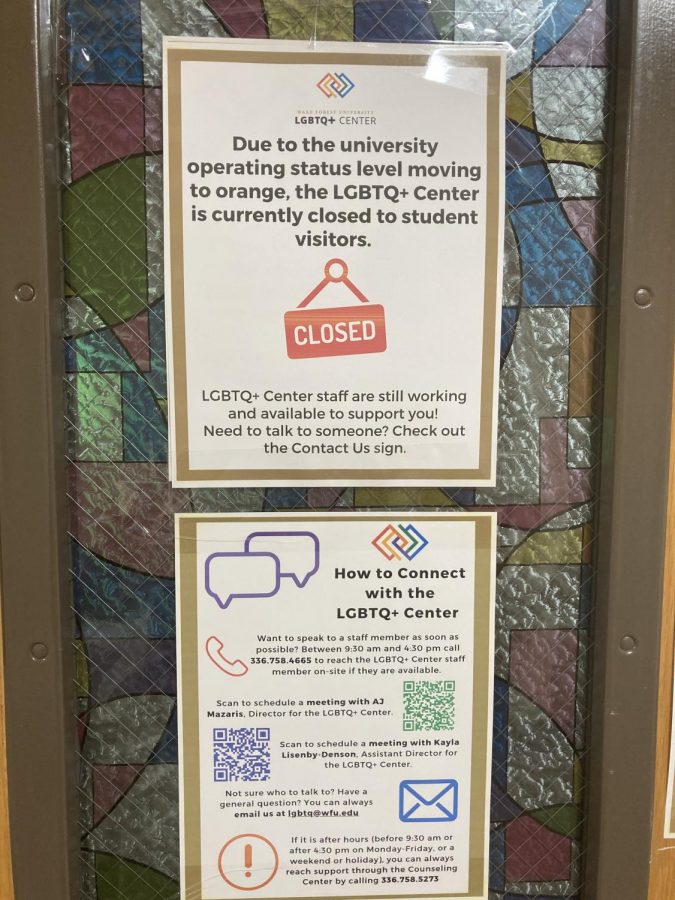 The Wake Forest Women’s Center and LGBTQ Center are embracing the shift to a virtual schedule amid the pandemic.

Since the university went virtual in March, the two identity spaces, which are neighbors in Benson University Center, have been creating, refining and adapting their virtual programming. Representatives from both the Women’s Center and the LGBTQ Center stressed the importance of maintaining and building connections amid the COVID-19 pandemic.

“We felt that with the shift that there was a lot of emotion running high, so we felt it was really important to build community,” said Erin Adamson, assistant director of the Women’s Center. “Moving forward, we always try to keep community in mind whenever we’re building a program.”

For the LGBTQ Center, this meant moving its identity spaces — discussion groups that focus on a major identity on the queer spectrum — to a virtual setting. This year, the center is offering identity spaces for queer first-year students, trans students and queer students of color.

“It’s looked a lot different this semester … but we’re trying to give tools to … people who may be struggling to compensate for the lack of physical community,” said senior Antayzha Wiseman, a student assistant at the LGBTQ Center.

To that end, the center has tried to use certain features of Zoom to allow students to become more connected, even though the virtual meeting platform can feel largely impersonal at times.

“We might think about breakout rooms, or even games, or some opportunities for students to be connecting with each other … and break down the barriers and the awkwardness of seeing rows of faces,” said Dr. AJ Mazaris, director of the LGBTQ Center. “We’ve also tried to encourage students to … use the chat to support or affirm things that [they’re] hearing.”

For the Women’s Center, the move in March to virtual programming meant canceling most in-person Women’s History Month events that were planned for the latter half of the month. However, the center created new programs, such as virtual office hours and “Wake Up With the Women’s Center” to engage the community.

“[‘Wake Up With the Women’s Center’] was a self-care check in, it had morning yoga, morning meditation, journaling,” Adamson said. “[We are] trying to check in with these students and colleagues that we might not see as frequently, saying ‘we know there’s a lot going on, how can we help you center yourself and center your emotions?”

A major struggle for both centers this year has been the integration of first-year students into their respective communities.

“[Freshmen] don’t have those connections with other students, because it wasn’t forged through that closeness, that sense of community. That’s the only thing that’s been a struggle, making the freshmen feel like they have a community to the point where they want to show up to online programming,” Wiseman said.

“We’re trying to be intentional with the L.E.A.V.E.s to reach out to people and say ‘Hey, I notice you came to our event, do you want to grab lunch sometime?’” Adamson said.

The Women’s Center has also found success in collaborating with other organizations, such as the Office for Civic and Community Engagement (OCCE). Per Adamson, their most popular event was actually in collaboration with the Center for Jewish Life, a candlelight vigil following the death of Supreme Court Justice Ruth Bader Ginsburg.

“We’re not the only people who have had our lives turned upside down, other student [organizations] have as well, so there’s more areas for collaboration in that sense with the change to virtual formatting,” Adamson said.

The LGBTQ Center, for its part, has found success when it channeled parts of virtual programming that make it easier for questioning and closeted —  meaning not out as LGBTQ — people to attend programs. A clear example of this was the center’s event on coming out.

“We invited students who were not out and would not normally come to an LGBTQ Center event, and we were really intentional … we turned off people’s profile pictures, [and we] gave people an opportunity to engage in the space that would have been challenging to do in-person,” Mazaris said. With the combination of disabling profile pictures and changing display names, it would be possible for someone who is not out to completely hide the fact that they were at the event.

Now, with last week’s move to an Orange operating status, the two centers have ceased all in-person operations. However, both Mazaris and Adamson encourage members (and non-members) to reach out to the centers if there is any issue whatsoever, or anything that a student wants to talk over.