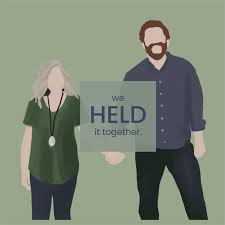 We Held It Together is hosted by a newlyweds Ashton and Robert (Photo courtesy of podcasts.apple.com)

While this isn’t a great excuse, sometimes I feel as if I am too busy to listen to podcasts or even read novels that aren’t assigned for a course in which I am enrolled. Although, over quarantine this changed as I had more free time and was able to delve into these educational resources without hesitations, amid a lack of social obligations. This lack of social interaction is problematic in many ways, but can also be viewed from a positive lens as there is an abundance of available time which can be used in any way desirable.

For me, quarantine was a time of distress as my anxiety, which was present prior to the pandemic, was heightened. I could sit for hours ruminating on my fear of the future. I also began to truly understand the stigma around talking about mental health. So many people struggle with it, yet it always goes undiscussed. This alone makes people feel isolated and abnormal when in reality this is not at all the case. I was talking to my extended family about this and they recommended I listened to the podcast titled We Held it Together.

This podcast is by Ashton and Robert Caldwell, a recently married couple. Upon getting married, it became clear that Robert struggled with severe post-traumatic stress disorder (PTSD) after returning from serving overseas. This PTSD resulted in drug abuse and life altering side effects which prevented him from being able to function normally. Later on, he was diagnosed with bipolar disorder as well. Adding to the severity of his mental health issues.

To make matters worse, Robert was in and out of a variety of medical institutions, many of which were expensive and did little to help his mental status. Shortly after, Ashton and Robert’s house were destroyed in a fire. Ruining many of their prized possessions and forcing them to uproot and move during a chaotic and unsettling time. Furthermore, Ashton had just opened up a store to purchase bridesmaid dresses. Therefore she was trying to balance tending to her husband’s needs while keeping her new business afloat.

While all of this was happening, they grounded themselves in their faith and vows in marriage to one another. This alone is why I recommend this podcast. If he can struggle and learn to cope with severe mental health obstacles during such a traumatic time, I can learn to do the same with anxiety. I recommend this podcast to anyone that sees the stigmatization around the discussion of mental health problematic, as this opens many doors to the opportunity to change this. What if everyone spoke so openly about their struggles with mental health? How would that better society and give people an outlet to express themselves completely without fear of being ostracized and misunderstood? I personally think open dialogue would be revolutionary in the fight to end the stigma around mental health issues.