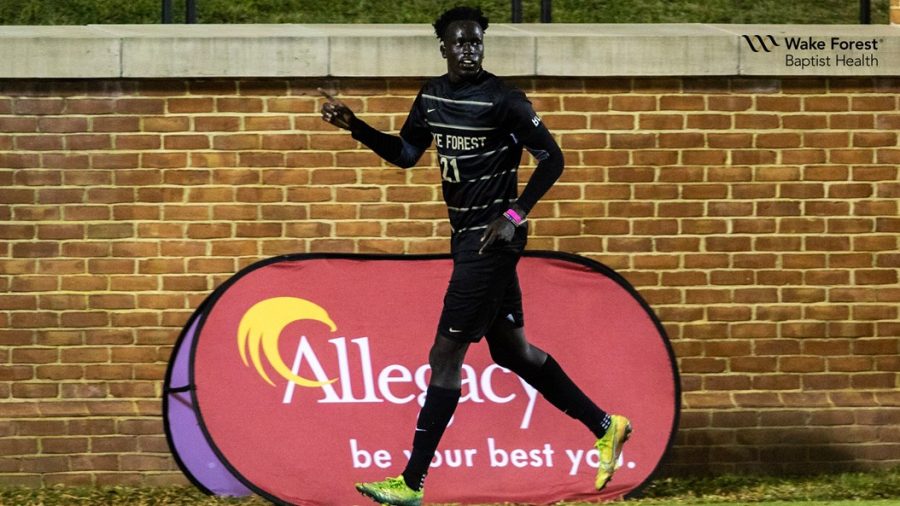 Revenge is a dish best served cold. After suffering their first loss of the season to Clemson a few weeks ago, the Wake Forest Men’s Soccer team struck back and avenged their defeat with a resounding 2-0 victory on senior night at Spry Stadium.

It was a pivotal matchup for the top position in the ACC South division. Due to the COVID-19 pandemic, the ACC changed their typical Atlantic and Coastal divisions into North and South divisions. Wake Forest was placed into the South division, which is widely considered the more difficult division as it contains nine of the last 10 Atlantic and Coastal division champions. Heading into the matchup, Clemson led the ACC South with 10 points, while Wake Forest was behind with nine points but had played one less game. The winner of the match would likely be the winner of the division.

Before the game, the six seniors on the Wake Forest team were recognized for their contributions to the program. Goalie Dominic Peters, defender Tyrrell Moore, midfielder Kyle McCurley, midfielder Justin McMaster, forward Machop Chol and defender Michael DeShields have been a part of some of the most successful teams in the history of Wake Forest Soccer. They were all part of the 2019 College Cup run, the 2017 ACC title and have led the Deacs to 17 more wins than any other D1 program since 2017.

The nationally second-ranked Wake Forest and nationally third-ranked Clemson teams were very evenly matched throughout the first half, with Wake Forest getting off five shots while Clemson took six. Wake Forest redshirt junior goalie Andrew Pannenberg had a tremendous first half and recorded four saves to keep the Tigers off the scoreboard. Pannenberg’s quick reactions in the net have helped the Deacs record three shutouts on the season.

Sophomore defender Nico Benalcazar broke the stalemate in the 40th minute to put Wake Forest up 1-0. Benalcazar brought the ball up from the back and sliced through the Clemson defense like a hot knife through butter. When the Clemson defense started to collapse on him 10 yards in front of the center of the box, Benalcazar deftly passed the ball to freshman defender Jahland Forbes who was on his left side. Forbes dribbled the ball down the left side of the box and beat a man to cross the ball back towards the center. The low cross took one hop and Benalcazar hit the ball with his knee and sent it into the net. The goal was the third of Benalcazar’s career and the assist was the first of Forbes’ career. The Deacs preserved the 1-0 lead going into halftime.

Wake Forest’s defense played exceptionally well in the second half and did not allow a single shot on goal. Sophomore forward Calvin Harris doubled Wake Forest’s lead in the 64th minute off an assist from Machop Chol. Clemson was pressing up near the Wake Forest goal when Wake Forest regained possession. Sophomore midfielder Takuma Suzuki received the ball halfway between the midfield line and the Deacs’ goal. He then heaved a long vertical cross down the right side of the field where a sprinting Machop Chol met the ball. Chol used his speed to separate from his defender and dribbled toward the Clemson net. He was steps in front of the Clemson goalie when he nutmegged the keeper and crossed the ball on the ground. Harris was running toward the net and when he was just a few feet in front of it when he met the ball. Harris one-touched it and sailed it into the back of the net to double the lead to 2-0 and seal the deal for the Demon Deacons. The goal was Harris’s fourth of the season and tied him with junior Kyle Holcomb for the most on the team.

The final score of 2-0 put the Deacs season record at 6-1-0 and the victory clinched the ACC South division title. For his superb play, Benalcazar was named the ACC Defensive player of the week. Wake Forest’s final regular-season game is on Nov. 7 at NC State University.