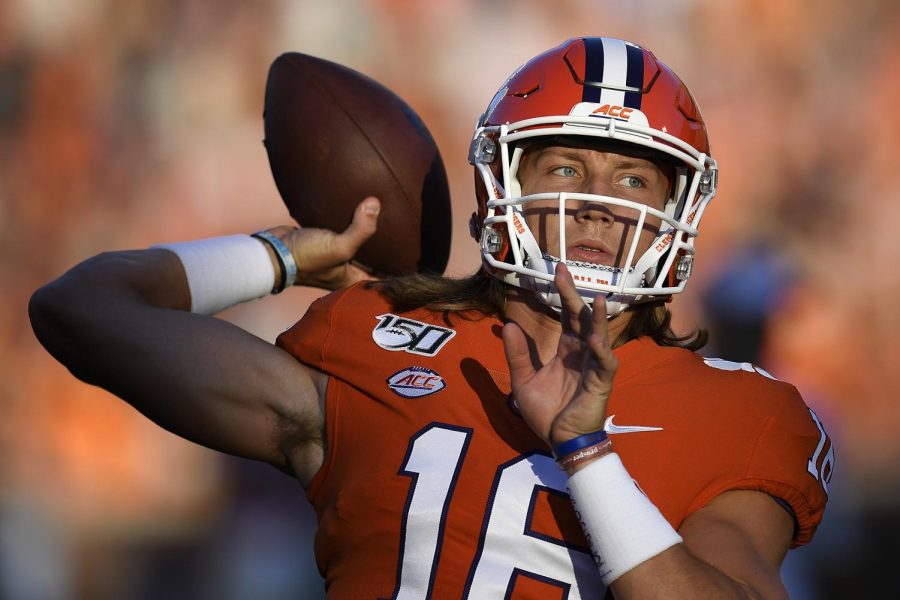 The projected No. 1 overall pick in the upcoming NFL draft will miss Clemson’s matchup with No. 4 Notre Dame on Nov. 7 (Mike Comer/Getty Images/TNS)

Last Thursday night, tragedy struck the Clemson University campus, and with it, the entire state of South Carolina. Tigers quarterback Trevor Lawrence tested positive for COVID-19 and was ruled out for Saturday’s game against Boston College.

According to NCAA COVID-19 protocol, players who test positive must remain in isolation for 10 days before they can return to participating in team activities. This means that the Tigers will be without the Heisman Trophy frontrunner when they take on #4 Notre Dame in South Bend, Ind. on Saturday.

Clemson’s team-wide results returned on Wednesday, and luckily, Lawrence’s was the only positive test. In a statement released Thursday night on Twitter, Lawrence described his symptoms as “relatively mild” but it is unclear to what extent that means.

True freshman D.J. Uiagalelei (pronounced oo-ee-AHN-gah-leh-lay) may have received his first collegiate start with the only indicator being Joe Tessitore mentioning such every five minutes during the broadcast. Uiagalelei threw for 342 yards with a 73% completion rate and added an additional 42 yds on the ground.

The 6-4, 250-pound quarterback showed extremely high levels of confidence and composure as he converted needle-threading passes at key points in the game. Arguably Uiagalelei’s best play of the game came on a precise back-shoulder dart to Amari Rodgers at the goal line, catching both Boston College and Clemson fans by surprise.

Uiagalelei’s performance on Saturday helped the Tigers overcome an 18-point deficit and avoid being upset by an unranked opponent. This pe bodes well for the future of the Clemson football program considering that this season will likely be Lawrence’s last before declaring for the NFL draft.

Defensive struggles early on against Boston College allowed the Eagles, led by quarterback Phil Jurkovec, to run up the score and capitalize on the rare mistakes of the nation’s best defense. The Tigers were able to regain their footing and hold the Eagles to zero points in the second half, but lost defensive standout Xavier Thomas for the first half of next week’s game against Notre Dame after a sloppy targeting call with three minutes remaining in the game.

Lawrence will be eligible to return following next week’s game, so expect to see him under center against Florida State on Nov. 21. Some have raised concern that college football’s golden boy may not want to return once he’s medically cleared to do so.

The projected first-overall pick will graduate in December and could very well opt out of the rest of the year to prepare for the NFL draft in the spring.

Lawrence was one of the players at the forefront of the #WeWantToPlay initiative, calling for a 2020 season back when the possibility of playing was uncertain. Besides a season, the de-facto leader backed by players across the nation called for universal mandated health and safety procedures, the opt-out option, an additional season of eligibility and the formation of a player’s union. The latter has not been approved, as the power hungry NCAA maintains their merciless grip on the monetary rights of teenagers putting their bodies and health on the line for the sake of our entertainment.

Clemson has seen a spike in positive cases following their home football game last weekend, and if past trends hold true, will most likely experience another one after their upcoming home game against No. 4 Notre Dame.

The Clemson COVID-19 dashboard was last updated Oct. 29 and then again on Nov. 3, displaying an overall trend that positive test results during the past month have been decreasing. This comes despite the fact that total daily tests have climbed to nearly 3,000 a day.