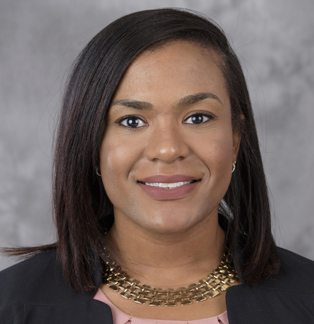 Recently named the Title IX director at Wake Forest University, Aishah Casseus brings great ideas and significant experience working with Title IX regulations from her previous roles as the interim Title IX director at Florida State University and EEO director/Title IX coordinator at Winston-Salem State University. Casseus is also a licensed attorney in North Carolina and she earned her J.D. degree from North Carolina Central University in Durham, and her legal career led her to become involved with Title IX.

How did you get involved with handling Title IX policies?

I studied a lot of different things: administrative law, policy, rulemaking, specifically equal employment opportunity (EEO) was what I was mostly interested in, so I concentrated in law school in constitutional law and civil rights. So, I went out into the world and did a number of different things in the civil litigation area.

Then, I was on a train on my way to work one day, and I was reading an article that had to do with lawyers and they were talking about [the law’s role in dealing with] sexual misconduct. I’m really speaking about how this has gotten a lot more litigious and with the requirement of having talent coordinators in colleges and universities that would likely start looking at attorneys or legal practitioners generally to assist in that type of work.

When you’re talking about Title IX, although it’s fairly new and the “Dear Colleague” letter and the Department of Education has given more and more guidance, you could really be a part of something that you can be a subject matter expert in because it’s growing and developing while you’re in it. It’s new, and it’s something you can get a full handle on.

So, I started doing some research on it, I listened to some podcasts, I read more articles, and I started just looking at the jobs out there. It really was limited to coordinators and Title IX investigators, and I like the investigation period. You’re likely investigating, asking questions, trying to get information, and trying to analyze the information and determine what happened.

I’m a licensed North Carolina attorney and I knew I wanted to move back to North Carolina, so I headed to Winston-Salem and started working for Winston-Salem State University. I was their Title IX coordinator and EEO director. EEO is something that I always wanted to do, so I handled those investigations into those programs.

Wake Forest had a search team for this job and that firm contacted me. I really appreciate them reaching out to me. I met the search committee, too, and I was impressed that they had a cross section of campus that was really engaged, understood Title IX and really wanted to be a part of the conversation now that we had a new regulation.

If I’m being honest, I wasn’t looking for a job when I was approached, but when I met the search team, I was really impressed about what the campus was doing as it relates to Title IX. I was also relieved, because I actually thought that Wake Forest was a larger institution as far as student population and I knew I didn’t want to be in a school of like 30 or 40 thousand [undergraduates], because I don’t think you have the opportunity to make the type of connection to impact that I like to make.

Meeting the team that they had put together on campus and talking to them about what they are doing and have been doing was really impressive, so I think right around that time, I decided that I could see myself at Wake Forest.

What was it like to transition to a new position around the same time that the Department of Education announced new Title IX regulations?

It was pretty tough.The whole country, every university getting federal funds  — which is the last time I checked, all universities except two — were making these changes in 90 days, which is unheard of and during the pandemic. So, it was stressful for a couple of reasons.

One was because I was doing this work at my job at Winston-Salem State, and I wanted to make sure that I didn’t leave them without having what they needed to be successful, too. You have that level of loyalty and pride in your work.

I’m also thinking, how am I going to transition this way? I think what was great for me when I first met with the search committee was that even though you’re being interviewed, you’re also interviewing your potential employer.

So, it was important for me to determine what Wake Forest’s decisions were. When I heard Wake Forest’s decision, I knew they were in line with where I stood. I wasn’t as concerned coming into Wake Forest  knowing that there’s work to be done as far as making people understand what we’re doing, but that I didn’t have to convince anyone about what we should do.

What has been your favorite part so far?

I think my favorite part has been meeting people and trying to understand where everyone fits in the organization chart, what their responsibilities are, how that connects to my office and how we can collaborate differently. This month has really been about taking information in and I think it’ll continue that way.

When I got to Florida State, the Title IX Office was moved, so we got a lot of work about educating the campus and making them understand what we’re doing. When I came to Winston-Salem State, it was kind of the same thing because the department was new.

I think Wake Forest is not that same list and the campus community has a good understanding of Title IX, its necessities and why it’s important. It’s not really about me doing that work, so it’s challenging me in a different way to figure out how I should prioritize what’s important over what’s not important.

Do you have any specific goals for the rest of the academic year?

Although I know the campus and the campus community knows a lot about Title IX, what’s great about colleges and universities is that we get new people every year, so you still have to socialize your policy and your process. You still have people that you may have not touched.

And then, really with the regulations changing and the confusion about what that means for certain campus community members, it’s important that we’re having those discussions, that we are socializing what our process looks like and making it more accessible.

What I want students and faculty members and staff members to understand is that we shouldn’t be hard to access. So, just breaking down those barriers, understanding what we do and, ultimately, the autonomy you have and making your decision is what I want to express the most. I would say just socializing the document and understanding what our framework will be moving forward will probably be our short-term goals.