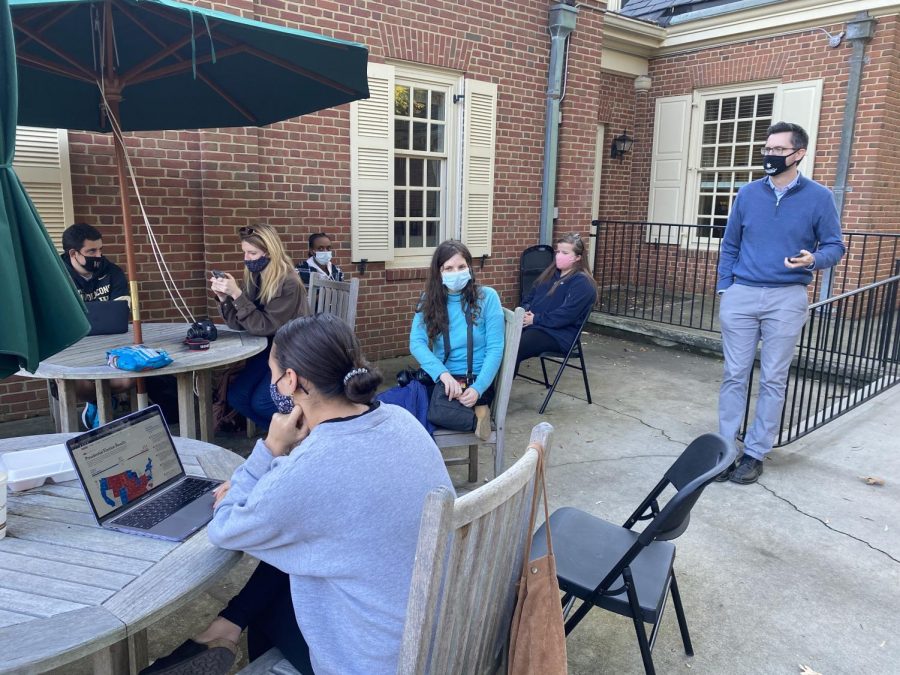 On Wednesday afternoon, as the world held its breath for the results of the American presidential election, a group of students, faculty and fellows gathered in front of Starling Hall to grapple with the ambiguity shrouding the world after Election Day.

Facilitated through the Program for Leadership and Character, the hours-long, pop-in discussion group provided a safe space for students to share their concerns surrounding the election.

“As a college programming administrator, I really learned four years ago that there tends to be a lot of programming in the run-up to an election and an empty space after the election,” said Ann Phelps, Director of Programming for Leadership and Character. “That void, students sort of long to fill it, especially in a year like 2016 when everyone regardless of political affiliation was surprised, was caught off-guard.”

The Program for Leadership and Character was one of many organizations across campus programming events during and post-election. In sharp contrast to Wake Forest’s environment in 2016, there were no gigantic watch parties this year. And with the stakes seemingly higher than ever, counseling and support have taken a lead role on and around Tuesday night.

“I feel like any other day, if I’d been sent an email to come hang out at Starling Hall, I probably would have ignored it just with the intention of, ‘I’m too busy,’” said senior Mary Costanza, who attended the Leadership and Character gathering. “But I feel like with the election and all the chaos, it’s a day when you really need to be around other people.”

Sarah Costanza, a freshman who also attended, agreed. “It’s really nice just to not sit in your stress alone,” she said, “to sort of find comfort in the fact that we are all stressed, but that we are feeling in the same way that we’re not alone.”

In a socially-distanced environment, the comfort of community has been the hallmark of many organizational efforts. Michelle Nicolle, the chaplain for the Wake Forest School of Medicine and Innovation Quarter, is hosting a discussion series called “The World is On Fire: Now What?” It is open to students, faculty and staff.

“If the group is comfortable being vulnerable with each other, it can be a very powerful time of feeling heard and connected,” Nicolle said. “This is more social justice, how do we be in a world with so much conflict? We see from the results today that we’re pretty evenly divided as a country, so how do we be in this space and live with our values and our own ethics and the ethics and values of democracy?”

Other organizations undertook outreach efforts before the results starting rolling in Tuesday night. On Election Day, the Chaplains Office held 30-minute mindfulness sessions throughout the day to relieve stress. The sessions were available to all students, faculty and staff and took place at 7 a.m., 12 p.m. and 4:30 p.m.

The LGBTQ+ Center, meanwhile, put together a Post-Election Community and Self-Care Toolkit. The packet gives students advice on how to care for themselves and those around them following the election, and provides a list of campus resources that they can access. The packet, curated by J Vu Mai, outlines political realities in this year’s election.

“The following toolkit is first and foremost, an acknowledgement that this year’s election will inevitably impact people’s lives,” it states. “Regardless of the outcome, white supremacy exists; homophobia and transphobia exists; ableism exists; xenophobia exists; colonialism exists; poverty exists; systems named and unnamed that shape the fabric of our lives constantly, with and without our permission, exist.”

As votes continue to be counted, individual crisis support remains open. According to Deacs Decide, “students may call 336-758-5273 to access mental health support.”