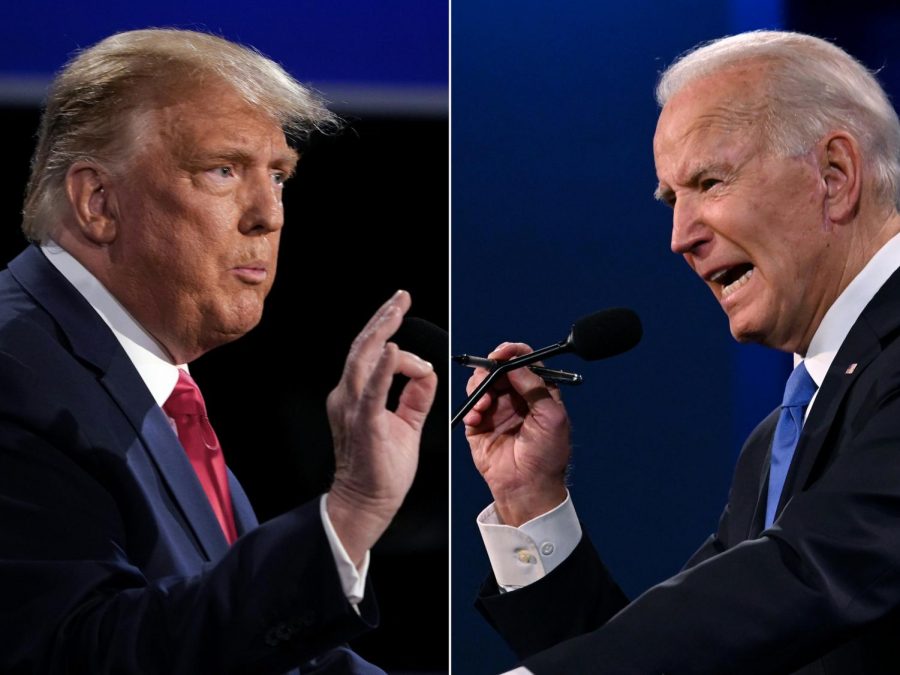 The presidential race between President Donald Trump and former Vice President Joe Biden continues to be contested as key battleground states like Pennsylvania, Arizona and Nevada have thousands of uncounted ballots remaining (Brendan Smialowski and Jim Watson/AFP via Getty Images/TNS)

These are the answers from Wake Forest students to a simple question posed by the Old Gold & Black on election night: how are you feeling?

More than 24 hours out from when the polls began to close on Nov. 3, we still do not know who the next president will be. Depending on what news organization  projections you are looking at, the amount of electoral votes belonging to each candidate varies. According to The New York Times, which has been more modest than organizations like the Associated Press, there is still no call for the following states at approximately 12 a.m. on Thursday morning: Arizona, Georgia, Nevada, North Carolina and Pennsylvania. Biden is currently at 253 electoral votes and Trump is at 214, leaving 71 electoral votes up for grabs for the candidates to reach the 270 threshold.

“Certainly, we can expect litigation in the aftermath of the election, just as there has already been plenty of litigation in the lead-up to election day. Issues in Pennsylvania are likely to attract particular attention, especially regarding the handling of ballots received after election day,” Politics and International Affairs Professor John Dinan said on Nov. 4. “The U.S. Supreme Court declined to intervene before the election in litigation concerning an extension of the ballot-receipt deadline, essentially putting the matter off until after the election; but several Justices signaled at that time that the Supreme Court may have to address this issue after the election, and they may well be right.”

The full results from the North Carolina election will not be finalized until Nov. 13, as the state will be accepting ballots postmarked by election day up until Nov. 12 and will work to count provisional ballots through the coming days. So, while we may know which candidate has reached the threshold of electoral college votes to be declared the winner before then, North Carolina may remain uncalled for as long as a week.

Despite the fact that no projections have been called for the North Carolina Senate race, Incumbent Senator and Republican Thom Tillis declared victory over Democratic candidate and former N.C. State Sen. Cal Cunningham late Tuesday evening. Cunningham has not conceded the race, and his campaign has made a statement calling for every vote to be counted before a call is made. According to The New York Times, 94% of the vote has been counted: Tillis is currently sitting at 48.7% of the vote and Cunningham is lined up at 46.9%. The Libertarian candidate Shannon Bray received 3.1% of the vote thus far. In terms of the presidential race, Trump is at 50.1% of the vote and Biden has received 48.7%.

“There is naturally a lot of interest in when a race gets ‘called’ by the Associated Press or television networks, but it is important to stress that this has no legal significance. The outcome of a race is formally determined and certified through a process where the state board of election plays the key role,” Dinan said. “That is what matters legally, and not when a given news organization concludes that the outstanding ballots are not numerous enough to change the current margin between the candidates.”

Despite the fact that no official call has been made, Dinan explained that it is “highly unlikely” for Biden and Cunningham to make up their respective vote deficits when the full results are made available.

Of course, there was much more on the ballot in North Carolina than just the presidential and Senate races. Notably, Kathy Manning won the congressional election in the newly formed 6th Congressional District — which comprises Forsyth and Guilford counties. Governor Roy Cooper also won reelection by a comfortable margin of four and a half points, beating out Republican challenger Dan Forest. However, Democrat Yvonne Lewis Holley lost the race for Lieutenant Governor to Republican Mark Robinson by a four-point margin. Republican State Treasurer Dale Folwoll beat out his challenger in Democrat Ronnie Chatterji by a six-point margin.

“Even in a polarized era, voters still evaluate governors on their own merits and without as much regard to the party as they do when evaluating nearly all other offices.  In fact, just yesterday a Republican governor was re-elected in Vermont at the same time that the state was voting overwhelmingly for Biden,” Dinan said. “And so it is not a surprise that North Carolina voters voted to re-elect Cooper as governor even while casting different votes for a number of other races on the ballot.”

Communication Professor Allan Louden, an expert in campaign advertising, stressed that it is difficult to tell which ads affected the outcome of the senate election.

“The most likely influence was the Thom Tillis series of ads that were rebroadcast of news programs accusing Cal Cunningham of not being ‘honorable’ — referencing an affair scandal, without directly doing so. These ads, along with several outside groups, ran constantly in what had been a likely pickup [state] for the Democrats and [ultimately] became a [likely] narrow 1.8% loss for their candidate. The ads undoubtedly kept this issue alive and before voters,” Louden said. “Most of the other races the ads didn’t make much difference. One exception may be Cooper’s ads calling out Forest’s non-masked rally meetings. Most everything else was not memorable.”

Louden, who studied more than 5,000 ads this election cycle, believes that the role of social media and groups like The Lincoln Project most affected the presidential race.

“The Lincoln Project’s ads not only were in the battleground states they were all over social media. [Their] spots were produced with the quality that would rival commercial ads and had a uniqueness/cleverness in message that rivals any past campaigns. Along with several other groups, most notably MeidasTouch, we were awash in ads that were aimed at converting typically Republicans being given permission to oppose Trump, whereas most advertising is to jimmy up the base,” Louden said.

College Democrats and Republicans have been pivotal organizations this semester. Both presidents shared their thoughts on Election Day with the Old Gold & Black. College Democrats President and senior Sam Horowitz noted the group’s elation for of Cooper’s win and Manning’s win in the new 6th Congressional District.

“We are also excited about the prospects of a Biden presidency. If elected, President Biden will not only advance progressive legislation, but he will redirect our energy toward unity and solidarity as we continue to battle the coronavirus and racial injustice across the nation,” Horowitz said. “That being said, we understand that it is hard to wait for the results of such a consequential election. We urge the campus community to be patient so that every legal ballot can be counted throughout the country. No candidate can proclaim themselves as the winner. In a democratic society, power comes from the voters, and we look forward to hearing every American’s voice in the days to come.”

College Republicans President and senior Lisa Highet echoed the importance of having solidarity as a campus community in a statement to the Old Gold & Black.

“As president of College Republicans, it is my hope that no matter what the outcome is of the presidential election, it is important that we support our republic and fellow students who may hold opinions which differ from our own,” Highet said.

Marianne Magjuka, the executive director of the Office of Civic and Community Engagement (OCCE), has helped to spearhead the Deacs Decide initiative alongside OCCE Assistant Director Deb Marke. Magjuka emphasized that much of the turnout from Wake Forest students occurred during the early vote period rather than on Election Day, which she attributed to the accessibility of the Winston-Salem First Assembly Church as a polling location. The data collected in the Old Gold & Black’s first-ever election poll aligns with Magjuka’s perspective: 53% of respondents voted early and 46.1% voted via mail. Only two respondents said they planned to vote in person on Election Day.

“I am so proud of Wake Forest students. Deacs Decide Fellows worked for months to create voter guides, toolkits, social media pieces, and other GOTV efforts. Students designed and implemented ‘March to the Polls,’ the first effort of its kind to mobilize students during the early voting period. This was truly a campus-wide effort, and I am excited to build on the success of this cycle,” Magjuka said.

“I think Wake [Forest] did a great job giving us several opportunities to get registered, be politically informed, and go out and vote. They made it easy and fun,” Oh said. “Except I think classes should’ve been cancelled on Election Day [and the] morning after.”

Senior Katie Sprague explained that she thought Wake Forest handled the election in a safe way, but took up trouble with the university’s rethoric emphasizing unity no matter who presides in the presidential election.

“I think that they said what was normally correct for them to say, but in an abnormal election it was not the right way,” Sprague said.