In the latest period adaptation, Director Ben Wheatley fails to bring a new perspective to the Alfred Hitchcock classic 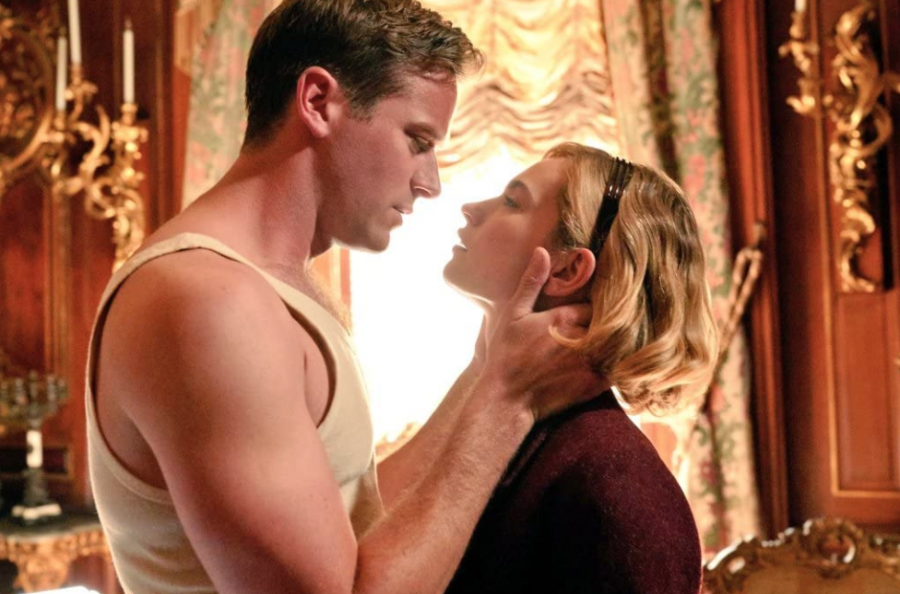 In the new Netflix film Rebecca, Lily James stars in the titular role with Armie Harmer playing opposite her. The film is the most recent adaptation of Daphne du Maurier's novel of the same name (Photo courtesy of imdb.com)

In a time of limited movie releases, every drop becomes exciting, especially the influx of new films by critically acclaimed directors made exclusively for streaming services. The most recent release of this type is Rebecca, a remake of Alfred Hitchcocks’s classic romance-thriller. Directed by emerging writer Ben Wheatley, the film follows the story of a young woman, played by Lily James, unnamed throughout the film as she marries and discovers the secrets of a wealthy English widower Maxim De Winter, played by Armie Hammer. The film begins with the woman serving as a ladies companion to the rich Mrs. Van Hopper, a woman portrayed as a crude archetype of an evil stepmother. The two check into a hotel in Monte Carlo, an exclusive vacation spot for high society and wealthy socialites, a point driven home when the unnamed woman is denied access to the hotel restaurant because she is “staff.” Thankfully, Maxim is there to save the day, inviting the clumsy and naive girl to sit at his table. Upon first meeting Maxim, he is dressed in a mustard yellow suit, which makes for a striking resemblance to “The Man With the Yellow Hat,” from Curious George. Unfortunately, this dreadful suit soon became the main focus of the film. Instead of finding myself locked into the story of the two lovebirds I found myself wondering, why is he wearing that? Did the costume team run out of budget? Who thought a tawdry and jaundiced stain colored suit would enhance Armie Hammer’s natural movie star looks? While it may sound like I am exaggerating, the suit may have been the most memorable part of the movie, a telling sign of how this review is going to go, but I digress. As obscenely long as the film was, the first twenty minutes were absolutely the most concise and momentous, leaving the rest to painstaking confusing storylines. In all honesty, it would take a whole research paper to unpack all the times I threw my hands in the air and yelled “What?!” at my computer screen, but I’ll stick with the most infuriating pieces. Buckle up.

Like a roller coaster taking off without warning, the film immediately dove into the action. Maxim and the unnamed woman began going on picturesque dates all over the coast of the Mediterranean. This could have been the romance we were looking for, but suddenly we see Maxim brings the woman to a beautiful terrace he reveals he stayed at with his dead wife on their honeymoon. Excuse me, what? Here is where I began to question how normal this character was, and why was the unnamed woman unperturbed by this? It seemed like every time I began to buy into the romance between these two, a random plot point or line ruined the mood. Instead of developing any real feeling between the two, they always felt like actors, attempting to feign attraction while both of them had better things to be doing. It didn’t help that the entirety of the meeting and romance between the protagonists lasted only the first twenty minutes of the film. We witness them kiss once or twice on their romantic dates until Mrs. Van Hopper decides to leave immediately with the unnamed woman for New York, knowing of her romance with Maxim. As the logical reaction of someone whose wife died six months ago and has only known his new lover for a few weeks, Maxim proposes. The overjoyed unnamed woman accepts, surpassing her class and receiving plenty of snide comments about it throughout the film, including from maids and butlers (side note: is this a movie about class system now?). Here’s where things really get confusing. What should have been the climax and resolution of the entire film occurs in the first twenty minutes, and it’s all downhill from there.

Bringing his new wife home to his great estate, which we learn was gifted from Henry VIII to the De Winters, Manderly is a dark and ancient manor with an off-putting feel of decrepit and fallen aristocracy. A huge team of butlers and maids greet the newlyweds outside, all of which look undernourished and dyspeptic, not a good sign for the new Mrs. De Winter (she finally has a name). The next 90 minutes of the film become a horror movie in a whiplashing move from sunny Monte Carlo to the depressing English countryside (why is it always cloudy there?). With the first villain of the film gone, a new one is swiftly introduced, Mrs. Danvers, the malicious housekeeper. Danvers plots against Mrs. De Winter, coming between her relationship with Maxim through conniving moves to bring up his dead ex-wife, Rebecca. Maxim refuses to tell Mrs. De Winter how Rebecca died or even to speak of her, a strange move for a supposedly happily married couple. The rest of the film centers around a murder mystery in which Mrs. De Winter attempts to learn how Rebecca died, an entire plot that could have been avoided if Maxim had simply told her. Without giving too much away, this plot becomes increasingly confusing with loose ends and unanswered questions running rampant throughout.

Apart from the jarring and constantly changing plot, my largest critique of this film may be in its portrayal of Mrs. De Winter, a woman never even given a name besides that of her husband’s. Throughout the whole film, she is walked all over by her mean-spirited boss, Mrs. Van Hopper, the cruel Mrs. Danvers, and particularly by her husband, Maxim. Maxim treats her more like a plaything than a real human being, seen in his tendency to never speak to her, not give her the respect of saying how her predecessor died, and maybe most infuriating, walking away anytime she asks him a question. The character of Mrs. De Winter is never given a clear identity or any development; she just takes the emotional abuse laid on her without complaining or ever standing up for herself. In an era of increased vigilance regarding the representation of strong women in media, this portrayal felt tone deaf and harmful. Overall, I would rate this movie a 2.5/10, as a two hour-long event, I felt mentally exhausted by the end and irritated by the one-dimensional characters. My advice? Don’t fix what isn’t broken. The original serves just fine.