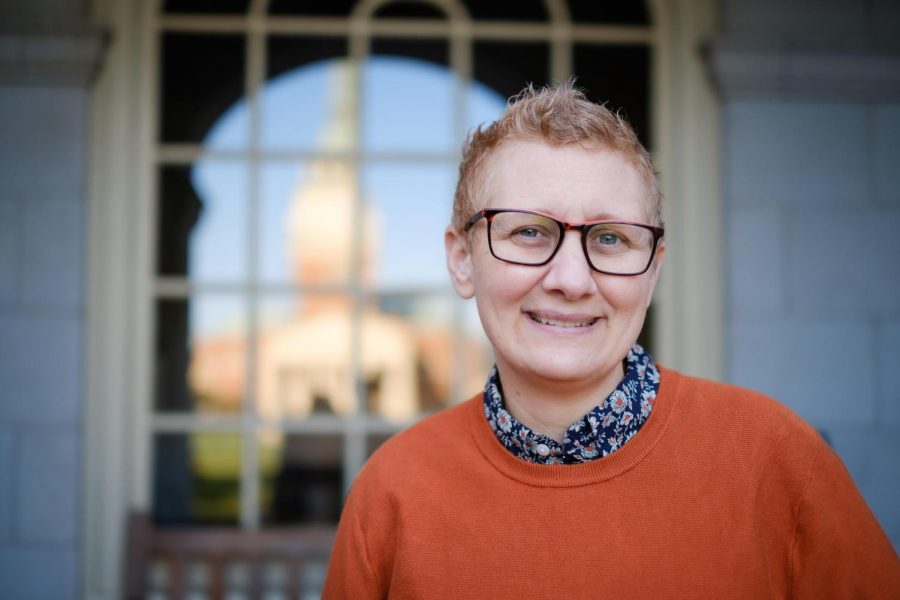 AJ Mazaris is the Founding Director of Wake Forest’s LGBTQ Center and the Assistant Vice President for Equitable Policy within the Office of Diversity and Inclusion (ODI). They also teach in the Department of Women’s, Gender and Sexuality Studies. Mazaris holds a PhD in American Studies from Brown University.

What led you to Wake Forest?

I came to Wake in 2011. I was hired to be the Founding Director of our LGBTQ Center. I had graduated a year before that with my PhD from Brown [University], and I’d taken a job right after graduation doing institutional diversity work at the federal level for the IRS. What I discovered was that it’s hard to do effective diversity, inclusion and equity work if you don’t understand and deeply resonate with the mission of the organization. I really didn’t know anything about what it took to make this huge agency responsible for administering our federal budget work, so I wasn’t very good at my job.

What I realized was that there was a type of institution that I knew really well and loved, and that is higher education. I desperately missed being at a college or university, so when I saw the announcement that Wake was hiring an inaugural director for their LGBTQ Center, I jumped at it. It felt like the right move for me and an amazing opportunity to be part of building something from the ground up.

What has been your favorite part of serving as the director of the LGBTQ Center?

I think one of my favorite things has been seeing the amazing structural and institutional changes Wake Forest has made over the past nine years. Things that just weren’t imaginable when I got here are now just part of how we do business. We have all-gender restrooms all across campus. We have a gender-neutral housing program. We have health insurance plans that have full coverage for trans-affirming care. We have a really robust LGBTQ center that didn’t exist nine years ago.

On a personal level, I think that my favorite part has been getting to have relationships with students. I see people come in as first years and grapple with the questions of, “How do I find my place at Wake? How do I make peace with this aspect of my identity?” and I get to walk alongside them as they figure those things out and then ultimately move out into the world.

How has the LGBTQ Center’s programming been affected by the pandemic?

If you’d asked me a year ago, “Is it possible to do all of the programming, community-building, support and advocacy you’re doing remotely?” I would’ve laughed and said absolutely not. But we [the LGBTQ Center staff] have adapted to the pandemic because we have to. We’re still offering almost all of the same programming that we were at this time last year. We still hold our identity spaces, which are important ways for people to build community around different aspects of their identity, whether that’s as first year students, as queer trans students of color or as trans and non-binary students. We’re still meeting with students, usually over Zoom and occasionally through outdoor meetings in person. We’ve done a few in-person events as well, which I think have been great. During Queer History Month, we did a mask tie-dyeing event, and we just did another event to give people a place to check in after the election.

A lot of what we’ve done we’ve taken online. Some of it has worked, some of it hasn’t, and we’re still trying to figure it out as we go. What we’re really trying to be intentional about doing is continuing to give students ways to connect.

What does your position as Assistant Vice President for Equitable Policy for the Office of Diversity and Inclusion entail?

What it entails is being available as a thought partner and consultant to our university leaders as we’re making policy decisions. We want to ensure that we’re building equity as a core value in our policies. So we’re asking, “will this policy or practice disproportionately impact one group of people? How do we make sure that everyone is benefitting from these changes?”

For example, I’m the co-chair of the ODI’s Committee on the Intersection of Incidents of Bias, Expression and Conduct. The committee was charged by President [Nathan] Hatch to examine the tensions between wanting an institution where free speech is one of our core values and recognizing that environments with no limits on what it’s acceptable to say can often cause harm to our marginalized community members. So I’m working with a committee of faculty, staff and students to evaluate our policies on expression. We’ll ultimately produce a report that makes recommendations to the Vice President for Campus Life.

How have you seen attitudes towards issues of diversity and inclusion change during your time at Wake Forest?

It’s been a pretty profound and monumental shift. When I got to campus in 2011, the LGBTQ Center was down in the basement of Benson in a space that had housed a student-led group, the Gay Straight Student Alliance. When I got there, one of the things that I did was keep the door open during the day so that people could find us and come in. I remember the students saying to me, “if you have the door open, people will be able to see who’s in here.” There was this sense of deep anxiety and fear. It’s been pretty amazing to see the shift over nine years, going from that to having a campus where our students are so proud of the LGBTQ Center space and their identities within it.

I also think that in the past nine years, I’ve seen the greater student body developing a sense of consciousness around what it means to advocate for equitable and inclusive spaces and work for justice across different identities. Watching our students articulate intersectional social justice and work to find ways to live that out has been amazing.