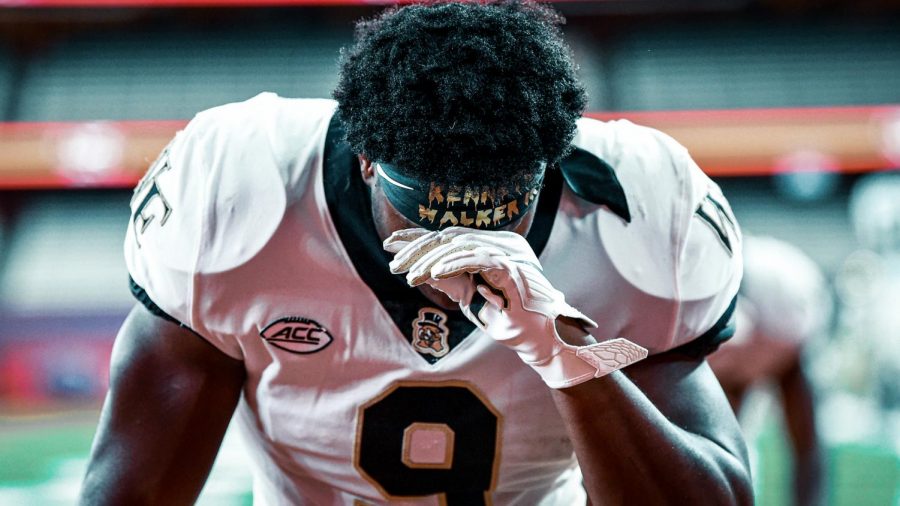 Walker (above) ranks No. 2 in the nation in rushing TDs (Photo courtesy of Wake Forest Football Twitter)

Summing Up the Deacs

Wake Forest (4-2, 3-2 ACC) comes out of the off-week with confidence, having just completed their first undefeated October since 2007. After a poor start to the season that included losses to Clemson and NC State, the Demon Deacons have turned a corner on their season and might be playing their best football in years. During their 4-0 stretch, Wake Forest downed three straight ACC opponents, including Virginia Tech, which was ranked No. 19 in the nation at the time.

Summing Up the Heels

North Carolina (5-2, 5-2 ACC) is one of the most challenging teams to judge in the ACC this year. There were very high hopes leading up to this season for the Tar Heels, who were looking to build on a 7-6 season that included breakout performances from fellow first years: Head Coach Mack Brown and quarterback Sam Howell. North Carolina began their season 3-0, with wins against Syracuse, Boston College and Virginia Tech, which vaulted them to a top-five ranking in the nation. Following that start, North Carolina has alternated wins and losses, defeating NC State and Duke, while disappointingly falling to Florida State and Virginia.

Players to Watch For Wake Forest

Kenneth Walker III has been the most dynamic player on the Wake Forest offense this year. He comes off a three-touchdown performance against Syracuse, his third hat-trick of the season. Walker currently has 11 rushing touchdowns on the season, which places him second in the ACC. That number also has him sixth in single-season rushing touchdowns in Wake Forest history. He only needs five more touchdowns to break the record.

Jaquarii Roberson also is coming off a big week against Syracuse, which was punctuated by Roberson’s game-changing 80-yard touchdown catch. The redshirt junior currently has 33 receptions for 490 yards and two touchdowns this season. Those are not the most impressive of the statistics attributed to Roberson, though, as he currently is the second-highest ranked wide receiver in the NCAA with a 91.1 grade from Pro Football Focus.

Boogie Basham is the most prolific defender for the Demon Deacons and one of the best in the ACC. The redshirt senior leads Wake Forest with five sacks, which ranks fifth in the ACC. Leading into the game against Syracuse, Basham held the longest active streak in the NCAA for consecutive games with a tackle for a loss, which ended against the Orange at 23. Basham was a consensus preseason second team All-American and is currently on the watch lists for both the Bednarik and Nagurski awards.

Relatively unknown coming into this season, the walk-on freshman has become a reliable starter for the Wake Forest defense and became a national story following his three-interception game against Virginia Tech. In the performance that earned him a scholarship for the remainder of his time in Winston-Salem, Andersen also became the first Demon Deacon to intercept three or more passes in a game since 1987.

Players to Watch for North Carolina

Sam Howell, a true sophomore, is recognized as one of the best quarterbacks in the ACC and one of the most promising in all of college football. He is currently second in the conference in passing yards with 2,081, only trailing Phil Jurkovic by two yards. Howell’s best performance of the season came against Florida State, where he threw for 374 yards and three touchdowns.

Javonte Williams immediately jumps off the page as a statistical mismatch that the Demon Deacons must watch out for on Saturday. He leads the ACC and the NCAA in total touchdowns with 17, 14 of which have come from the running game. The junior is also in third place in the ACC in rushing yards with 767.