With less than a week remaining until the ACC tournament, the Demon Deacons are on fire 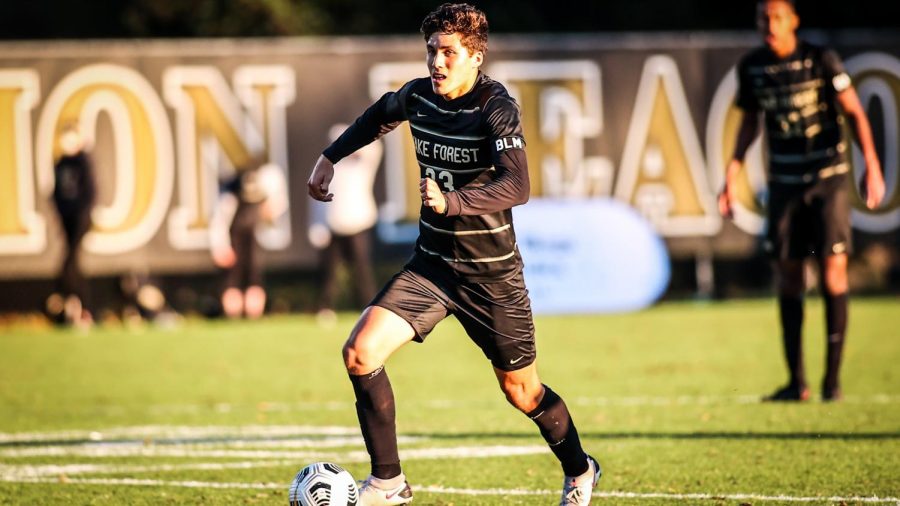 The Wake Forest Men’s Soccer team is peaking at just the right time. With the opening round of the ACC Tournament less than a week away, the Deacs are riding high into the postseason and coming off a four game winning streak. Their latest match, a 2-0 win over NC State, epitomized the skillful offense and the stifling defense that defines Wake Forest soccer.

Wake Forest was the heavy favorite coming into the matchup. The Deacs led the ACC South division with a record of 6-1-0, while NC State was still searching for their first win with a record of 0-5-1. This was Wake Forest and NC State’s second matchup of the season. The first game was a blow out, with Wake Forest dominating at Spry Stadium to win by a score of 4-1.

The second game between the two Tobacco Road rivals got off to a slower start with no shots on goal in the first 15 minutes of the match. But then in the 16th minute, Wake Forest junior midfielder Isaiah Parente broke through for his first goal of the season. The goal was set up by junior forward Kyle Holcomb’s brilliant dribbling abilities. Holcomb positioned himself on the edge of the defensive backline and timed his run toward the goal so he would just barely stay onside. He received an aerial cross from midfield and deftly controlled the ball as he sped past the defender. Holcomb was then in front of the charging NC State goalie and dribbled around him to the left. With three NC State defenders converging on Holcomb, who was now just a few feet away from the corner of the net, he passed the ball to a wide open Isaiah Parente in the middle of the box. Parente one-touched the ball and sent it sailing into the net. The goal put Wake Forest up by a score of 1-0.

Wake Forest had another great opportunity to score three minutes after their opening goal. In the 19th minute, an NC State foul in the box gave the Deacs a penalty kick. Kyle Holcomb took the shot, but the NC State goalie saved it to preserve the 1-0 score.

The Deacs went into halftime with a 1-0 lead. Notably, during a four minute stretch during the first half, NC State received threeyellow cards. It was a very chippy first half, with Wake Forest recording eight fouls and NC State recording 15 fouls.

NC State’s aggressiveness would come back to bite them in the second half. In the 69th minute NC State midfielder George Asomani received his second yellow card of the match, which gave the Deacs a man up advantage. Any hope of NC State squeezing out a point vanished with them playing a man down.

Wake Forest quickly took advantage of the opportunity and doubled their lead in the 74th minute. Senior forward Machop Chol was dribbling down the right side of the box and created separation from his defender. He then gave a high cross into the center of the box where Kyle Holcomb leaped up in the air and headed the ball past the keeper and into the net. The goal was Holcomb’s fifth of the season and the assist was Chol’s second of the season. The Deacs would finish the game with a 2-0 win.

The Wake Forest defense played exceptionally well and held NC State to only three shots the entire match. Overall the Deacs had a 14-3 advantage on shots and an 8-2 advantage on shots on goal. For his two saves and fourth clean sheet of the season, Wake Forest redshirt junior goalie Andrew Pannenberg was named the ACC Defensive player of the week.

Wake Forest’s next game is the ACC quarterfinal matchup against Virginia on Nov. 15, at Spry Stadium. The Deacs are the top seed in the south division while UVA is the fourth seed in the north division. Last season UVA knocked Wake Forest out of the semifinals of both the ACC Tournament and the NCAA Tournament. With their exceptionally strong play in recent weeks, the Deacs are primed to flip the script this season.