With a monumental win over Clemson, Notre Dame assumed No. 1 on the Week 11 AP Poll 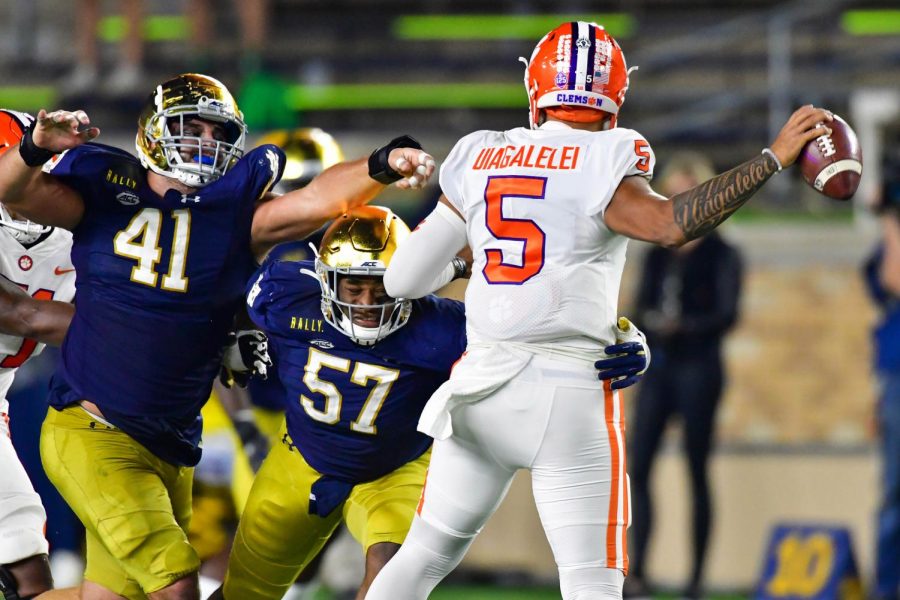 With the entrance of the MAC and the Pac-12, this past Saturday was the first to feature all 10 FBS conferences in action, but the headline moment of Week 10 had nothing to do with the new arrivals on the college football scene.

If you have not yet heard, the top-ranked Clemson Tigers fell in dramatic fashion to the fourth-ranked Notre Dame Fighting Irish 47-40 in the weekend’s premier showdown. The Tigers were without star quarterback Trevor Lawrence for the second-straight week due to a positive COVID-19 test, and for the third week in a row, the Tigers started a bit slow, trailing 23-10 in the second quarter. Freshman backup quarterback D.J. Uiagalelei passed for 439 yards, but star running back Travis Etienne only ran for 28 yards for Clemson, and a relentless 310-yard performance from Notre Dame quarterback Ian Book allowed Notre Dame to hang around and send the game into overtime tied 34-34.

Both teams scored in the first overtime, but some late sacks prevented the Tigers from answering the Irish’s score in the second overtime. With the win and their relatively light schedule for the rest of the year (until they march into Winston-Salem, of course), Notre Dame instantly becomes the favorite to make the ACC Championship Game, where they very well may meet Clemson again.

The Tigers dropped their first regular-season game since 2017 and now need to run the table and win the ACC if they hope to make the College Football Playoff.

The other big game of the weekend saw eighth-ranked Florida take down fifth-ranked Georgia in the World’s Largest Canceled Cocktail Party. Georgia led 14-0 early in the first quarter, but the rest of the first half saw Florida’s explosive offense take center stage as the Gators’ Heisman-hopeful quarterback, Kyle Trask, torched the top-rated defense in college football en route to a 38-21 lead for the Gators. Muted second-half performances by both offenses did not change much, and the Gators kept their Playoff hopes alive while taking the driver’s seat in the SEC East.

In Bloomington, the No. 13 ranked Indiana Hoosiers validated their ascendence with a comfortable 38-21 victory over Michigan, simultaneously confirming the Wolverines’ spiral from what they looked like in their opening-game victory over Minnesota. Michigan could not field many game-changers besides an inconsistent-but-talented quarterback in Joe Milton, and Indiana’s offense looked strong against a Michigan defense featuring plenty of highly-rated recruits.

The first game of the Pac-12 season was also the first thriller, in a sense. Perhaps thanks to a 9 a.m. local start time, neither Arizona State nor No. 20 USC was explosive out the gate, but the Sun Devils managed to take a 27-14 lead deep into the fourth quarter before a touchdown-onside-kick-touchdown sequence at the very end by the Trojans flipped the script and won the game 28-27 for USC. The win was monumental in maintaining the Trojans’ status as favorites to win the wide-open Pac-12 South, but Arizona State’s performance solidifies their place among the conference’s contenders, and the Sun Devils could still win their division if USC manages to stumble a few times later this season.

Another surprise of the week was the  No. 25 ranked Liberty Flames triumphing over heavily-favored Virginia Tech, 38-35. The Hokies may have been preparing for next week’s showdown against Miami a bit too early and forgot to prepare for a creative and balanced Liberty offense that was able to capitalize. The Flames hung around for the entire contest and controlled the game late before kicking a 51-yard field goal to win it as time expired. Bizarrely, the kick was originally blocked and returned for a Virginia Tech touchdown to win, but the Hokies had called timeout just seconds before the snap, giving the Flames another chance.

The college football season has finally hit full stride, and Clemson’s demise this week shows that no one is safe from the chaos of the sport. Especially after that game, the questions surrounding who makes the College Football Playoff have gotten even louder. The Playoff Committee will need to balance teams’ records with postponements and sit-outs caused by the virus, as well as varying lengths of schedules across conferences. The only way to learn who will take a spot is to watch as the schedule becomes more intense.