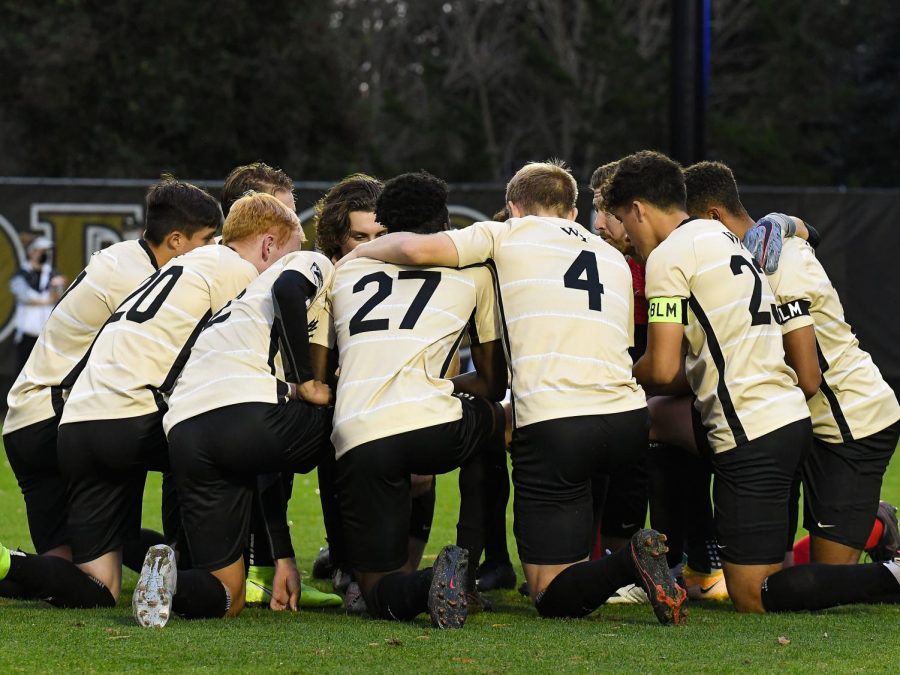 With multiple key players sidelined due to COVID-19 and contact tracing, the squad was short-handed in their loss to UVA in the ACC Tournament (Photo courtesy of @WakeMSoccer/Twitter)

It was a bizarre way to end a bizarre year. After rolling through the regular season with a 7-1 record, an 18-to-5 advantage in goals scored — good enough for the top seed in the ACC South division — the Wake Forest Men’s Soccer team was one of the favorites to win the ACC Tournament. But then, going into the quarterfinal matchup against the University of Virginia, a combination of previous injuries, positive COVID-19 tests and contact tracing left the Deacs without four of their starters and 11 total players on the roster. With a shorthanded squad, Wake Forest lost by a score of 2-0, the defeat ending their fall season.

The Deacs were missing their leading goalscorer, junior Kyle Holcomb (who has five this year) and senior Machop Chol, who has the third-most goals on the team with three. Additionally, Wake Forest was missing junior Isaiah Parente, who has four assists this year. On the defensive side, Wake Forest was missing standout freshman defenders Garrison Tubbs and Cristian Escribano, who have each made multiple starts on the season. In total, each of these absences left Wake Forest with just four position players on the bench during the match.

The first half began with Wake Forest getting off to an aggressive start, taking three shots in the first 10 minutes, but none of them were on goal. The Wake Forest goalie and redshirt junior Andrew Pannenberg had a few nice saves early in the first half to help keep the match scoreless. UVA broke through in the 31st minute with a goal by junior forward, Cabrel Happi Kamseu. By the end of the first half, UVA had a 1-0 lead, but it was a fairly even 45 minutes, with UVA taking seven shots and Wake Forest taking five.

UVA quickly expanded upon their lead early in the second half by capitalizing off a miscue from Wake Forest. In the 52nd minute, a Wake Forest defender had the ball and passed back to Pannenberg to reset the play. But UVA’s Kamseu intercepted the pass and, in a one-on-one situation with the goalie, chipped the ball over his head for the goal. With a 2-0 lead and Wake Forest missing much of its offensive firepower, UVA was able to play more defensively and hold on for the 2-0 win.

At the end of the game, UVA only held an 11-10 advantage on shots taken, but they had more quality chances to get  seven of their shots on goal, while Wake Forest only had two shots on goal. Additionally, UVA controlled 55% of the possession, making this game one of the few times over the past few years in which Wake Forest was not able to control the majority of possession. Pannenberg ended the match with five saves as well. Additionally, UVA was much more aggressive and picked up four yellow cards in the match while the Deacs picked up none. This was the third straight postseason in which UVA has knocked Wake Forest out, including last year’s ACC and NCAA tournaments.

Although the fall season did not end the way the Deacs wanted, there were still many bright spots. Even after the loss, Wake Forest only dropped one spot, to third, in the national rankings, which shows that voters understood this was not the same Wake Forest team that had been playing all season. The Deacs have a strong cast of experienced veterans, like forward Chol and goalie Pannenberg, who are paired with young talents like sophomore forward Calvin Harris and defender Tubbs. Entering the NCAA Tournament in the spring, the Deacs will be one of the leading favorites, and if they can avoid another unlucky COVID-19 situation, there’s no reason they can’t win it all.