Senior Rhythm Badal has created a collaborative playlist for students to add to, as part of a project for her Public Arts class 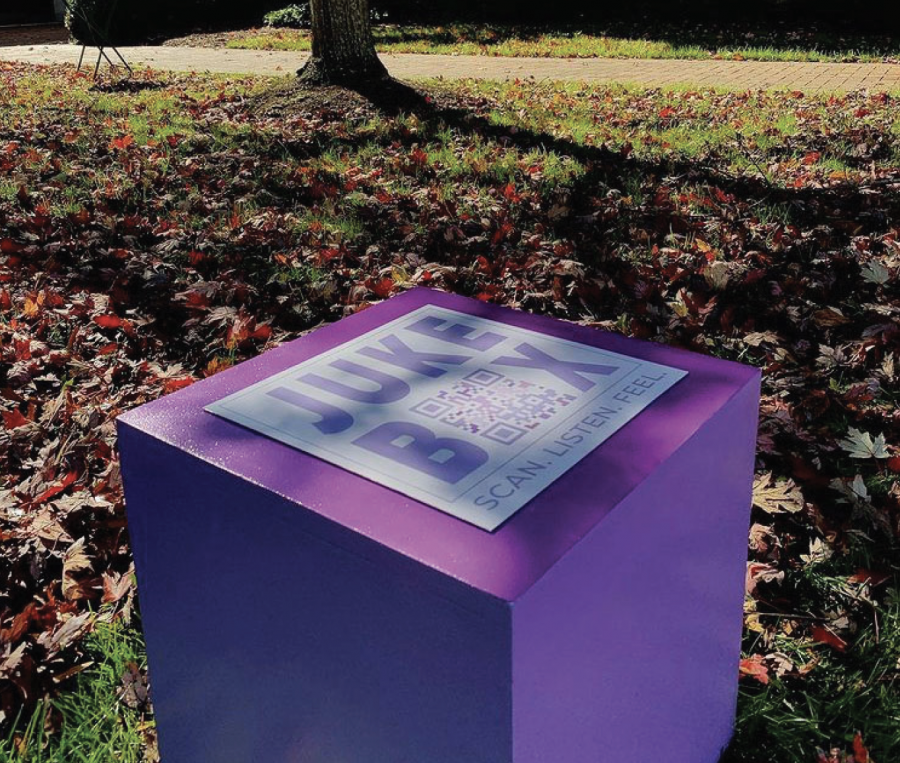 Students can scan the QR code on top of each box placed strategically around Hearn Plaza to add songs to and listen to the playlist. Follow the project on Instagram to stay up to date with new additions (Photo courtesy of @jukebox_therapy_ on Instagram)

Any avid reader of Vice-President Penny Rue’s weekly COVID-19 emails knows that the color purple is not a pleasant sight on campus. So students may have been alarmed when they came across three purple wooden boxes placed around campus a few weeks ago. Jukebox Therapy is not a cause of worry and in fact, is an attempt to assuage any worries that passersby may have.

Placed outside Benson University Center, Reynolda Hall and Farrell Hall, theses boxes have a QR code which sends whoever scans it to jukebox-therapy.com, a collaborative playlist created for the Wake Forest community, by the Wake Forest Community.

“I wanted to do something that was COVID friendly, that people could interact with but have it mostly be on a digital platform so I decided to work with QR codes. Music just kind of came to me one day when I was listening to music, I was like ‘wow music really has this ability to change your emotion, how you feel and also connect you with others,’” said senior Rhythm Badal who created Jukebox Therapy.

Badal installed the virtual jukeboxes for her Public Arts Course taught by Professor David Finn in which the entire semester has culminated into this project. Badal was inspired by the Digital Nomad Project, a series of QR codes scattered throughout various cities that give users location-specific information, and wanted to bring this idea to campus as a way to unite and connect Wake Forest students, faculty and staff during these emotionally-draining and anxiety-inducing times.

The Jukebox Therapy playlist, which Badal updates nightly, has over three hours of music submitted by the Wake Forest community. The playlist is entirely of the hip/hop genre and this is by design. One of Badal’s collaborators, Dr. Donovan Livingston, teaches a course entitled “Issues and Trends in Education: Hip-hop Pedagogy, Poetics and Remixes for Higher Education” and intially lead Badal towards the idea of a hip/hop oriented playlist.

“After I started thinking about it, hip/hop is a really good genre of music because it provides a platform for people who might not be heard, usually in marganilized communities, to speak and voice their concerns. A lot of the content is political or about social justice so I thought it was a good genre for right now during this time. I think it also has a lot of emotion in it; it can be sad or angry or it can be self-empowering. It’s a genre that can melt it all in together,” Badal said.

Users suggest songs by typing “‘Song Title’ by Artist” into the jukebox screen and then have the option of explaining why they chose this specific song. Badal said that she was on the fence for adding “Boss Bitch” by Doja Cat because she felt it was more resemblant of the pop genre rather than hip/hop. However the submission’s explanation of their decision swayed Badal to include the song about female-empowerment.

“If the song reflects empowering certain people who might not be heard or just in an effort to connect, speak about people who dont get to speak usually, I will try to include it,” Badal said.

The project is going smoothly now, as word has spread throughout campus and the internet, specifically through Badal’s instagram for the project, @ jukebox_therapy_, but the lack of interaction the first few days concerned Badal.

“I didn’t realize that you have to buy QR codes, I thought that once you got them they would just work. So I had rented it for 30 days, and I didn’t realize this, but the day I put it up, [the code] expired. So that weekend I wasn’t receiving any submissions so I was really worried about it. I was like ‘no one likes it’. Then I looked at my spam mail and found out the QR code expired and had about 60 people try to scan it and not be able to get onto the playlist,” Badal said.

The issue was resolved with a $5.00 transaction and notices were placed around the boxes saying that the code now works and submissions are welcomed.

Badal plans on keeping the installation in place for as long as possible, citing the deteriorating wood as the only obstacle.

“I would like to have it be, and so would [Livingston] and Christina [Soriano, another collaborator], and they both want it to be a permanent installation but each year it will be a new playlist. So this will be the 2020 edition, and I guess I would start over next semster and that would be the 2021 edition,” Badal said.

After graduation this May, Badal hopes to expand this project into the city of Winston-Salem, hoping to organize community-created playlists that are more site specific rather than genre. She hopes to keep the overall theme of connection and unity strong moving forward,

“It’s just about listening to music, being able to connect with how youre feeling, how youre feeling in a certain space, looking at how others are feeling and then being a part of something that is collaborative in a sense,” she said.