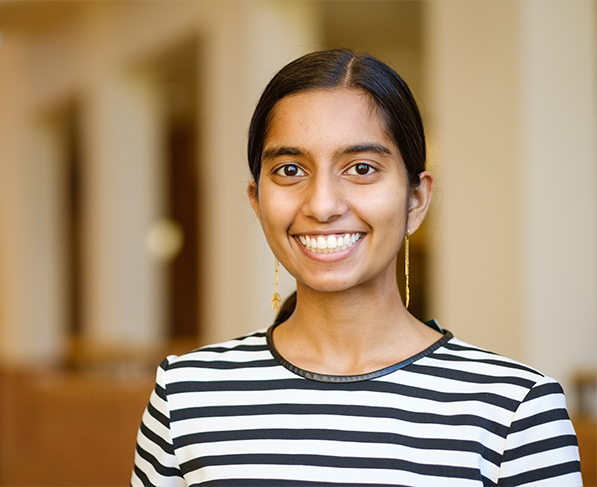 When senior Savarni Sanka started writing her Rhodes Scholarship application in August, the process ahead appeared long and arduous. Four months later on Nov. 21, when she was announced as Wake Forest’s 14th Rhodes Scholar since 1986, her feelings of trepidation were replaced with excitement, accomplishment and more than anything, gratitude.

Sanka describes her path to the scholarship as a long journey — a group effort involving a grueling application process, rigorous introspection and her own drive, fueled by a desire to make a tangible difference.

The scholarship will provide Sanka with full financial support towards a degree of her choosing at the University of Oxford, along with leadership development programming and professional opportunities.

Sanka plans to pursue a Master’s of Public Policy and a Master’s in Refugee and Forced Migration Studies. Her courses of study will fit into her desire to implement systemic change to benefit migrants and refugees.

“I’ve been involved with migrant communities for a really long time. My parents are immigrants. I studied Spanish and had a lot of opportunities to get to know in my high school Hispanic migrants, immigrants and refugees. Through my Arabic studies I gained an interest in immigrant populations and making sure that they aren’t marginalized, that their voices are heard and that they can thrive wherever they are,” Sanka said.

Sanka is the 14th Wake Forest student since 1986 to win the award, which is the oldest and one of the most prestigious international fellowships in the world. Created in 1902, the scholarship annually selects 32 young students across the U.S. for their outstanding scholarly achievements and demonstrated leadership potential.

The application requirements included eight letters of recommendation, a daunting task. But the process allowed Sanka to reflect on her personal goals before she begins her study at Oxford in October of 2021.

“[Applying is] a beneficial process in a lot of ways,” Sanka said. “It forces you to sit and reflect on yourself, your goals and your experiences, where you are now, where you’ve been and what’s next for you. It’s how Oxford might fit into that but more importantly, what impact you want to make on the world.”

Sanka is studying Politics and International Affairs and has a minor in Middle East and South Asia studies. At Wake Forest, she expanded her passion for refugee and forced migration studies through the Student Association for the Advancement of Refugees. She said that experience allowed her to break out of the Wake Forest bubble.

“It’s so important to understand that we, as in everyone, are responsible for creating a world where everyone can thrive,” she said. “When you see that you can find ways to support people in empowering themselves — support people who society has tried to disempower — and learn from them is really exciting.”

Emphasizing that her journey to the scholarship had been a long one, Sanka expressed gratitude for her mentors throughout the years.

“I’m so, so grateful to all of my teachers and mentors from youth until now, and anyone who’s supported me along this journey. Like Jackie Sheridan, she’s the director of [the Scholars Program] here at Wake [Forest], and her and I were joking that it’s been a really big group effort for many years,” she said.

Sanka worked closely with Sheridan on her application.

“[The Rhodes scholarship] also provides students with some leadership development, some additional professional development, and the cohort itself, as well as plugging them into an awesome network of alumni,” Sheridan said.

Of Sanka, Sheridan added, “she’s an all-around good person. When she talks about the things that she does, she just speaks about the people [with whom] she works with such heart. It’s clear she was not applying to the Rhodes [scholarship] just to add another achievement to her resume but because she hopes she can do good with it.”

As Sanka shifts her attention to her graduate studies, she leaves behind an accomplished legacy at Wake Forest.

“What I have been impressed with most is her will to use her gifts, not through arrogance but through humility,” said Tom Phillips, former Director of the Wake Forest Scholars Program and another mentor. “If the Rhodes Scholarship is awarded to those who most deserve the honor and the opportunity, that is Savarni.”