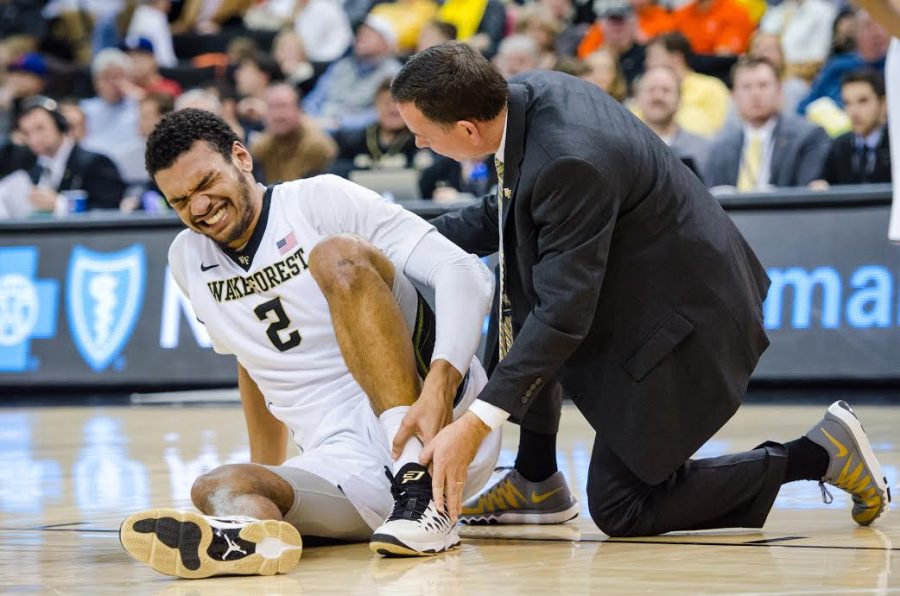 Devastating. Heartbreaking. Disastrous. Season-shattering. Tear-jerking. All of these words come to mind when thinking of the Wake Forest men’s basketball team’s loss on Tuesday night to the 11th ranked Virginia Cavaliers. Yet there are no words that can truly explain or describe what occurred on that night.

The Cavaliers won the game and led for a total of 45 seconds. The Demon Deacons played their best game of the season for 39 minutes, and led the Cavaliers by seven-points with 20 seconds remaining in the game.

Punctuated by a vicious Devin Thomas dunk over a defender with less than a minute remaining, the Deacons looked well on their way to pulling off their biggest win of the season.

Students had begun funneling towards the court, and ropes were being put up to protect the visiting bench from being overrun when the Wake Forest students inevitably stormed the court. Unfortunately, that court storming never came to fruition, as the Deacs missed free throw after free throw in the waning seconds and allowed the Cavaliers to bank in a three-pointer at the buzzer.

Wake Forest dominated every aspect of the game and countered every run the Cavaliers made, and at the end of the day it still somehow wasn’t enough to win. It’s easy to blame coaching decisions, poor defense, or horrific free throwing shooting for the epic collapse, and all of these would be valid claims, but when a player who hasn’t made a three-point shot in over a month makes a wild, one-handed shot at the buzzer to cap an impossible rally there really isn’t anywhere to point a finger.

Wake Forest suffered what was likely the most gut-wrenching loss of this basketball season, and perhaps the biggest tragedy to come from the loss was that no one is going to remember how well the team played.

Wake Forest played its best defense of the year, hustled on every play and dominated one of the best teams in the country. Virginia coach Tony Bennett, who said after the game that “Wake Forest really outplayed us,” seemed resigned to the fact that Wake Forest was going to win the game.

This game is going to be nearly impossible for the players to forget, and with an NCAA tournament berth seeming less likely by the day, the way this team plays down the stretch of the season will show fans a lot about the grit and determination of this team.

A road trip to Notre Dame is not going to be an easy game, in fact it will likely be a loss, but this team has proven they can play with anyone when they play at the top of their game.

Unfortunately for the Deacs, Virginia was not the only close loss to a top ranked team this past week. The scheduling gods (read: ACC officials) have not been kind to WakeForest this season.

After coming off games against Syracuse and North Carolina, the Deacons were faced with traveling to the University of Miami on Saturday, followed by the aforementioned visit from the Virginia Cavaliers. Miami has been playing great basketball as of late, and as a result is currently ranked number 15 in the country. The Hurricanes defeated the Duke Blue Devils emphatically on Monday night.

The Deacs, once again, fought valiantly and had the Hurricanes on the ropes when they tied the game at 48, with under ten minutes remaining.

Unfortunately, the Deacs failed to close out a close game down the stretch against a better team, a precursor to what would occur against Virginia.

This has been a recurring trend this season as the Deacs have played teams such as Duke, Louisville and Xavier extremely tight, but ultimately failed to come up with the shots they needed to win the games.

Often, these game defining shots have come in the form of free throws, one of the most fundamental aspects of the game of basketball.

Understandably, the level of difficulty increases as the pressure of the game rises, but one can only imagine what his teams record would be if they were able to consistently make free throws down the stretch of games.

Based on the lack of free throw consistency, it would be easy to blame the team for these tight losses and not finishing out these games; however, great teams are supposed to beat average to good teams.

Right now the Deacs are an average team, great on some nights, bad on others.

If the Deacs were failing to close out games against inferior opponents, then there would have to be serious concerns about the trajectory of this team; however, there is no shame in losing close games to great opponents.

In order to get over the hump both this year and moving forward, the team needs to beat one of these superior teams.

It appeared the Deacs were going to finally fulfill this goal in the Virginia game, but the ball did not bounce the right way.

Playing in the ACC provides an excellent opportunity for quality and program resurrecting wins, and hopefully this team will be able to get one.