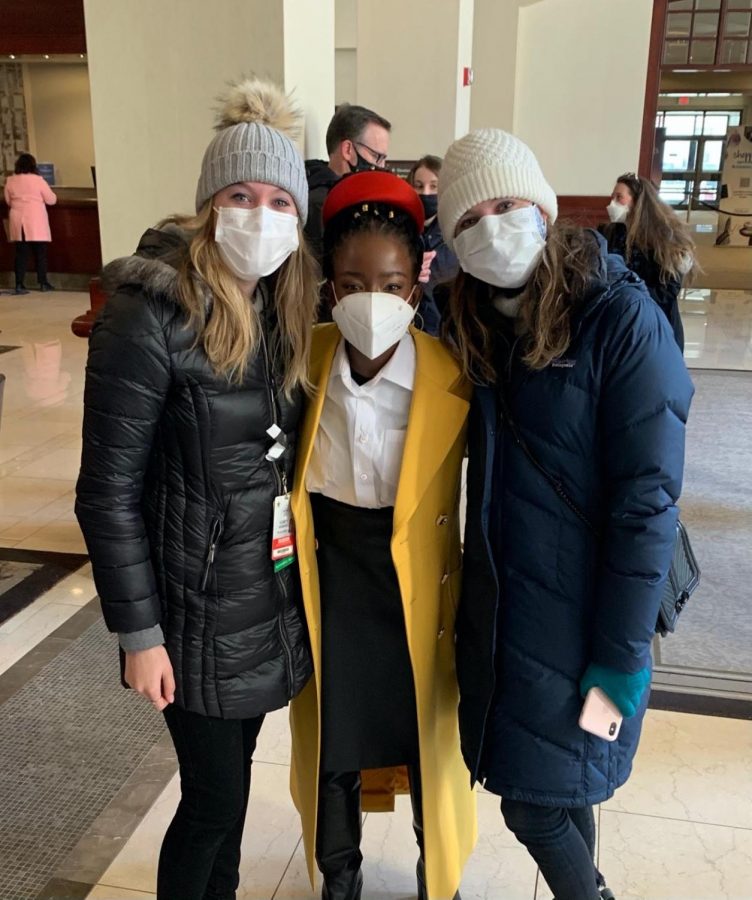 McMahon and her sister pose with inaugural poet Amanda Gorman, who captivated the nation with her poem “The Hill We Climb.”

Themes of unity and democracy echoed across the National Mall on Jan. 20 during President Biden’s inaugural address in a speech not heard by eager spectators, as it usually is, but instead by the 25,000 National Guardsmen stationed at the Capitol.

Throughout the inaugural proceedings, members of the Guard clad with semi-automatic weapons patrolled the Capitol grounds. Security checkpoints were scattered across the city and military tanks roamed the streets. These security measures established a firm perimeter around the heart of Washington, D.C. in a moment of heightened political tension.

This was a side of the inauguration seldom shown on television during the actual event, but one that weighed firmly on those in attendance, including myself, as I served as a volunteer. Attendees of the inauguration were constantly reminded of a looming threat over this historic event, which was often flashing with the red and blue lights of police sirens.

Exactly two weeks prior, an armed mob of Americans stormed the Capitol to disrupt the certification of then President-elect Joe Biden’s electoral win. Extremists were rumored to be planning a similar attack, yet the event remained peaceful.

Shielded by bulletproof glass, Joe Biden was sworn in as the 46th president of the United States without disruption on a cold January day. By his side was newly sworn-in Vice President Kamala Harris, the first woman to ever occupy the office.

The inauguration of President Biden fell not only during a moment of heightened political tension, but also during a time of unprecedented spread of COVID-19. Across the country, new variants of the COVID-19 virus continue to afflict the nation as vaccines slowly reach the public.

To ensure proper social distancing, the inauguration was only attended by a select number of congresspeople and notable guests. Former President Donald Trump, however, was not in attendance. The crowd of spectators usually found on the National Mall was replaced by nearly 200,000 state flags, each representing some of the 430,000 Americans who have died from COVID-19 since March.

As one of the few volunteers at the event, I stood on the National Mall with an N95 mask cutting deeply into my face — the same mask healthcare workers had struggled to acquire only months prior and a constant reminder of the issues already facing a new administration.

The speeches during the inauguration, however, offered a sense of hope to a large audience watching from home — about 40 million according to the New York Times.

The crowd at the inauguration seemed to calm when President Biden began his inaugural address. My fellow volunteers listened quietly to the president’s words as a new administration began, and with it a new era in D.C. Watching from home, many Wake Forest students shared this sentiment.

“Biden’s speech was very focused on the theme of unity, which I thought was nice to hear after everything that has happened this year,” senior Taylor Rowland said.

This theme of unity was also touched on by inaugural poet Amanda Gorman. In front of the nation, Gorman painted a future in which unity transcends division and discord. Gorman, hailing from Los Angeles, also earned the title of the youngest Poet Laureate to ever speak at a presidential inauguration.

One moment that particularly stood out to Wake Forest students watching from home was the inauguration of Vice President Kamala Harris, who was sworn in by Supreme Court Justice Sonia Sotomayor.

“Watching Kamala Harris’ inauguration was very empowering,” senior Lizzy Herbst said. “Since she’s the first Black woman and also the first woman of South Asian descent to be vice president, I can imagine girls watching and thinking ‘oh, I can do this because I see someone that looks like me doing this.’”

The inauguration ended in the evening with a fireworks display over the National Mall and remarks from the newly inaugurated President Biden and Vice President Harris. Later that night, the newly-elected administration signed 17 executive orders and actions, stagnating some of former President Trump’s initiatives while in office.

“Watching the inauguration made me feel excited for the next four years,” junior Angie Intriere said. “I’m hoping there will be a change in direction in Washington.”