As COVID-19 cases rise around the country, students return to campus under Orange status 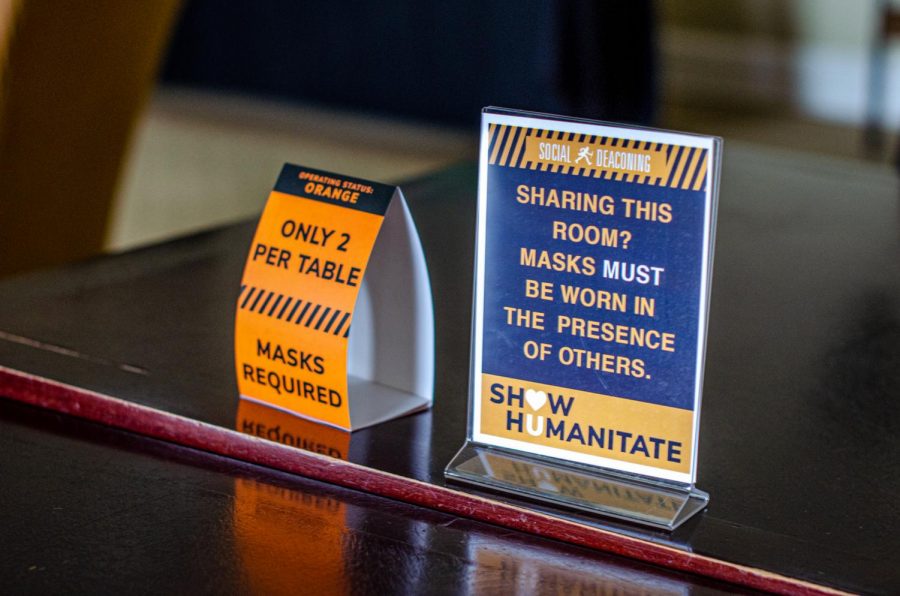 The university foresees its social distancing and mask requirements lasting at least until herd immunity is reached through vaccination.

Students returned to Winston-Salem this week after an unprecedented two-month winter break in which COVID-19 cases across the United States skyrocketed. In the last weeks of break, a new, deadlier strand of the virus was detected in the U.S.

University officials, however, were cheered by a number of factors that indicated relative COVID-19 safety in Forsyth County and the student population.

“We kept our eyes on [the public health situation] and had several go or no-go dates that we considered. Some of the things we looked at most carefully were the falling prevalence of COVID-19 in Forsyth County and the fact that our hospital was not stressed at all,” said Vice President for Campus Life Penny Rue. “We also looked at the percent positive in the asymptomatic testing of the students coming in the door, all of which were good indicators.”

The new semester, which will be the university’s third under the shadow of the pandemic, brings new changes, most notably to the quarantine policy. Now, those who test positive for the virus or who have contact with someone who tested positive will need to quarantine at the Best Western, regardless of whether they live on-campus or off-campus in Winston-Salem.

The decision, per Rue, was one the senior leadership team wrestled with for hours. However, the university was primarily concerned with high rates of transmission off-campus and the difficulty of transitioning without university support in providing meals, check-ins and activities.

“We had a group that we worked with all [fall] semester called the Data Review Committee, and that committee is made up of a really top-flight statistician … the head of the Data Analytics Program in the Business School … our director of institutional research … [and] our head of data visualization,” Rue said. “One thing that really stood out to us was that 50% of the cases came from the 25% of students who were living off-campus.”

The committee was also concerned about what Rue calls “serial transmission” in off-campus students.

“One house member would have [COVID-19] and then the other three would be in quarantine and think they were doing great, but then the second person would have it, so now the quarantine clock starts over. You might end up in quarantine for something like six weeks,” Rue said.

There is one restriction, however, that will be lightened this semester. Students who are asymptomatic will only need to quarantine for 10 days instead of 14.

Another change for the spring 2021 semester is North Carolina’s 10 p.m. curfew, which has been in effect since mid-December. Though food service and study spaces will remain available after curfew, in-person social gatherings will be prohibited. North Carolina Governor Roy Cooper extended the curfew Wednesday until Feb. 28 alongside other Phase 3 restrictions.

Even though vaccine distribution has begun and some students will be able to receive shots by the end of the semester, Rue and the administration do not plan to lift social distancing requirements until herd immunity is reached.

“What they say about the vaccine is it does protect you from getting the disease, particularly a serious form of the disease, and it does not prevent you from transmitting it, so we will still be expecting folks to wear masks and follow protocol,” Rue said.

Further, the university will not be requiring students to receive the vaccine, as the administration views mandating a vaccine that has only been approved for emergency use as unethical. When the COVID-19 vaccine is fully cleared by the Food and Drug Administration, though, Wake Forest students will likely be required to receive it.

Differing from last semester’s opening in Yellow, the university opened under Orange status, which places more restrictions on gathering sizes and meal spaces.

“We knew we were bringing students back from all sorts of different places and we also know that the state is pretty strict right now … so we thought it would be a major disappointment to open in Yellow and have to go back to Orange within a week if we had a spike, whereas it would be great excitement if our numbers stay low and we can go back to Yellow,” Rue said. A move back to Yellow status, however, would also depend on statewide restrictions.

As of Wednesday evening, the university has had 41 confirmed COVID-19 cases since Jan. 1, 21 of which are still active.