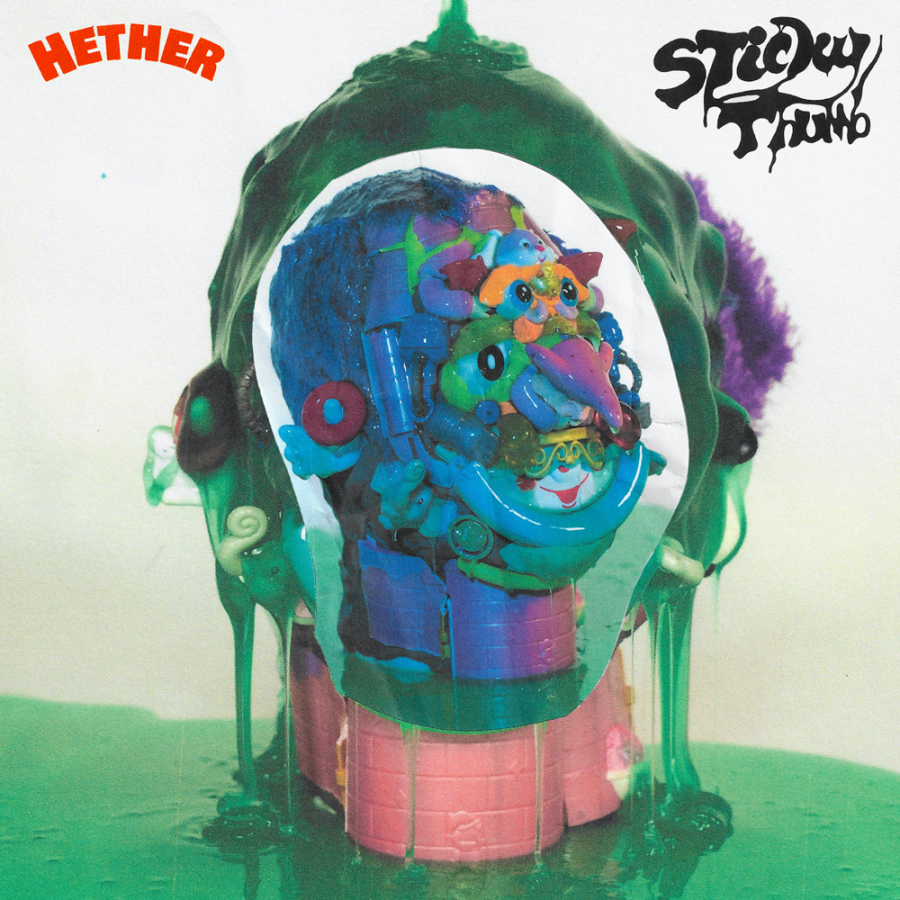 Paul Castelluzzo, through his solo project Hether, has recently released a new EP entitled Sticky Thumb. Though the album title nods to a sensation of isolation and drug-induced stupor, it is also an expression of increased self reflection. The hazy edges around Castelluzo’s riffs make his music a living thing, something to reckon with. Don’t be fooled by the easy going sound, the composition of this music is capable of drawing out emotional revelation. The beachy surf rock of “Sex Wax” and “Sticky Thumb” elevates the album, an energy that just as quickly rebrands itself as vulnerability.

“Sex Wax” is a song about a sandy summer fling intermingling the smell of surfboard wax with the sensation of a relationship slipping away. It is an interesting exercise in metaphor, as it expresses in a few words the concept of a scent connecting memory to the present — it’s as if this spontaneous outpour of feeling was prompted by walking past a surf shop with its doors open. The wet reverb and alternating picking of the guitar also creates an immediate connection to the past with such obvious nods to 60s surf rock. Here it becomes apparent that we are witnessing a personal history of sorts. One that both aurally and olfactorily connects his current state of existence to a past no longer existing. One that filled his ears with surf rock, freshly waxed surfboards, and easy love. For a moment we can be there with him, as he departs from a current reality and more subtly interfuses with the past. But this may only be for a moment, as the song ends with him saying the word “faded” repeatedly, as if the sunset dipping beneath the western horizon has finally gone and the sky once brilliant with color has turned twilight.

It is in this twilight that the vulnerability of “Twinkle” is illuminated. No longer living in the past, we now must interact with what is real. Castelluzzo, “tortured by the echoes of wondering,” expresses the sense of letting go that love so requires. “Twinkle” is the agony of waiting to see if the other person loves you the way you love them — the hope followed by swift and ruthless resignation. The chords bring about a sensation of being pulled in two different directions; it is a feeling of bliss and utter despair at once. To describe this world in terms of twilight seems particularly fitting. It’s dark everywhere and yet you can see still shadows illuminated, you can see outlines where things once stood whole. This is the feeling that “Twinkle” elicits, it’s a quickening darkness, and it stands as a main tension from the happy recount that is “Sex Wax.”

This tension I’ve attempted to point out, the sunny image of the past versus the shadowed present, is certainly a major component of Sticky Thumb. But one song particularly reveals a sense of purpose in drawing out this tension. Near the end of the album, Castelluzzo covers The Misfits “Hybrid Moments” in “Highbrid.” But I believe such a cover also shows a veneration for Duster, a predecessor of the band Helvetia who also performed a cover of this song. These bands I feel share a kindred sonic impulse, the likes of which DIIV and Snail Mail also attach themselves to.

An ethos thus arises. As music is stretched out, it reveals an elasticity, one of both time and space. To express admiration for Duster, a band whose late 90s albums fell into obscurity until the rise of streaming platforms, is to acknowledge time as an irrelevant marker of feeling. As this album shows us, powerful emotion can be felt from both our past and present, and thus the album becomes imbued with a poetic timelessness. Feeling may be fleeting, but to fossilize it into music makes it capable of remaining forever. That isn’t to say I find Hether’s music to be particularly important or canonical, but it is an acknowledgment that time creates an objectivity. In the same way we look back and view Duster as a band we are glad was saved from disappearing in time, Hether creates music that saves feelings that may have otherwise fallen to the same fate.