Women’s basketball goes 1-1 on the week 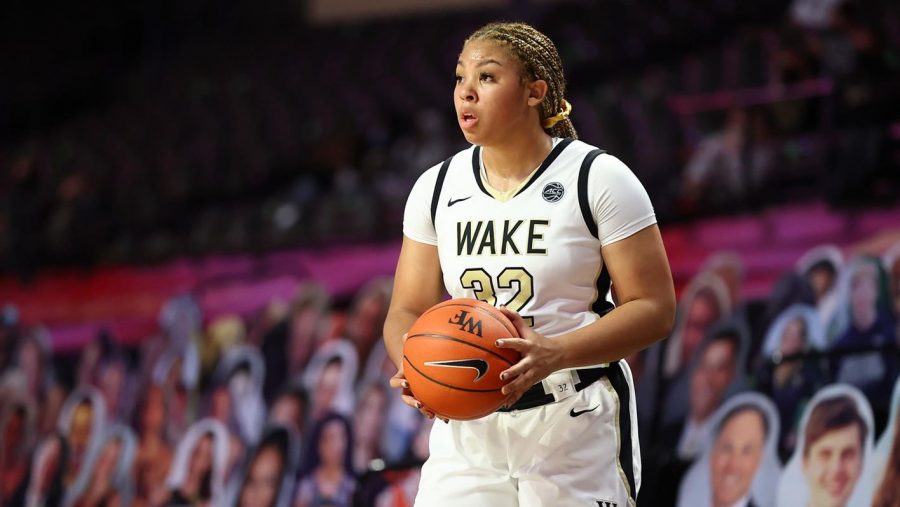 Led by a strong defensive performance, the Demon Deacons played some of their best basketball of the season on Thursday, Jan. 28, at home in the Lawrence Joel Veterans Memorial Coliseum, defeating Florida State 73-59. This was the first victory against the Seminoles for the women’s team since 2014.

Wake Forest owned the boards for the majority of the game, led by senior Ivana Raca, junior Christina Morra and sophomore Alexandria Scruggs, who each grabbed six rebounds. In total, the Demon Deacons outrebounded Florida State 39-28.

Before the game, Head Coach Jen Hoover stressed the importance of rebounding to her team.

“I told them in the pregame you have to win your individual battles on the boards so we can win the war,” Hoover said.

The first quarter was highlighted by a hot start for both Raca and freshman Jewel Spear, who combined for the Demon Deacons’ first nine points. After starting 4-6 from the floor, Wake Forest missed their next three shots. A Raca two was able to break the Demon Deacons’ cold streak, and a three from sophomore Olivia Summiel with nine seconds remaining gave Wake Forest a comfortable 17-11 lead at the end of the first stanza.

Wake Forest began their second quarter with shaky offensive play, but were able to maintain the lead over Florida State through a strong effort on the defensive end. With 6:30 remaining in the first half, Spear kickstarted the Demon Deacon offense by knocking down a three, her second of the night. On the ensuing possession, sophomore Khai Harrison joined in with a strong transition, leading to an easy layup from senior Gina Conti. At the end of the half, Wake Forest found themselves up 35-24, much due to Florida State only hitting 34.5% of their shots from the field.

The Demon Deacons opened the third quarter continuing their prolific shooting, scoring the first seven points. Jewel Spear led the charge, scoring seven points in the first three minutes of action, forcing Florida State to call a timeout. After the break, Wake Forest forged ahead with a Conti three-pointer. With 6:32 remaining in the quarter, Spear drove in the paint for a basket and a foul, extending the lead to nineteen. The Seminoles appeared to mount a small comeback, scoring five straight points, but ended the quarter still trailing 54-42.

In the fourth quarter, Wake Forest hit cruise control, maintaining a reasonable lead throughout. Three and a half minutes into the final period, Raca found Spear on a spectacular cross-court pass, who then pump-faked a defender to open up space for a three. Raca once again displayed her dominance with just over two minutes left in the game, forcing her way through the Florida State defense for an and-one bucket, pushing the Wake Forest lead to twenty, the largest of the game.

The star of the night for the Demon Deacons had to be Raca, who finished the game with twenty-four points, one-off her season-high. Following a tough game against Louisville, Hoover was pleased to see Raca get back on track.

“That was a huge game for her. She did a great job getting her mid-range in a variety of ways.”

Pleased with her ball distribution, Hoover also explained, “I thought she did a great job finding other people, because she’s starting to see how much attention she’s garnering.”

Following a heartbreaking 63-65 loss to No. 1 ranked Louisville, Hoover was happy with Wake Forest’s ability to hit the ground running.

“For us to bounce back … I couldn’t be more proud,” she said.

Just three days after a comprehensive victory against Florida State, Wake Forest regressed, losing to a debatably lesser team in Clemson. Wake Forest’s offense continued to shine, but when shots missed, the Demon Deacons were not there to corral them, and on the defensive end, they gave up 11 offensive rebounds. After outrebounding Florida State by 11, Wake Forest turned around and lost on the boards 18-37.

“[I am] so disappointed in our lack of execution on boxing out,” Hoover said after the game. “I wish I knew [what was different from the Florida State game] … I knew that was [going to] be a difference-maker in the game.”

In the first quarter, early turnovers and four fouls in the first three minutes led to five points for Spear. With Wake Forest beginning the game strongly, Clemson was forced to call a timeout with the Demon Deacons leading 10-4. Out of the timeout, Clemson caught fire, rattling off seven straight points. Wake Forest went on to shoot seven of eleven from the field, ending the quarter leading 20-15.

Clemson began the second quarter on an 11-2 run, causing Hoover to call a timeout. The Demon Deacons came out of the timeout looking reinvigorated, scoring four straight points, including a Raca three-pointer with fifteen seconds left in the half. Clemson guard Gabby Elliott came right back down the court to knock in a buzzer-beater shot for two, giving Clemson a 36-33 lead at halftime. They were piloted by guard Delicia Washington, who shot 70% from the field for fifteen points.

In the third quarter, Clemson was spurred on by a Morra turnover, which led to a Kendell Spray three-pointer. Spray went on to score the first eight points of the quarter for the Tigers. With 5:08 in the third quarter, Wake Forest looked primed to launch a comeback, with Spear knocking down a three to put the Demon Deacons within one point. At the end of the shot clock, Spear sent a contested three-pointer through the net with just over a minute left in the quarter, reducing the Clemson lead to 50-48.

Beginning the fourth quarter trailing 54-48, Raca hit a shot from behind the three-point-arc, decreasing the Demon Deacons’ deficit to just three points. Wake Forest was also bolstered by three three-pointers by Spear in just over one minute. With less than a minute remaining in the game, Washington drove down the lane knocking in a massive bucket for Clemson, only to get overturned by an offensive foul. Down by three, Conti missed a layup, rebounded by Clemson, who called a timeout. With no timeouts left, Clemson struggled to inbound the ball, missing the pass and turning the ball over, giving the Demon Deacons one last shot. Spear missed a deep, game-tying three that would have sent the game to overtime, giving the Tigers a three point victory.

After a tough loss, the schedule only gets tougher for the Demon Deacons, who travel to Syracuse and Georgia Tech this coming week.

In her postgame comments, Hoover remarked, “This one is gonna sting for a day and then tomorrow … you [have to] know that we’re still the same team that has had better days.”