Looking ahead to the spring season 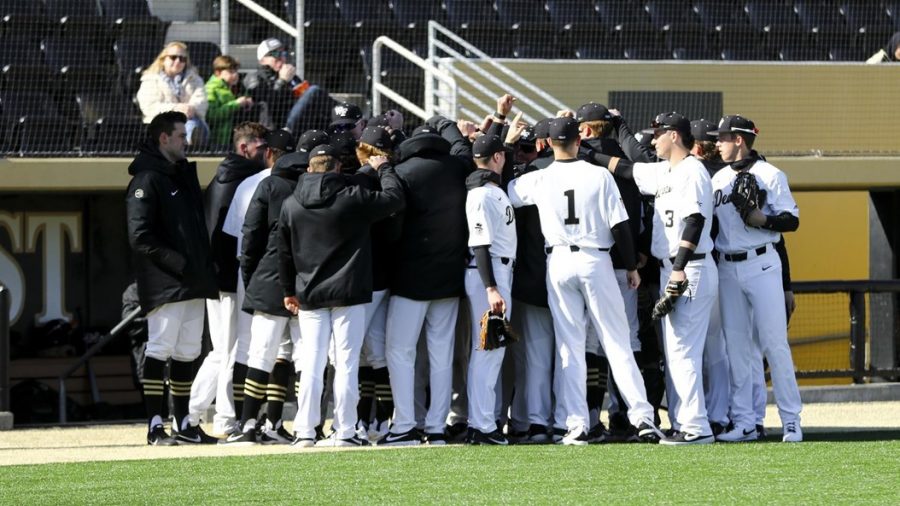 Nearly 11 months ago, the appearance of a virus completely re-shaped the planet as we know it. Ever since COVID-19 reared its head, nothing in life has been a guarantee. The little things that seemed necessary to life were put on hold, including sports, a pastime that means so much more than a number on the back of a jersey, or a mascot that represents a city. Everyone lies on a spectrum when it comes to how large of a role sports play in their lives, but we can all agree that they matter. For nearly a full calendar year, fans and players were kept away from their fields, courts, courses and arenas as games were put on hold with no timeline for return in sight. We could all look at the “break” as frustrating and unfair. But, let’s take a different approach and come together to appreciate our love for the game. Now, sports are back. Basketball, soccer, tennis, golf, baseball, track and field and volleyball! All in the spring season! Let’s break down some of the sports and make a few predictions on the way, shall we?

A team full of spirit and short on experience, the beginning of the season for Wake Forest can be described as an encouraging start of the Steve Forbes era. Victors of two of their last three games, Wake Forest must find a way to win on the road. The next three games are all away from home, where Wake Forest is 0-5. Following a loss to Notre Dame, the Demon Deacons hope to take care of Boston College before playing a much better Florida State team. Wake Forest then comes home for three potentially winnable games against Duke, Clemson and NC State, who have gone a combined 2-12 away from their respective home courts. I see the Demon Deacons taking one of their last three games, with the arduous task of finishing the season against Virginia Tech, Georgia Tech and Pittsburgh. Wake Forest is trending in the right direction, and seven wins against formidable ACC opponents would be a success in the first year for Forbes.

In a season where senior superstar Ivana Raca has exploded (No. 4 in the ACC in scoring), the squad flew out of the gate with an impressive start, including winning four of their first five games. While they’ve lost three of their past four games, all the teams faced were at the top of the ACC standings. Playing Syracuse (7-2) and Georgia Tech (6-3) on the road is no easy task, but the schedule lightens up with Pittsburgh and a revenge game against Clemson coming up. I see Wake Forest losing the two road games but winning the following two games. Circle your calendars for Feb. 18 when they go against NC State, winners of 11 straight. The final two games are split between Miami and Florida State. I believe the team can reach its most conference wins in history and sneak its way into March Madness.

After suffering just one regular-season loss in the fall season to Clemson, Wake Forest was upset in the semifinals of the ACC Men’s soccer championship by No. 4 Virginia at Spry Stadium. With a less than ideal ending to the first half of the season, the Demon Deacons were rated as having the second-best 2021 recruiting class, according to an analysis by TopDrawerSoccer. It’s only fitting that this class joins the squad after four Demon Deacons were recently drafted to Major League Soccer: Calvin Harris, Mike Deshields, Justin McMaster and Andrew Pannenberg. Of the seven upcoming spring games, I see the Demon Deacons running into some trouble with Clemson and Notre Dame. Both of these games are away, and Wake Forest will hope to avenge their loss against the Tigers. However, I think Wake Forest will ultimately prevail and head to the NCAA tournament undefeated.

The Wake Forest women’s soccer team will play a shortened spring season consisting of six games: two at Spry Stadium and four away from home. The team enters this spring with some momentum, after finishing out the fall season winning three of the last four games. This may be the toughest schedule to predict, as several of the opponents didn’t play any games in the fall. With that being said, look for Wake Forest to get resounding wins against Elon and Appalachian State, and couple that with a tie against evenly matched Louisville and a loss to a strong NC State team. The two games against SEC threats Tennessee and Georgia could swing either way. I see the Demon Deacons coming up with one win there, leaving Wake Forest with three wins, two losses and a tie.

For a Wake Forest baseball team that has finished with a winning record in seven of the past nine seasons, the expectations are high this year. According to D1Baseball.com’s rankings, the Demon Deacons are slotted at No. 17 in the nation heading into the season. That rank will be put to the test as the squad matches up against six consensus top-25 teams in No. 5 Louisville, No. 13 NC State, No. 15 Georgia Tech, No. 16 Virginia, No. 21 Miami and No. 24 Florida State. The team plays 52 games this season, 27 of which are at Couch Ballpark and 25 of which are away from home. The team is both experienced and hungry, as it came just short of making the NCAA Tournament in the 2019 season (there was no tournament in 2020 due to the pandemic). 2019 ACC Player of the Year and the nation’s leader in runs batted in, senior Bobby Seymour, looks to once again make his mark. The weakness during the prior season was pitching, as the Demon Deacons finished dead last in earned run average in the ACC. If they can get over this hump, watch out. I see Wake Forest taking care of its non-conference opponents for the most part, but the challenge lies in the competitive ACC. A few of my favorite must-watch series are: vs Georgia Tech Mar. 19-21, at Louisville Apr. 2-4 and vs NC State Apr. 30-May 2.

When talking about tradition in sports, look no further than golf at Wake Forest University. With Arnold Palmer, Webb Simpson, Jay Haas, Curtis Strange and Lanny Wadkins, where can you go wrong? It has been much of the same for the men’s golf team this year. Wake Forest finished second out of a whopping ten teams at the Seminole Invitational to open the season, and then followed that up with another second-place finish among 17 teams at the Arizona Intercollegiate. The attribute that sets apart this Wake Forest team from its competitors is organizational depth. Sophomore Mark Power led the team in the first tournament, tying for third with a seven-under-par finish to open the season, with seniors Parker Gilam and Michael Brennan not far behind, both tied for fifth. In the following tournament in Arizona, Brennan led the way finishing tied for second at two-under-par. Junior Alex Fitzpatrick finished in fourth place, while Power once again placed in the top ten. Looking ahead, Wake Forest will compete in five more tournaments before the ACC Championship, NCAA Regional and NCAA Championship. The most recent poll from Collegiategolf.com has the Demon Deacons at No. 17 in the country and atop the ACC with 165 points. Look for Wake Forest to get a first-place finish in one of their upcoming tournaments, with my money being on the Wake Forest Invite at Pinehurst at the beginning of March. With the way the Demon Deacons have been playing, there’s no reason to think that they can’t take home the ACC Championship and potentially make a run for the NCAA Championship title.

With the season just now kicking off, the Wake Forest women’s golf team looks to expand on its strong 2019-2020 season that was cut short due to COVID-19. The team was able to get through six official tournaments, in which they finished first place in three outings and second in another. The Demon Deacons also took home the East Lake Cup, their first-ever win in a match play event. The season kicked off with the UCF Challenge where freshman Mimi Rhodes finished tied for No. 15 after day one and was joined at the top by sophomores Rachel Kuehn (tied for second) and Lauren Walsh (tied for sixth). Mark your calendars for Apr. 15-18, with the ACC Championship taking place in Greensboro. This could be a predictor of how the Demon Deacons will fare in the NCAA Regional and NCAA Championship.

Be prepared for the Wake Forest men’s tennis team to continue its recent streak of excellent campaigns in 2021. Just three years ago the team won the National Championship against No. 3 Ohio State and followed this success with another championship run the following year, falling just short to Texas. The Demon Deacons have put on a show at home, going 60-1 at the Wake Forest Tennis Center in the past three seasons. Wake Forest was also ranked No. 3 in points to end the last season. This time around, the preseason top-25 rankings from the Intercollegiate Tennis Association had the Demon Deacons at No. 12 in the country.  This season, Wake Forest will be without star graduating seniors Alan Gadjiev, Julian Zlobinsky and Petros Chrysochos. After the cancellation of their first five matches, Wake Forest fell short in its opening match against Oklahoma (four sets to none). Nonetheless, the team bounced back to win its next three matches by a combined 15 sets to five. Bar Botzer captains the squad as the only remaining player from the National Champion team, and he was riding a five-match win streak before last season was cut short. If the Israeli native can continue his A-game, alongside experienced players in junior Siddhant Banthia and redshirt senior Eduardo Nava, there’s no limit for this team.