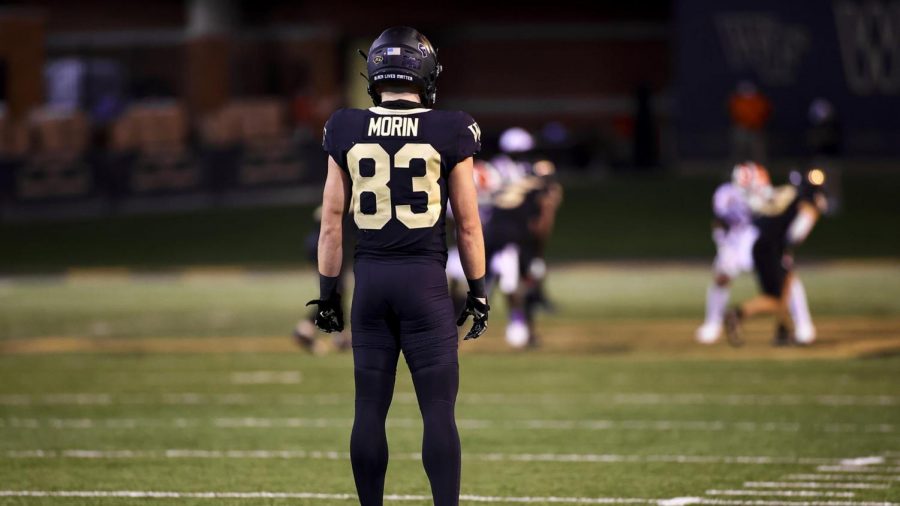 It was late in the fourth quarter, and No.1 Clemson was beating Wake Forest 37-6 when backup quarterback Mitch Griffis flicked a one-yard toss for Wake Forest’s only touchdown of the game. The receiver was No. 83, Taylor Morin, and that catch would be the first touchdown on the Demon Deacons’ season, as well as of Morin’s career. Morin, however, is a competitor; he isn’t satisfied with those kinds of statistics.

“Yeah, it was my first college TD… but I wanted a TD that was a little more meaningful,” Morin said nonchalantly.

That’s No. 83 for you –– throwing personal stats to the wayside, team over self. That quality is what would come to define one of the most dangerous and potential-full wide receivers in the ACC this season.

“He scores his first touchdown, and we lose. But the way he dealt with it, it was just different,” he said.

Originally from Chantilly, Va., Morin is a redshirt freshman who comes in at 5’10” and 174 pounds. At first glance, he doesn’t seem to be much of a weapon. But when he plays, it’s a whole different story. This year, he had the third-most receiving yards on an extremely talented depth chart, as he claimed 25 receptions for 291 yards, an 11.6-yard average, and a pair of touchdowns. He had a 32-yard snag in there as well. With the highly efficient Hartman under center and a corps of excellent receivers, it isn’t easy for a guy like Morin to stand out on a team like Wake Forest. Because of his talent and hard work, however, he is able to do just that.

“He’s smart, he’s tough, he has all those tangible qualities that we look for,” Head Coach Dave Clawson said.

This year, Morin has been standing out, and other ACC teams have likely picked up on the hint: not paying attention to Morin in high school was an awful mistake.

He didn’t receive a single offer from another ACC school, including the two inside of his home state (colleges that Wake Forest went 2-0 against this year).

“Wake Forest was my only power five offer, which I carry as a huge chip on my shoulder,” Morin said. That chip is cloaked by his humility, however, as he is known for keeping a level head and never getting cocky. Morin has a similar attitude to that of an underdog.

“He definitely knows he’s good –– he’s never going to tell you that though,” Hartman said.

Yes, he knows that he’s good, but why he believes that he’s good might come as a surprise. The average Division-I football player is three inches taller than Morin and over 60 pounds heavier. There’s no doubt that he’s an underdog when it comes to size, but Morin has his own theory on that. He doesn’t look at his size as a disadvantage. Instead, he believes that he excels in many ways because of it. Morin thinks that maybe he’s good, in part, because of how he’s built. He’s not wrong.

“Even though I am a smaller guy, I think it’s a little tougher for bigger guys to cover me,” Morin said. “I like Julian Edleman [wide receiver for the New England Patriots], he’s not the biggest guy in the room either.” Hartman echoed these same ideas.

Not unlike Edelman or Dortch, Taylor makes the term underdog an oxymoron. He takes what is supposed to be a disadvantage, and turns it into an advantage. This helped Morin as a recruit as well. Knowing that he would be overlooked by a lot of people, he only needed one look from that big program that would take a chance on him.

“[In high school] I did everything in my power to show coaches that I had what it took to play at such a high level of football,” Morin said.

Wake Forest took that chance, and it paid off nicely. While he does use his size to his advantage, it’d be outlandish to claim that he doesn’t have to put extra work in. Simply put, it’s just much easier to play WR if you’re 6’10” and 220lbs. Morin’s not –– so why is he so darn good? Because of his drive.

This is another point that Morin made about himself. Morin knows that regardless of his size, he can always work to expand his knowledge of the game. This intelligence that he is constantly building upon may also play a part in how he can make some defenses look downright stupid. His intense preparation is partly what makes QB1 so comfortable throwing to him.

“He’s one of those guys that I know before the game, Taylor is ready to go –– we’re ready to go,” Hartman said.

Always being ready to go is great. So are athleticism, IQ, speed, agility and trust. But is it all that Morin is? Not exactly. “A constant focus on humility, character and there being a purpose greater than ourselves” is what Bemiss said is most integral for excelling in Wake’s program under wide receivers coach, Kevin Higgins. Morin has these qualities. He’s humble, and he knows that he’s a part of something much bigger. Having these thought processes is how he is always able to remain focused on the future.

“At the end of the day football will end for me at some point or another,” Morin said as he explained why he chose to be a Demon Deacon. “I wanted to make sure that I had a meaningful degree that I could fall back on.”

His constant focus on what’s next and his preparation covers all the bases of what the journey to success looks like. Guys like Morin don’t succeed because they’re athletic, or smart, or shifty, because they have good hands or because they run a 4.47 40-yard dash. No. They succeed because of who they are. So who really is Taylor Morin?

Well, he’s a player with a heck of a stat line. He’s a receiver. He’s one of Hartman’s favorite targets. But at the end of the day, he’s just a 19-year-old kid from Chantilly who will always outwork the next guy. No matter if they’re taller, stronger, faster, smarter or all four — when they go head-to-head with No. 83, competitors will be outworked. And that’s what makes Taylor, Taylor. “I want to be remembered as the hardest worker in the room,” Morin said.