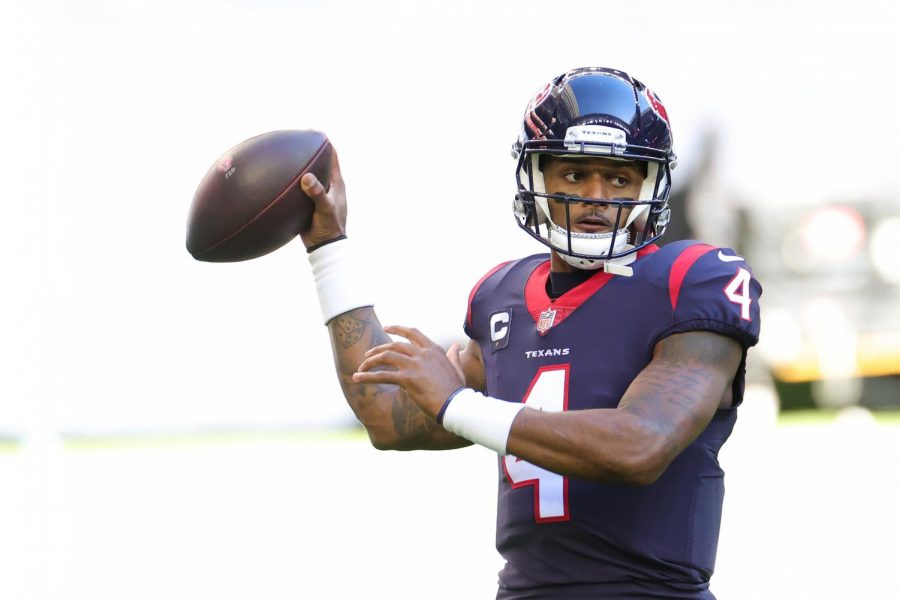 Watson in action against the Tennessee Titans in Jan. 2021

Earlier this week, the football world was shocked by the news surrounding the disgruntled Detroit Lions quarterback, Matthew Stafford, finally getting his promise of greener pastures. The Los Angeles Rams scooped up the 32-year-old former Pro Bowler in exchange for two first-round picks, a third-round pick and the first pick of the 2016 NFL Draft, quarterback Jared Goff, in what might be one of the biggest blockbuster trades in recent history. With Stafford getting his wish, the football community turns to another quarterback looking to move out of a miserable situation.

Deshaun Watson has done many things for the Houston Texans over the past four years, beginning with the day he first got his chance to start. Even with an unfortunate ACL tear during a non-contact play in practice, his first three years highlighted his immense potential. His applauded scrambling ability and great accuracy were the focuses of many NFL writers. To many Texan fans, he was supposed to be the last piece in the puzzle that would push this team towards Super Bowl contention, but now, all seems lost.

In the span of one year, Houston’s front office and on-field coaching have found a way to frustrate their top asset. Looking back at some of the decisions, it has become clear why Watson would want this move. First, the catalyst to this entire saga starts with trading Watson’s top receiver and certainly one of the best receivers in the game, DeAndre Hopkins.

With Head Coach and newly appointed General Manager Bill O’Brien taking the reins of the operation, the whole football community saw a team go from a divisional playoff game against the eventual Super Bowl champions Kansas City Chiefs to showing signs of panic and desperation with a ludicrous move. Additionally, tension ensued between the leadership and their star QB due to the lack of input Watson was allowed in reconstructing the front office of the organization, even though new Texas chairman Cal McNair promised to Watson that his voice would be heard. Finally, the overall success of the team has certainly been lacking this past year; O’Brien was fired after an 0-4 start the season, and the team was not able to turn the season around, and finished 4-12.

Watson’s time with the Texans seems like a footnote in forgotten history as he now looks to find success in a different venue. One team that has been getting the headlines, and now seems more realistic after the Stafford move, is the Miami Dolphins. In a similar situation to the  Rams, the Dolphins have finally put together a roster with a strong potential to become Super Bowl contenders. But some wonder how much they trust their young quarterback, Tua Tagovailoa, especially when the possibility of getting Deshaun Watson is on the table. This trade could also help the Texans by getting their first-round pick back, which was lost when they traded for offensive tackle Laremy Tunsil.

Another prospective organization that seems to be in the running for the quarterback is fellow AFC East team, the New York Jets. People in the Big Apple are thinking the Sam Darnold era may be over as the Jets hold onto the No. 2 pick in the 2021 draft and are looking at all the possibilities including at quarterback. Also, the hiring of new Head Coach Robert Salah is seen by the league as a refreshing departure from the questionable hires in the past, such as the hiring of Head Coach Adam Gase. While the Jets are obviously a struggling team, a move for Watson could put them in the driver’s seat to complete their rebuild much sooner than what may have been previously expected.

A final potential destination for Watson is an NFC organization, the Carolina Panthers. Current Panthers signal-caller, Teddy Bridgewater, had a wonky 2020 season several moments of great success. But concern arose about Bridgewater’s ability to take the next step into becoming a higher-level talent. While not owning as high of a draft position as the Jets or Jaguars, the prospect of Watson working in an offense led by Joe Brady and Matt Rhule could prove to be dynamic.  Furthermore, the team would have running back Christian McCaffery and an underrated receiving core with talents like Robby Anderson and DJ Moore. Certainly, the Panthers may be a favorable place for Watson to take his immense talent.