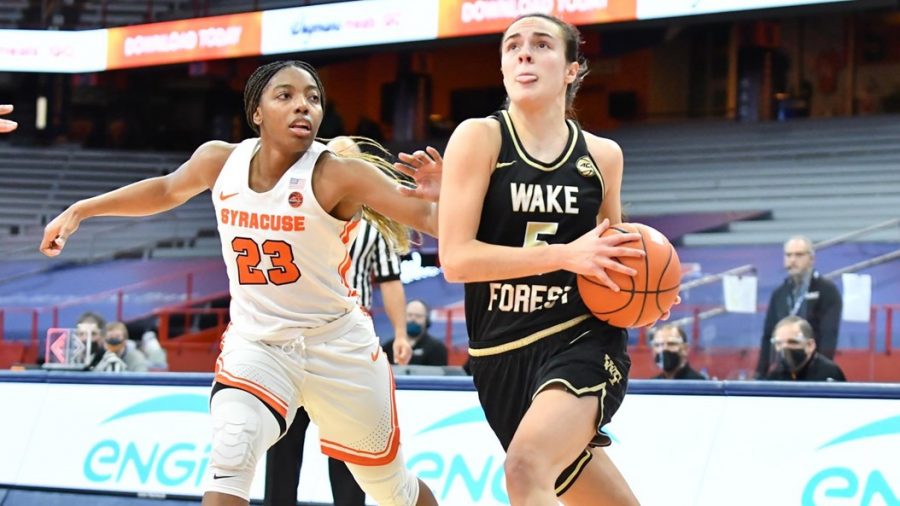 Despite an impressive outing from senior Gina Conti, Wake Forest dropped their matchup against Syracuse on Feb. 4. Conti led the Demon Deacons with 25 points, marking the fourth time in her career that she has scored more than 20 points in a game. Senior Ivana Raca also posted a double-double, her sixth of the season, while junior Christina Morra and freshman Jewel Spear added 17 and 11 points, respectively.

In the first quarter, Conti was the catalyst for the Wake Forest offense, scoring the Demon Deacons’ first five points. With Syracuse having to guard Conti more heavily, Spear, who scored 24 points against Clemson, sprung into action and scored twice in a row to lead the Demon Deacons to a 14-12 lead with three minutes remaining in the quarter. By the end of the first stanza, Conti had knocked down five of six shots from the field and two of three from behind the three-point line, giving Wake Forest a slim 19-18 lead.

The Demon Deacons started hot in the second quarter, as they forged ahead to a five-point lead following a Spear three-pointer. At the time of the three, Wake Forest was holding the Syracuse offense to just 35% shooting. With four seconds left in the half, Raca bounced in a layup off the glass, giving the Demon Deacons a 37-35 lead. Yet, a three-pointer at the buzzer gave Syracuse a 38-37 lead going into halftime.

The third quarter proved to be the downfall for Wake Forest, with Syracuse extending their lead to as much as 10 points. The Deacons fell victim to a consistent issue that has plagued the team for much of the year: rebounding. Wake Forest was outrebounded by four against the Orange.

“This team is not going to win games if we do not defend and rebound. We know that right now, that is our Achilles heel,” Wake Forest Head Coach Jen Hoover said following the game.

With 2:43 left in the quarter, back-to-back three-pointers from Raca shrunk the Syracuse lead to 54-49. By the end of the quarter, the Orange had extended their lead to 62-54.

In the fourth quarter, Wake Forest was able to stay within striking distance, closing the gap to 79-71 with just over a minute remaining. With 12 seconds left in regulation, Morra gave Syracuse fans a scare, converting an and-one to bring the Demon Deacons within four. The Orange were able to knock down their free throws to close out the game. The final score: 85-78.

“We scored 78 points, which is great, but we cannot give up 85,” Hoover remarked in her postgame press conference. “It still comes down to who is going to get down in a stance and defend and rebound. If we do that, then we will start coming out on the right side of the equation. As long as we continue to try to outscore teams [we won’t come away with wins]. We are just not built that way. We have got to be the tougher team, and we were not that for the entire 40 minutes.”

After losing against Georgia Tech earlier in the season, Wake Forest found a way to turn the tide on their season by definitively beating the Yellow Jackets. With the win, the Demon Deacons snapped an 11-game Georgia Tech winning streak.

Raca followed up her double-double against Syracuse with yet another, her seventh of the season; she scored 11 points and posted 12 rebounds in the matchup on Feb. 7. Conti once again led the Deacs with 20 points, while Morra and Spear also pitched in, each of them recording double digits.

Wake Forest came out with a definite game plan, targeting Morra in the low post for their first three possessions in the first quarter. The forward converted two in the paint to give the Demon Deacons the 4-2 lead at the 8:07 mark. With under three minutes left in the quarter, Conti added to the Wake Forest offense by scoring four straight points. Georgia Tech responded with an 8-2 run, and the quarter ended with the Yellow Jackets leading 17-10.

Georgia Tech scored the first points of the second quarter, but didn’t score again in the following five minutes as the Demon Deacons posted 10 straight points. Wake Forest was led by Spear, who knocked down two three-pointers during the run. With 20 seconds remaining in the half, Raca found Conti, who drilled a three-pointer from the left wing to give Wake Forest a 27-26 advantage going into halftime.

The third quarter was tightly contested, but with 3:38 remaining, Raca hit a deep three, extending the Demon Deacons’ lead to seven, their largest of the game. Georgia Tech tightened the Wake Forest lead to four by the end of the quarter.

The Demon Deacons were spurred on by their defense in the fourth quarter, keeping Georgia Tech from finding any rhythm. With 2:42 remaining in the game, Wake Forest blew open their lead and went on a 6-0 run, including a three-pointer from Conti. The Demon Deacons went on to close out the game by a final score of 61-52.

“That is a signature win,” Hoover said following the game. “I told our kids that this team is going to finish third in our league if it ended today. They are an extremely talented team, and we knew that … We really wanted another chance at them because we felt like it was such a bad game the first time, and we just gutted it out and showed a lot of grit today.”

Wake Forest returns to Winston-Salem to face off against Pittsburgh on Feb. 11 before traveling to Clemson on Feb. 14.