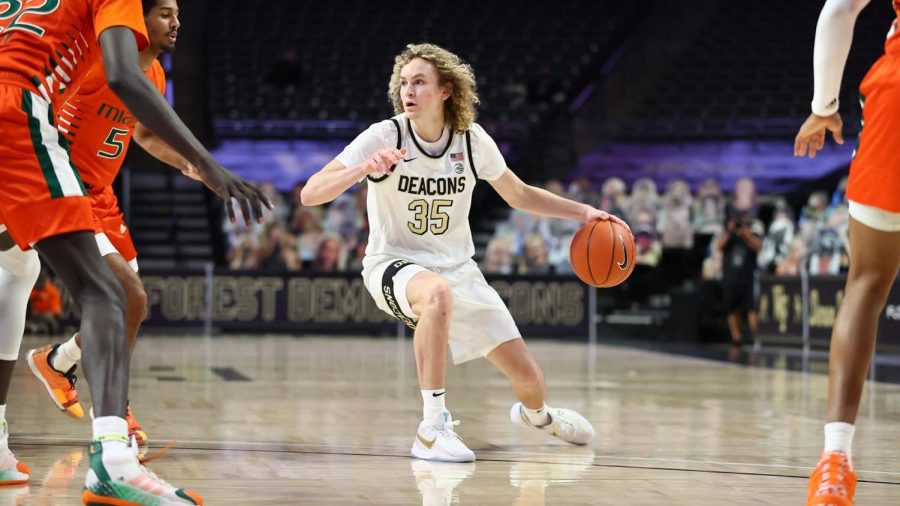 Class of 2021 basketball recruit Carter Whitt has arrived in Winston-Salem earlier than expected. The 6’4”, 180-pound early enrollee hails from Raleigh, N.C. where he played three years of high school basketball at Leesville Road. As a junior, he averaged 21 points, nine rebounds, and eight assists per game. Following that campaign, Whitt transferred to Brewster Academy (N.H.) where he graduated in December. Joining the team on Dec. 21, the point guard has appeared in ten contests, averaging 20 minutes, 4.7 points and 2.1 assists per game.

Cooper Sullivan: As an early enrollee and high school senior, you are the youngest player on the team. What was the main factor behind your decision to make the jump and enroll early at Wake Forest?

Carter Whitt: I would say that the year has been so weird and [I couldn’t pass up] the opportunity with Coach Forbes being here. It’s a rebuild, but Wake Forest has always been a good basketball program. We are going to be good here with Coach Forbes, and I think everyone really believes that. So, that opportunity and the nature of this year definitely played a big part in me coming at this time.

CS: You’re playing with and against guys who have had many more years of experience than you. Are you becoming more comfortable on the court as time goes on?

CW: Yeah, I would say so. There have been some games with no setbacks and there have also been some games that haven’t been great. But every game I’m learning more and more, and I feel like I’ve gotten more comfortable each game too. I feel like it’s becoming more normal now, which is good.

CS: You’re playing some pretty meaningful minutes and averaging about 20 minutes per game. Did you come here expecting this much reliance from Coach Forbes so early on?

CW: Originally, it was kind of weird. I didn’t know if I was going to play or not, and then some stuff happened to our team with injuries and guys being out. When that happened, I thought that I would definitely have the chance to earn a lot of minutes and have a chance to contribute to this team in a big way.

CS: Has the reality of playing ACC basketball really struck you?

CW: I don’t know. I started against UVA, in our second ACC game, and I remember thinking ‘Wow, I was here only a year and a half ago on a visit. Now I’m playing here against UVA.’ It was crazy. Playing Duke was another “wow I’m here” moment. I still haven’t been able to soak it all in.

CS: Has there been anyone specific who has taken you under their wing?

CW: Honestly, everyone has done so in different ways. The way the team has been accepting of me coming mid-year has been great because that doesn’t happen a lot. Everyone’s gotten along really well and has helped me in a lot of different ways.

CS: On Jan. 30 against Miami, you scored 11 points in what was your best performance so far this season. After the game, Coach Forbes said that if you start making three-pointers more consistently that ‘would definitely help the team a lot.’ Besides your shooting from behind the arc, what else have you been working on to improve your game?

CW: The biggest thing is when I get into the lane. It’s a lot different than high school or AAU. You have to make decisions quickly and see the floor better, but those are things that will come with time.

CS: Something you and the team as a whole have been struggling with is turnovers. What have some of the older guys or coaches been telling you to calm you down in those tougher situations?

CS: After the Feb. 2 game against Notre Dame, Coach Forbes said that the team is ‘infected with a disease of me.’ Do you think the team chemistry is really gelling right now?