Approximately 75 students and alumni protested Friday afternoon at the University Parkway entrance to campus demanding an end to the quarantine in-place policy, hazard pay and accountability 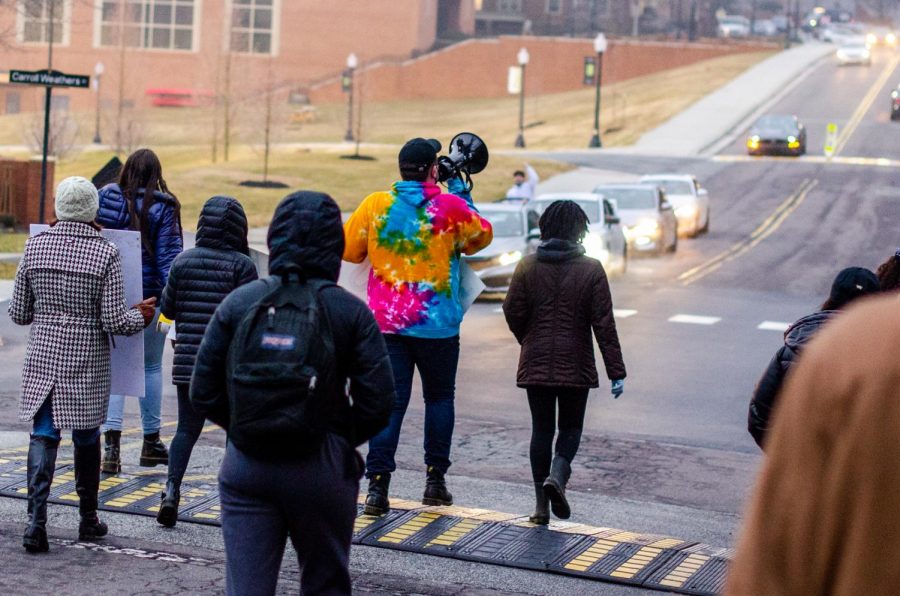 On Friday afternoon, students gathered with picket signs at the University Parkway entrance to protest Wake Forest’s quarantine-in-place policy. Chants of “where is the consent?” “no humanitate” and “what do we want? Accountability!” rose up from the group.

The crowd of approximately 75 people — which consisted of students, alumni and members of the Triad Abolition Project — largely kept to social distancing rules while venting feelings of frustration that student voices were not being heard or considered. Those protesting expressed their belief that students’ safety had fallen by the wayside as the total number of cases for the semester hit an all-time high at 711.

“It seems like time and time again, the university is choosing ‘pro dinero’ over ‘pro humanitate,’” said junior Pheng Pickett. “There’s just a real lack of care for the welfare of students in more than one way.”

When asked what message the protest was trying to send to administrators, sophomore Dianna LaTerra, who helped organize the protest, said that the goal was to signal to the administration that students deserve a voice in the policies that affect them directly.

“[We just want them to] listen to us,” LaTerra said. “We feel like a lot of people have voiced their concerns and it’s being written off [by administrators] as a big rhetorical strategy.”

Many of the other student speakers echoed LaTerra’s sentiment that student voices were being pushed to the wayside.

“We have not been heard,” one speaker said. “What [Wake Forest] hears is Greek Life, what they hear is PR.”

Many students at the protest also expressed their support for student employees’ — especially resident advisers’ — demands for hazard pay amid the new quarantine policy. Other students, including some recent alumni, called for a complete campus shutdown.

“Seeing where [Wake Forest] is right now, it’s just really disappointing that this is how they’re handling it and treating their students and employees,” said Class of 2020 alumna Cydney Meadows. “I believe that they need to start giving employees hazard pay, and they need to find another way to quarantine students … [the administration needs to] go to red.”

One speaker, junior Chris Cates, denounced the university’s priorities in addressing the recent surge in cases as racist. Cates remarks were met with murmured agreement by many of the protestors in attendance.

Pickett echoed that concern, also pointing out that the university’s rise in COVID-19 cases prohibited many in-person Black History Month events from taking place as planned.

After being called out by a speaker for not standing up for student concerns, Student Body President Miles Middleton addressed the crowd.

“I work for you, there is no doubt in my mind about that,” Middleton said. “But I need to know your concerns so that I can bring them up [with administrators].”

However, soon after Middleton started speaking, a protestor with a megaphone drowned out his voice. The protestor argued that students had been reaching out to Student Government with their concerns, to no avail.

Afterward, one speaker derided the forum Middleton held earlier on Friday with Wake Forest Baptist Medical Center’s Chris Ohl. During that forum, Ohl voiced confidence in his assessment that the quarantine in-place policies do not put students at risk of contracting COVID-19.

“If they cared [about assuaging student fears], they would have sent an email [asking for student questions],” said Rue Cooper, a senior and one of the event’s organizers, after Middleton had finished speaking.

Middleton, however, said he was unfazed by the backlash.

“I’m totally fine [with being interrupted], I’m used to this stuff,” Middleton said after stepping back from the crowd. “I would say I do support what they’re doing, but like I said, I can only work for them if they work with me … if you’re going to call me out, let me know what your concerns are.”

The Protest Moves to Hearn Plaza

There was a brief attempt to stop traffic toward the end of the protests, however, student leaders withdrew from the street after the administrators present expressed concern for student safety. The protest then moved to Hearn Plaza. There, students marched around before rallying briefly in front of Reynolda Hall.

Dean of Students Adam Goldstein, whose office controls disciplinary procedure, said at the beginning of the protest that students would not be punished for attending or protesting.

“I heard about the protest, and I’m concerned about safety because of the road,” said Goldstein. “[With that being said,] I will not be imposing sanctions on students for coming out here.”

The students involved in the protest are hailing it as a success, though it is unclear if the administration will respond to the student’s demands.