Wake Forest currently sits on ESPN’s last four in on the bubble, which could mean a return to March Madness for the first time since 1988 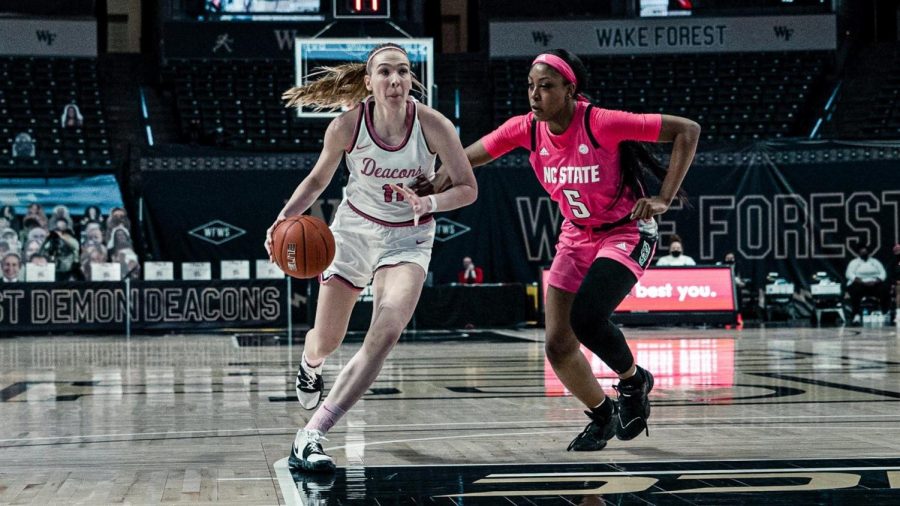 In a game where Wake Forest trailed significantly heading into the fourth quarter, the team still found a way to win. This aptitude will, in an all too important season, help the Demon Deacons down the line in their push to return to the NCAA Tournament for the first time since 1988. Back then, current head coach, Jen Hoover, was playing for the team.

“This was a must-win,” Hoover said after the game, in response to a question regarding Wake Forest’s status on the bubble.

In the first quarter, senior Gina Conti ran the offense for the Demon Deacons, scoring an and-one within the first minute. Freshman Jewel Spear hit from behind the three-point line to extend the Wake Forest lead to 7-4 within the first three minutes.

While the Demon Deacons were able to hit their three-point shots, Pittsburgh struggled mightily, missing their first five. The Panthers only converted three of their first 14 shots during the first half of the quarter. With two minutes remaining, Pittsburgh found their first lead of the game, knocking down two free throws following a foul committed by sophomore Kaia Harrison. The foul was questioned heavily by Hoover, who argued extensively with the referees. Following the call, the Demon Deacons were spurred on by junior Christina Morra, who made back-to-back shots. Wake Forest finished the quarter by scoring six unanswered points.

Pittsburgh came back in the second quarter by scoring seven straight points, taking a 17-15 lead. The Demon Deacons responded with a streak of their own, scoring four consecutive points. The second quarter was highlighted by many missed shots, with the half ending with Wake Forest on top, 23-20. In the first half, the Demon Deacons shot 9-29 from the field, while the Panthers went 8-34.

Junior Jayla Everett began the scoring in the second half, hitting nothing but net from behind the three-point line, tying the game for Pittsburgh. The Panthers suffered a big loss early on though, as sophomore Rita Ogbokwe had to go to the bench with three fouls, after earning two in quick succession. With Ogbokwe off the court, the Demon Deacons found a short spurt of production, scoring four straight and forcing the Panthers to call a timeout. The streak was ended by a three-pointer off the hands of the senior guard, Gabbie Green. Her shot put Pittsburgh back in the lead. Following a two-pointer from senior Ivana Raca, Pittsburgh rattled off four points in Getsuccession and extended their lead to three. Conti brought the game back to even on an and-one basket. Pittsburgh ended the quarter on a four-point run. Heading into the final stanza, the Panthers led 41-36.

In the fourth quarter, Wake Forest and Pittsburgh began by trading baskets. After that, the Panthers went on a five-point run, leading 47-40 following a Green three-pointer. With 4:33 remaining in regulation, Wake Forest found themselves trailing by 10 going into a media timeout. After the break, the Demon Deacons found a way to claw back. After rattling off four straight points, sophomore Alexandria Scruggs forced an and-one foul, bringing the deficit down to three points. With under a minute left, Conti hit a three to tie the game. At the buzzer, Scruggs missed what would have been a game-winning three-pointer.

In the overtime period, Wake Forest started off red hot, quickly opening up a five-point lead. Pittsburgh was able to bring themselves back into the game with an Everett three-pointer. With under a minute remaining and the Demon Deacons leading by one, Conti went to the free-throw line and hit both of her shots, extending the Wake Forest lead to three. That proved to be the final dagger, as the Panthers could not convert on a buzzer-beating three.

In her postgame press conference, Hoover expressed her pride for the team’s ability to get back into the game: “I couldn’t be more proud of them … a lot of people probably thought we were down and out … I said sometimes you have to fight the battle more than once to win.”

In another must-win game, Wake Forest traveled to Clemson and found revenge against the Tigers.

To begin the first quarter, Spear and Conti knocked down consecutive three-pointers, forcing Clemson to call a timeout 45 seconds into the game. Within the first four minutes, the Demon Deacons were able to extend their lead into the double digits. At the 4:08 mark, Harrison hit a three-pointer to give Wake Forest a 20-9 lead. That proved to be the last points the Demon Deacons would score, as Clemson went on to score six straight points to bring the deficit within five by the end of the quarter.

In the second quarter, Wake Forest found their shooting stroke once again, starting on a 10-4 run in the first four minutes. They continued their scoring, pushing their lead to as large as 14 points. To end the quarter, Wake Forest went on a 6-2 run. The half ended with the Deacons on top, 45-28.

Despite only scoring eight points in the fourth quarter, Wake Forest was able to hold off a Clemson comeback, winning the game by a comfortable seven-point margin.

In her postgame conference, Hoover said, “I am proud of this team’s focus and fire. [This win is] a tribute to this team and the staff, and just being able to really focus even when we’re away from home.”