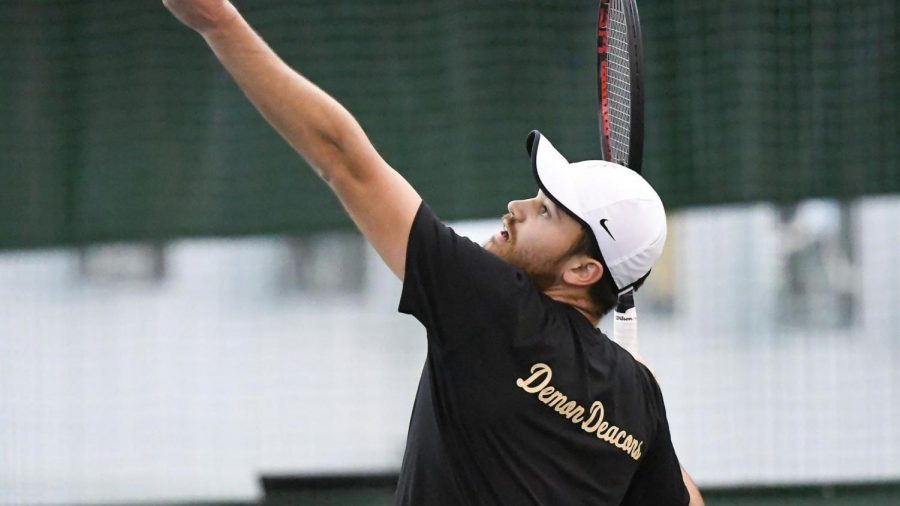 Wake Forest men’s tennis is criminally underrated. The 2018 NCAA Champions and three-time ACC Champions are back and ready for another season of success. Currently ranked No. 7 in the ACC, the team has a record of 5-2. On Feb. 13, the Demon Deacons swept both East Tennessee State and Wofford College 7-0. Other wins this season came over the University of Denver, the University of South Carolina and Davidson College. The two losses were against Oklahoma University (0-4) and the University of Virginia (2-5).

Both wins on Feb. 13 came against non-conference teams, with the Demon Deacons’ singles and doubles both dominating their opponents. Against East Tennessee State (0-4), freshmen Henri Squire, Taha Baadi and Filippo Moroni, sophomore Melios Efstathiou, redshirt junior Eduardo Nava and graduate student Adam Ambrozy all won their singles matches. On the doubles side, Baadi and Ambrozy defeated their opponents 6-4. Sophomore Siddhant Banthia and freshman Matthew Thomson also won 6-4. Squire and Nava ended their match unfinished, at a score of 5-5. Playing singles, Baadi, Nava, Morini and Efstathiou all made quick work of their opponents by beating them in straight sets.

“These two matches were really good for us because we finally have a full team after some guys battled with injuries and COVID-19 protocols,” Nava said. “Winning as a team is always good because it gives us all confidence and rhythm. Now that we have a full team, we are all able to practice with each other and it just makes our team that much more competitive. We have to continue pushing each other in practices and working hard. If we do this we can have a very successful ACC run.”

In the afternoon, Wake Forest once again dominated their opponents. In all three doubles matches against Wofford, Wake Forest started off 1-0. Even when doubles teams changed, the results did not. Banthia and Thomson had a dominant 6-1 victory, and Baadi and Efstathiou finished their match 6-3. Squire, now teamed up with Moroni, won 6-2.

The singles victories were even more impressive, as five of the six Demon Deacons won in straight sets. Freshman Luciano Tacchi got his opportunity to play his first match for Wake Forest, and defeated his opponent, Will Fullet (6-4, 7-5).

“[It] was an amazing feeling to play my first match here at Wake Forest and fortunately win the match, so I’m very happy about that,” Tacchi said. “I will keep training very hard every day with the help of my coaches. [I’m] looking forward [to] more matches and hopefully more victories for the team.”

Teammate Siddhant chimed in regarding the team’s recent success as well.

“I think winning these kinds of matches is important because it sets the tone for our team. We had a few freshmen playing their first match which will surely help them with their confidence,” Siddhant said. “It’s good to play double-headers as we can test ourselves over the weekend after a good week of training. Winning always feels good regardless of who you play.”

On the topic of keeping a winning mentality, Siddhant spoke openly about the importance of his mindset.

“I think the confidence among the boys is now growing immensely and we are happy to go into the ACC with these wins,” Siddhant said. “Today was great, everyone finished in straight sets and we are looking to build upon this momentum. We know our potential as a team and look forward to playing our best tennis in the coming weekends.”

Siddhant’s teammate, Nava, also had positive comments to share about his team’s success.

“Ultimately these matches today really helped us to learn how to win as a team rather than as individuals,” Nava said. “Facing some adversity early on in the season will help us throughout the rest of the season.”

The Deacs look to continue their winning ways against Notre Dame, who they play at home on Feb. 19.