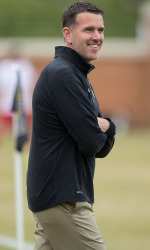 The Wake Forest men’s soccer team was one of the top teams in the country throughout the season. The team won the ACC regular season title and received the number one overall seed for the NCAA Tournament.

Two star players, Michael Gamble and Jack Harrison, were highly selected in the MLS SuperDraft. The team brought the entire community together, as the Soccer Stadium was constantly sold out throughout the season.

All of this was done after the departure of long-tenured head coach Jay Vidovich. Bobby Muuss was hired this offseason and many were unsure of what to expect. Coach Muuss was able to come in and quickly make Wake Forest a National Championship contender again.

First off coach, I want to congratulate you on a terrific season. Could you tell us a little about yourself, your background and what ultimately led you to Wake Forest?

Myself? Well, I’m a Long Island, New York guy that was very fortunate to get an opportunity to go to a Division II school in New Haven, Conn. called Southern Connecticut State University.

What drew me to Southern Connecticut is exactly what drew me to Wake Forest. I wanted to win a National Championship and it was one of the best Division II programs in the country.

Was it difficult to come in and fill coach Vidovich’s shoes after he’d been here for 22 years?

The hardest thing was replacing someone with so much history, who left a great legacy while being so successful. You come in and tiptoe on what you want to do because everyone wants to come in and make it theirs.

But I was here as an assistant for some of the best years of the program with coach Jay. You want to make it yours but you want to respect the history and the way things have been done.

Did you expect that the program would be able to win the ACC regular season title and be one of the best teams in the country in your first year?

Well, there’s always an expectation for Wake Forest soccer to be among the national elite, but I think the transition that we went through in the winter was hard for the guys.

I don’t think anyone saw coach Jay leaving, myself included — so it was a little bit of shock. Was I surprised? No, I wasn’t because of the history of the program. I also give a lot of credit to the older guys and to the leaders of this group to say ‘OK we want to put the change and transition behind us and worry about the big picture: winning a championship.’

Two of those leaders were Michael Gamble and Jack Harrison who were just selected in the MLS SuperDraft. Can you talk a little bit about their leadership and how you see them performing in their professional careers?

Michael was one of those who said, ‘OK this is my last year and I want to leave a legacy behind. I want to continue to change the program for the better and get us back to the national elite.’

Jack, obviously a very special talent and team oriented player, was under a lot of pressure and stress as Michael went down with injuries. I was very fortunate as a first year head coach to basically inherit two of the most dynamic players in America. They didn’t just talk about wanting to be pros, they went out and showed it with their work effort everyday, on and off the field.

Can you talk about your goals for next year and for the future, both for the team and for yourself?

We set the bar pretty high, which is both a good thing and a bad thing. I tell people all the time that the goals for the Wake Forest soccer program, no matter if it’s an up year or a down year, is to win a National Championship. I tell our guys all the time that everyday, when I walk in my office, there’s evidence and proof that we can win a national championship if we do things the right way.

I just think the relationships.  If you went to a game this year and saw the way the student body and community embraced this program, it gives you goosebumps. I think every player that I meet with when we do end-of-the-year emails brings up that aspect of the way the community supported this team.

The family — between alumni, the administrators here, academic support, the faculty, the students — it’s just something very unique. It’s a smaller school and very close knit group and it’s something I’ve missed for the years that I’ve been away. Certainly I’ve embraced it again being back.