Russell Wilson speaks out on his lack of protection this season

Wilson criticizes his own team for the number of hits he took, signaling that he, like other NFL athletes, wants a bigger say in personnel-related decisions 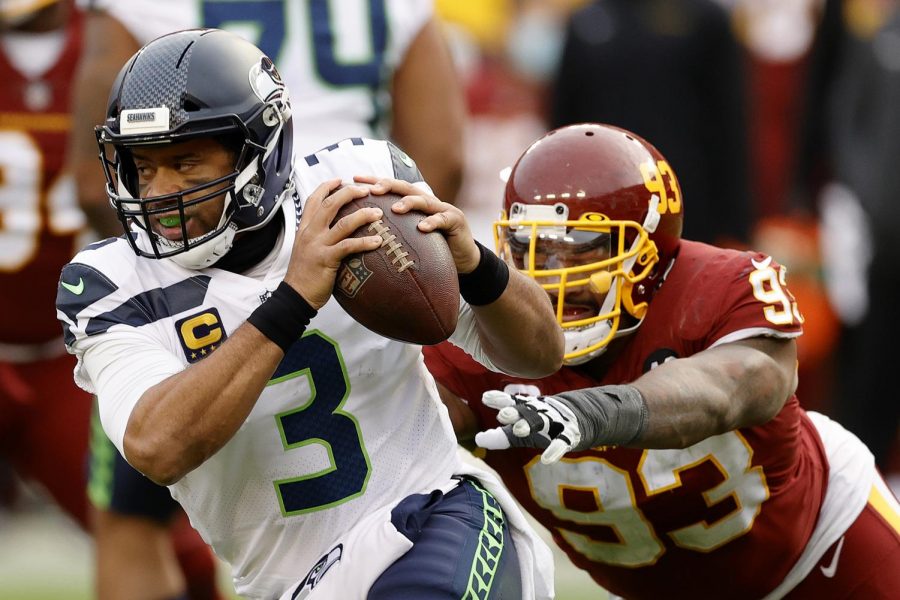 On Feb. 9, Seattle Seahawks star quarterback Russell Wilson gave ESPN commentator Stephen A. Smith something to talk about when reports surfaced that he was “frustrated” with the Seahawks for the lack of protection provided by his offensive line during the past season. Wilson went on to demand that he wanted more input on personnel decisions within the organization.

Following the surfacing of these reports, teams around the league have called the Seahawks inquiring about the availability of Wilson, given his apparent unhappiness with the situation in Seattle. However, the Seahawks have told teams sternly they have no intention of moving Wilson.

If Wilson were traded before the June 1 deadline, the Seahawks would take a $39 million cap hit. Furthermore, Wilson also possesses a no-trade clause, which would allow him to veto any deal he doesn’t approve of. (Wilson is under contract for three more years, he signed a four-year, $140 million extension in April of 2019.)

Dan Patrick, whose radio show Wilson went on to voice his frustration, said that the Seahawks organization is not happy with Wilson speaking out against them and demanding change. According to Patrick, the Seahawks feel as though Wilson has put a burden on the front-office by asking them to make drastic changes in a short amount of time in hopes of calming the QB before he becomes more agitated.

Wilson makes a fair point, though. Only three Seahawks linemen have made the Pro Bowl during Wilson’s nine years in the league. Wilson was drafted by the Seahawks in the third round of the 2012 NFL Draft, and he has been sacked an NFL-high 394 times in his nine seasons since. That is the most sacks taken by a QB in his first nine seasons since the 1970 AFL-NFL merger, when Randall Cuningham was sacked 366 times.

This year, Wilson was sacked 47 times which was the third-most in the NFL behind Carson Wentz (50), and Deshaun Watson (49). In their first-round playoff loss to the LA Rams, Wilson was sacked five more times and pressured on 50% of his dropbacks. The offensive scheme run by Head Coach Pete Carroll features many plays that necessitate longer-developing routes, which also attributes to Wilson’s lack of a clean pocket. Multiple times per game he is forced to escape the pocket as it collapses around him.

The Seahawks only have four draft picks this year, and only one in the first three rounds (second round, pick 56), so picking up a potent talent for their offensive line will be a challenge. Seattle has starting tackles Duane Brown and Brandon Shell under contract for 2021, and left guard Damien Lewis had an impressive rookie year. Guard Mike Iupati and center Ethan Pocic are free agents and unlikely to return to Seattle, according to NFL reports.

As of now, Washington’s Brandon Scherff and New England’s Joe Thuney are the two top free agent guards on the market, but each will likely command a salary close to $14 million per year.  Some of the top free-agent centers — Green Bay’s Cory Linsley, New England’s David Andrews and Atlanta’s Alex Mack — will not be cheap either. As such, Seahawks General Manager John Schneider will have some tough decisions to make.

Unquestionably, the most intriguing part about this NFL offseason has been the multiple quarterback situations developing across the league. Russell Wilson has not been the only quarterback to voice his frustration recently. The Houston Texans have a disgruntled star quarterback of their own in Deshaun Watson, who has made it clear he wants to be traded to a contender.

The willingness of players like Wilson and Watson to go take their complaints public speaks to the player empowerment movement that is taking over the league. Players are recognizing their worth, and have shown that they are unafraid to voice their frustrations if they believe doing so will allow them to get what they want.

No one knows what else this offseason will give us, and which players voice their desires to ‘get out’ next. The situation is intriguing, to say the least, and absolutely worth paying attention to. This may just become the craziest offseason the NFL has ever seen.