Baseball opens their season with promise

Wake Forest won two of three games against Northeastern, including a shutout on Feb. 20 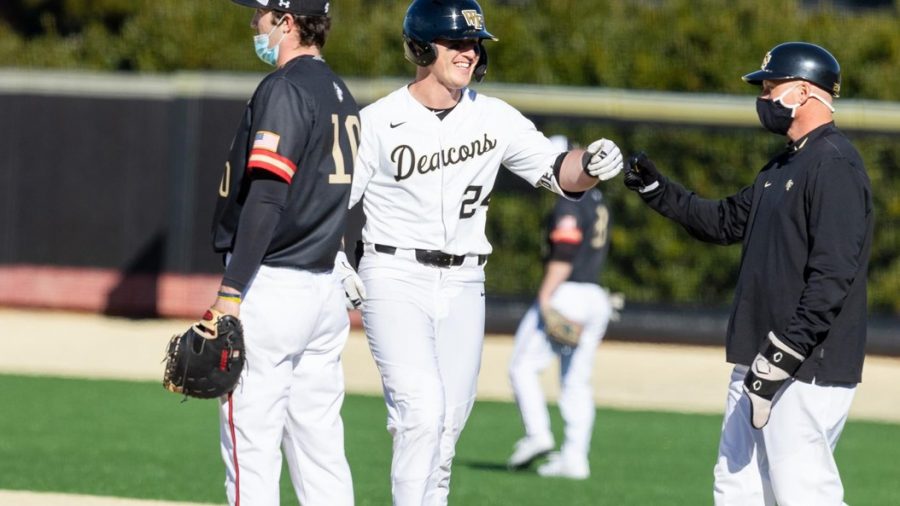 Freshman infielder Brock Wilken hit a two-out, three-run homer in the eighth inning of his collegiate debut to propel No. 17 ranked Wake Forest over Northeastern 8-6. He described it as “the sickest moment of my entire life.”

The Demon Deacons got off to a hot start with a monster 392-foot grand slam by catcher Shane Muntz. Wake Forest’s pitcher Ryan Cusick struck out six of the first ten batters he faced while allowing just one hit. The score was 5-0 in favor of the Deacs entering the fourth inning, and it seemed like they were on track for a dominant opening day game.

In the sixth inning, the Huskies of Northeastern marched back with three unanswered runs. With the Huskies’ outfielder Ben Malgeri on third, infielder Ian Fair sent a ball to center field that brought their first run home. Three batters later, outfielder Jeff Costello doubled to left field, bringing home a pair of runners and making the score 5-3. The momentum remained on the side of the Huskies as they scored a run in the seventh inning and two more in the eighth inning, taking the lead for the first time in the contest. The struggle continued for Wake Forest until sophomore infielder Pierce Bennett got on base with a HBP in the seventh inning, ending a streak of 12 straight runners retired by Northeastern. It wouldn’t matter though.

Wilken stepped up to the plate in the eighth inning with juniors Michael Ludowig and Bobby Seymour on base and came up clutch, sending a ball over the wall as he clenched his fists together and jumped up before trotting around the bases. One can only imagine what was going through the young freshman’s head as he saw the ball head over the fence and out of the David F. Couch Ballpark, clinching the first win of the season for Wake Forest on opening day.

Fleming, Bennett, Seymour and Ludowig lifted the Demon Deacons to a dominant shutout win over the Huskies. The offense continued its fiery dominance, scoring eight runs in the first three innings. The pitching from both veterans and newcomers was also superb.

The Demon Deacons started hot and never looked back. In the first inning, Seymour kicked the scoring off with a one-out RBI single that brought home Bennett. Ludowig stepped up to the plate with the bases loaded and one out, cranking a single and extending the Wake Forest lead to 2-0.

The second inning was much of the same for the Demon Deacons. The bases were loaded once again, and Seymour scorched a ball to center field to drive in another run. Ludowig answered the call again, doubling to left field to drive in two runs. Wake Forest continued to put the pressure on in the third inning, tacking on three more runs. The score was now 8-0 and the Demon Deacons were beginning to pull away.

Keep in mind this game was against Northeastern pitcher Sebastian Keane, who was drafted by the Boston Red Sox during the eleventh round of the 2019 MLB draft, and was the 2019 Perfect Game Massachusetts player of the year. He also set his high school’s all-time career strikeouts record and North Andover’s single-season record for wins. Keene also ended the shortened 2020 COVID-19 campaign No. 23 in the NCAA in wins.

On the other side, pitcher Will Fleming got himself out of a one-out bases-loaded jam in the fourth inning, striking out one and getting a flyout to end the inning. He went six scoreless innings, striking out five while giving up six walks, picking up his first win of the season. The bullpen finished the final three innings with six strikeouts and gave up just two hits.

In a game not lacking excitement, the Huskies prevailed over the Demon Deacons in thrilling fashion.

Unlike the game one day prior, Sunday’s game featured five lead changes and wasn’t decided until the final out. The Northeastern Huskies opened the scoring with a two-out single from third baseman Ian Fair, but Wake Forest pitcher Shane Smith got out of the inning relatively unharmed. Smith came back in the second and struck out the side, redeeming himself.

In the second inning, with Shane Muntz on first base, Wilken crushed a ball to center field that made the score 2-1 in favor of the home team. The Huskies battled back in the top half of the third inning, using a pair of Demon Deacon errors and two singles of their own to capitalize on a trio of runs, pushing the score to 4-2 in favor of the Huskies. Wake Forest would finish the game with five errors, an obstacle tough to overcome.

“I thought our defense was atrocious today,” Coach Tom Walter said after the game.

In the bottom of the fourth, the Demon Deacons applied some pressure with runners on second and third and only one out, but couldn’t bring the aforementioned duo home. In the fifth, Jared Dupree smoked a solo home run into the trees in deep center field, extending the Northeastern lead to 5-2. Michael Turconi followed up his excellent performance Saturday with an RBI single in the fifth to bring Wake Forest back within two. Still, Wake Forest needed a spark to take control of the game.

The sixth inning was one of beauty for the Demon Deacons as they scored six runs and regained the lead off a collection of hits from Costello, Bennett, Turconi and Chris Lanzilli. Just when it seemed as though Wake Forest has secured the lead, the Huskies struck back.

In the seventh, Kyle Peterson hit a single over the head of first baseman Bobby Seymour, bringing two Huskies home and tying the score at 9. With the bases loaded and a new pitcher, Teddy McGraw, in for the Demon Deacons, Scott Holzwasser launched a grand slam to center field breaking the score open and enhancing the Huskies’ lead to 13-9. The Huskies added one more run in the eighth, but the Demon Deacons matched it with a home run to right field by Lanzilli, his third hit of the night, making it 14-10. In the bottom of the ninth, Wake Forest added another run and sent Seymour to the plate with two runners on and the potential to tie the game. He would ultimately ground out, ending the wild game at 14-11 in favor of the Huskies.

“Any time you score 11 runs in a baseball game you should win,” Walter later commented.

Wake Forest looks to build on the strong 2-1 start when they battle Coastal Carolina on Feb. 23 at Couch Ballpark.