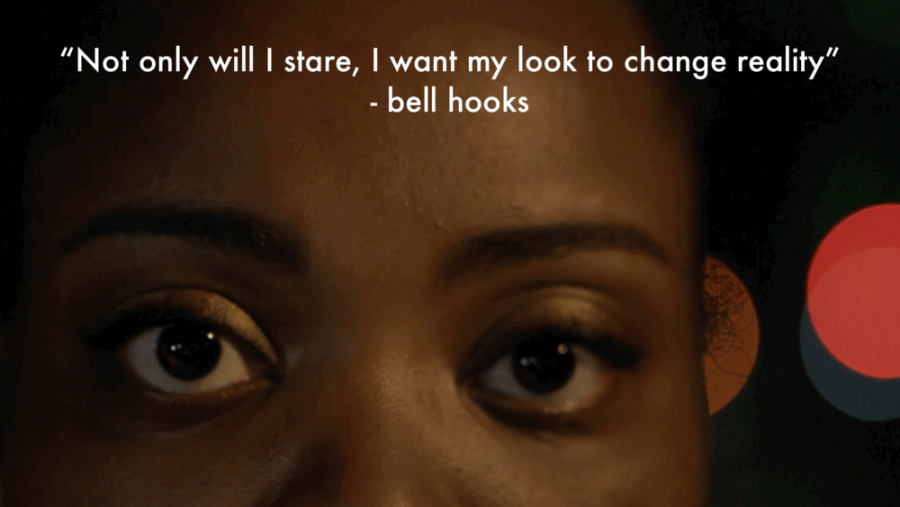 The exhibit includes six short films that explore personal and social identity as the filmmakers reflect on socio-cultural perceptions that they see.

On Feb.14, rentals began for the nationwide virtual film exhibit Our Right to Gaze: Black Film Identities. This 82-minute collection of six short films features creative stories with unique and timely perspectives that let the “filmmakers gaze at themselves and their world, attempting to make sense of what they see reflected back.”  The six showcased shorts are Love in Submission by Antu Yacob and Lande Yoosuf, A Hollywood Party by Toryn Seabrooks, Nowhere by Lin Que Ayoung, The Black Banshee by Kyla Sylvers, Auntie Zariyah by Zora Bikangaga and Pandemic Chronicles by Ya’ke Smith.

Dr. Racquel Gates from the College of Staten Island opens up the collection with remarks about Black film and the underappreciation of short films as a medium. While feature-length films are largely celebrated, they come from a place of privilege where hefty budgets allow for premium production sets and costly cast and crew. With short films, a similar creative expression can be laid out with less exorbitant stipulations. We see these creative forces at work during the film, Love in Submission, which showcases a dialogue between two Muslim women. In a not-so-ordinary conversation, a recruiter for the local mosque approaches an Ethiopian woman who recently arrived in town alongside her husband. Something is off though, and several questions arise from their interaction. Why does this recruiter know so much about this woman? Why does she ask so many questions? Soon the plot reveals a jaw-dropping twist that answers these questions, makes for an entertaining story and might even warrant a re-watch.

Following this lengthy 17-minute short film is a project that clocks-in at around four minutes long, A Hollywood Party. Shifting from the former’s more serious tone, this next film takes a complete 180 as comedy fatefully arranges two relative characters at a night-out party. A very special celebrity is approached by a waitress who just wanted to tell her idol how much she has inspired her.

In a wider narrative on the idolization of celebrities and the starstruck moments of fans, this waitress refuses to take action as a food crumb lands on her bottom lip and faces the challenge of wanting to remove this crumb without embarrassing herself in front of the celebrity. As ridiculous as this sounds, it speaks to how some act when in the presence of those they idolize. Director Seabrooks adds to the comedy of this short film by layering tension with the kinetic and frenzied motions of the cinematography, making the story very entertaining despite its quick run time.

As we progress through the repertoire, Nowhere may seem deceptively slow and boring. It is anything but, with Lin Que Ayoung taking the viewers on a ride of emotional adventures. Through the lens of a middle-aged Latina in the city following an abusive encounter with her husband at home, the woman does not know what to do but to walk around aimlessly until she stumbles upon an odd public encounter between a couple. What happens next is a surprise that deserves careful viewing. What Ayoung was able to do with the story was truly eye-opening, and although it did not wrap up in a fulfilling way, it was a simple, yet captivating story nonetheless.

Among these short films so far, the one that stands out as the most entertaining is Auntie Zariyah by Zora Bikangaga, the fifth piece in the collection. Zach, an aspiring stand-up comedian, consults his father about his upcoming tour stop in Seattle. After learning that he has an aunt in the city, he asks her for a place to stay for the night. Upon walking up to the doorstep, a 12-year-old girl answers the door and reveals to him that she is his auntie. Humorously, the extremely young auntie pampers her nephew Zach with that “Instagram money” that she makes as a social media influencer. She takes him out shopping with her car (that Zach has to drive), gets him a date with a girl and also provides life advice. This film is comical, adorable, heartfelt and radiant with its bright Seattle setting.

The final two films, The Black Banshee by Kyla Sylvers and Pandemic Chronicles by Ya’ke Smith tackle darker themes in the collection with topics such as police brutality and the ongoing coronavirus pandemic. Sylvers’ film takes place in a park where four young adults hang out following a double date at a concert. One of the women, however, has a unique ability that allows her to predict any drama that could unfold if she stays in this location. This ability was hard to really understand at first and required a suspension of belief, but during scenes with police encounters, her power to produce such provocative predictions takes your breath away from the tension that builds throughout this timely narrative.

Pandemic Chronicles, the last film of the bunch, is an anthology of several scenes that are relatable and poignant to the genesis of this pandemic. Socializing, going on dates, finding out test results, assisting friends and seeing quarantined family: all of these are still tough to navigate and this film reflects our current, real-life situation concisely.

Ultimately, these 82 minutes of Our Right to Gaze: Black Film Identities are enjoyable as each film touched on different genres and emotions, while also serving as a great way to celebrate black art during Black History Month. The structure, cinematography and layering of many themes and symbols were never overbearing. Instead, they gave viewers a joy ride through all the earnest work contributed by each creative visionary and their respective crew.

Our Right to Gaze: Black Film Identities, found on fullspectrumfeatures.com, is available to rent for $10 until Feb. 28.