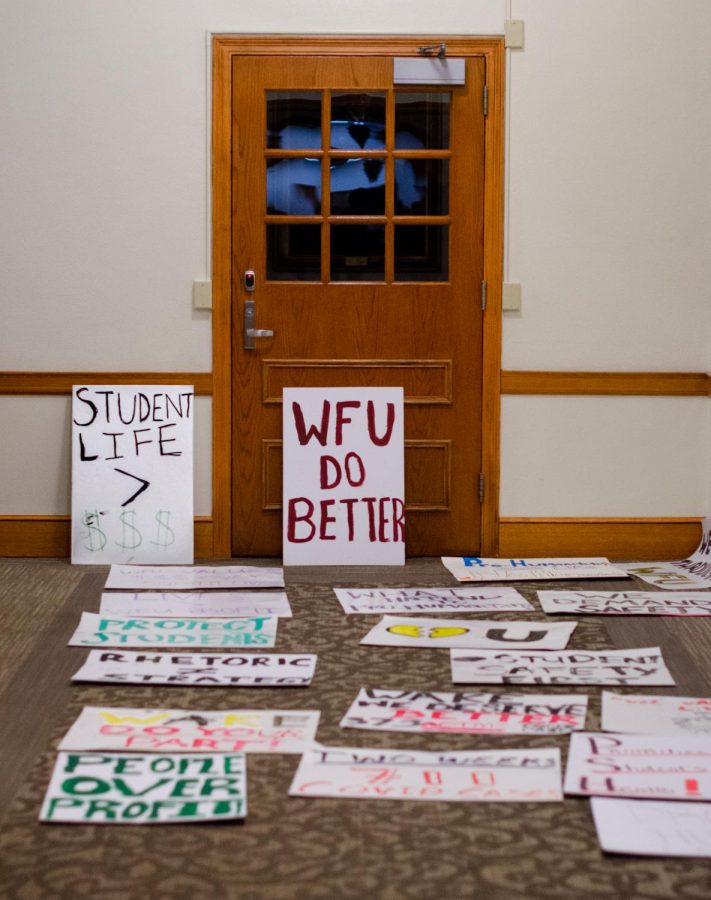 Students leave signs outside of the office of President Nathan O. Hatch to protest perceived poor communication from campus administration on coronavirus-related policies.

Though cases have subsided, the protest highlighted a growing feeling of disconnection between administration, faculty and numerous student groups on campus. Organized mainly by RAs in response to purported miscommunication between the RA community and administration, the protest also seemed to expose a larger shared experience with many other student and faculty groups on campus.

“[The administration] really wasn’t communicating with us about [COVID-19 policies] at all,” said Chidi Ilobachie, a resident advisor in Polo Residence Hall.

Before the protest, RAs and several administrators held a meeting regarding the state of Wake Forest’s COVID-19 positive case count. According to some RAs, the information shared by administrators failed to communicate specific policy changes or how they would be enacted.

“We didn’t really know where any of these policies were coming from,” recalled North Campus Apartments Residential Advisor Shade White. “When it came down to talking about what [policies were] implemented, it was all surface level. It was all about what they were going to do but not how they were actually going to do it.”

Some, like Ilobachie, have observed an improvement in the university’s communication since the protest. That optimism is not shared by all, however.

While there have been reported improvements from the RA community in terms of communication and consideration, the letter the protestors wrote to administrators was ultimately never directly addressed by university administration. Rue Cooper, a residential advisor and co-organizer of the protest, wants to see further transparency from the university.

“The administration will never directly address student concerns. It just becomes part of general conversation. It would be nice if they would give us a transparent response, even if it’s out of their control,” Cooper said.

Though RAs were a major force in organizing the protest, other campus groups have noted inconsistent communication from administration officials. Students involved in the Greek life community, for instance, received an email from President Nathan Hatch regarding their responsibility for the increased case counts. According to the email, over 90% of COVID-19 cases at the time came as a result of Greek-related events. However, only members of Greek life received the email, meaning other students and faculty members received that information second-hand.

“I would like to see the school’s policies regarding COVID-19 regulations be a little less ambiguous and [more] easily accessible,” said Emily Conway, president of the Panhellenic Council. “Sometimes it seems like navigating the Our Way Forward website is a bit overwhelming.”

As some students believe transparent communication is still elusive, the university looks to a possible shift to Yellow status. Yet, as case numbers continue to fall, the protest serves as a reminder from the student community that future policy changes must be more transparent.