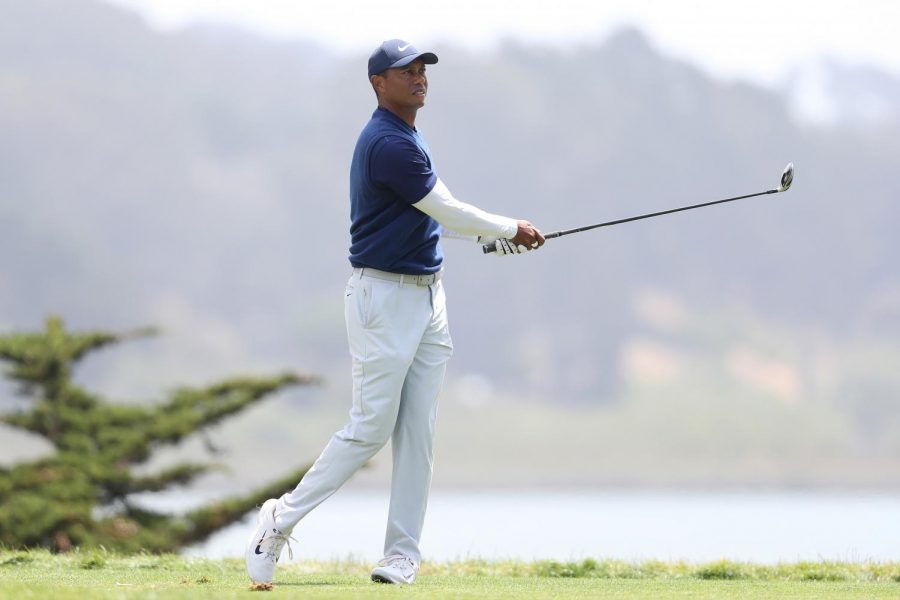 Woods watches his shot at the PGA Championship at TPC Harding in 2020. He will likely be unable to compete in the 2021 edition of the tournament.

On Tuesday, Feb 23, Tiger Woods was involved in a one-car accident in Los Angeles while on his way to a video shoot with Golf Digest at Rolling Hills Country Club. At 7:12 a.m. PST, Woods’ 2021 Genesis GV80 SUV veered onto the wrong side of the road and crashed into a nearby hillside. Woods was the only person in the car when the accident occurred.

LA County Sheriff’s Department Deputy Carlos Gonzalez was the first to arrive on the scene. “It’s very fortunate that Mr. Woods was able to come out of this alive,”  Gonzalez said.

The interior of the car remained intact and the LACSD confirmed that Woods was wearing his seatbelt when the crash occurred. The seatbelt and the deployment of the airbags were essential in preventing the accident from being fatal.

Gonzalez and other first responders reported that Woods showed no signs of impairment and was “calm and lucid” when the authorities arrived. The LACSD is treating the crash as an accident and is not considering any charges against Woods.

Per Golf Digest, the golfer suffered “comminuted open fractures to the upper and lower portions of his tibia and fibula in his right leg, as well as damage to the ankle bones and trauma to the muscle and soft tissue of the leg.”

After the crash, Woods was rushed to Harbor-UCLA Medical Center, where he spent most of the day in major surgery. As reported by Golf Digest, “Woods’ right leg was stabilized by inserting a rod into the tibia. Screws and pins were used to stabilize the bones in the foot and ankle.”

Considering the long, intensive surgeries that Woods underwent, it is doubtful that he tees it up on TV anytime soon. This is obviously devastating for golf fans, who were looking forward to seeing Woods make his return to golf in April at the Masters. While many were saddened that Woods would have to spend an even longer time away from professional golf, others have spoken out and said that this should be the least of our concerns.

Four-time major winner and Woods’ friend Rory McIlroy emphasized this message. “At this stage, I think everyone should just be grateful that he’s here, that he’s alive, that his kids haven’t lost their dad,” he said. “That’s the most important thing. Golf is so far from the equation right now, it’s not even on the map at this point.”

McIlroy’s insights were a good reminder that Tiger Woods is so much more than just a golfer.

Support for Woods has continued to flood in since last Tuesday. Former president Barack Obama, Serena Williams, Jack Nicklaus, Alex Rodriguez and many more extended their prayers to the Woods family.

On Sunday, Woods acknowledged the outpour of love and support.

“It is hard to explain how touching today was when I turned on the TV and saw the red shirts,” Woods said. “To every golfer and every fan, you are truly helping me get through this tough time.”