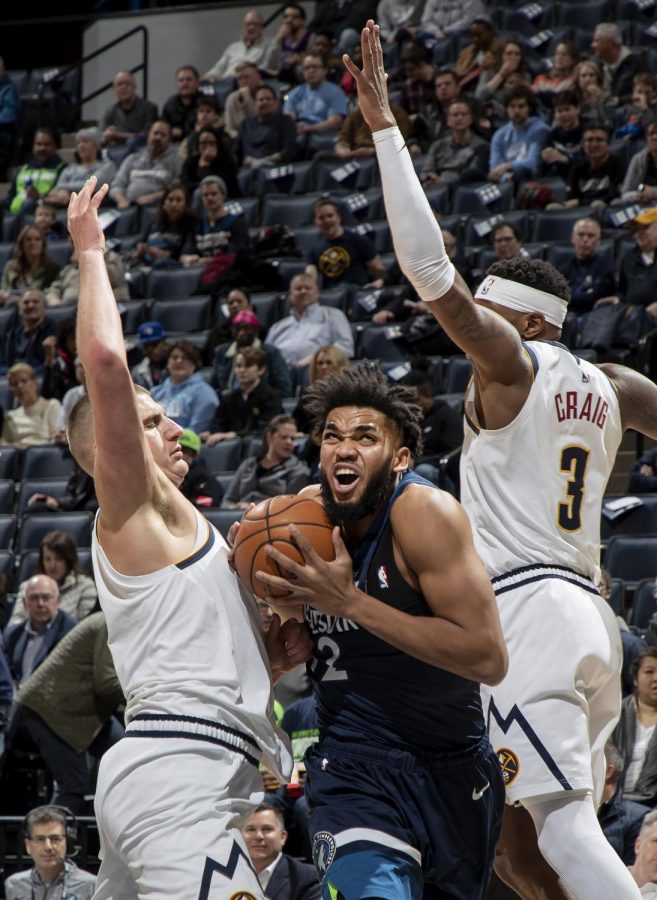 Towns fights through contact for a shot against the Denver Nuggets.

Ryan Saunders, the son of the late owner of the Minnesota Timberwolves, Flip Saunders, got his first job as an NBA coach in Washington, D.C. as an assistant coach with the Wizards in 2009. He coached there for six years before taking the same position in Minnesota. After former head coach Tom Thibodeau was fired in 2019, he took over as the interim head coach and became the head coach the following season.

At the time, Saunders was the youngest head coach in the entire league at 33 years old. During his tenure as head coach, the Timberwolves went 43-94, finishing with the third-worst record in the league during that time. They won the draft lottery, and selected Anthony Edwards, an athletic forward out of the University of Georgia.

Toronto Raptors assistant coach Chris Finch became the new head coach of the Minnesota Timberwolves on Feb. 21 when former head coach Ryan Saunders was fired after starting the season a league-worst 7-24, and having one of the worst-rated offenses in the league. Finch was in his first season with the Raptors. He spent the last three seasons with the New Orleans Pelicans and was coaching overseas before accepting a job as a head coach in the G-League for the Rio Grande Valley Vipers in 2009. In his first season as a Vipers coach, the team went 34-16, which was good for first place in their conference, and earned the team their first-ever playoff berth. They eventually won the G-League championship. Following that successful season, he received G-League Coach of the Year honors.

Finch has bounced around the NBA as an elite assistant coach for several teams. He had stops with the Houston Rockets, the Denver Nuggets and the New Orleans Pelicans before finally being hired by the Raptors this past offseason. He is known for playing a significant role in developing multiple NBA stars, including Nuggets star big-man Nikola Jokic. He also played a role in developing the big-men tandem of Anthony Davis and Demarcus Cousins in New Orleans. He is considered by other coaches around the league to be an offensive mastermind and has played a massive role in the big jump the Raptors offense took this season. Through 31 games this season, the Raptors saw their half-court offense improve from No. 16 in the NBA, to being in the top ten.

The Timberwolves have some young talent, with recently drafted No. 1 pick Anthony Edwards, guard D’Angelo Russell and big man Karl-Anthony Towns leading the way. Despite these pieces, they have the worst record in the NBA at 7-28 and are currently on an eight-game losing streak. Injuries have hindered Towns and Russell. They have only played nine games together in the last two years and haven’t been able to form the on-court chemistry that so many duos in the NBA have.

So far, the Timberwolves offense is ranked No. 28 in the league this season, scoring just 105.7 points per 100 possessions. Malik Beasley, one of the premier scorers on the team averaging close to 17 points a game, was just suspended for 12 games for off-the-court issues.

Finch has his work cut out for him, and it will not be easy to turn one of the worst teams in the NBA into a Western Conference contender. Perhaps Russell and Towns will get healthy and the Timberwolves will make a run for the playoffs in April. Only time will tell.