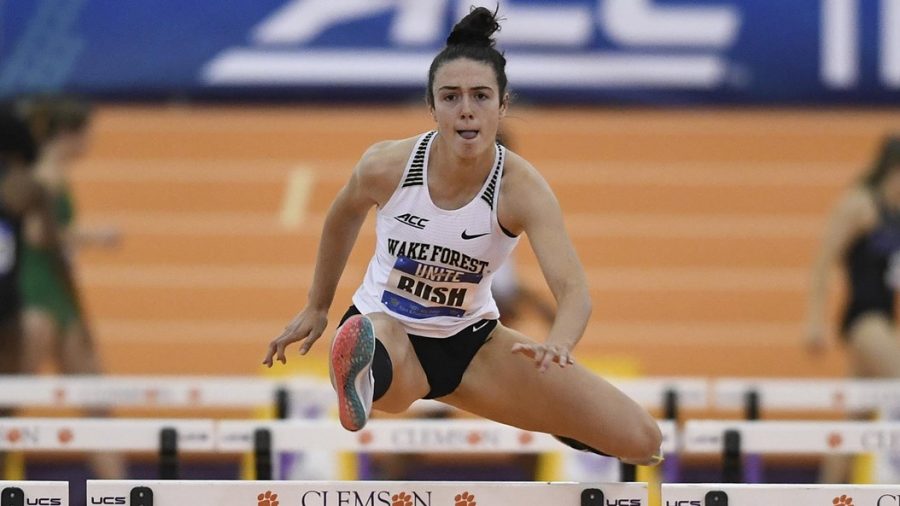 Bush competing on Day 2 of the ACC Indoor Championships.

Junior Tony Jones and redshirt junior Anna Bush made the Wake Forest community proud as they each captured individual championships for their respective events at the ACC Track & Field Championships. Jones earned his honors in the high jump competition on Feb. 25, replicating his personal record of 2.16 meters en route to the victory. Bush’s title came via the pentathlon on Feb. 26, during which she notched 4,121 points, resulting in a top-five rank in the entire NCAA and a new personal best. It was a historic achievement for the two Demon Deacons, as it had been 14 years since Wake Forest had seen two of its student-athletes come away with individual indoor track & field conference titles.

The journeys of Bush and Jones to the top of the ACC were marked by perseverance, dedication and no shortage of adversity. For Bush, injuries have cost her an entire year of her collegiate career to date. As such, she was forced to spend significant time recovering rather than competing the way she wanted. She was bogged down by stress fractures during her freshman year at Wake Forest, and she suffered an unfortunate injury at the ACC championship meet the following season. Now, however, she couldn’t be more grateful to be back on the active roster where she belongs.

“I’ve had quite a lot of injuries,” Bush said. “I missed my whole first year … sitting on the sidelines was pretty hard. I think that makes it even more important for me to be able to go out and compete for Wake.”

Bush’s confidence in herself never wavered, and the moment she finally snagged that elusive ACC title made all the trials and tribulations worthwhile.

“I knew I could do it,” Bush said. “The doing it was something else. It turned into a bit of disbelief that I’d actually been able to do it, [that] it wasn’t a dream. It was quite exciting.”

That said, Bush isn’t ready to stop now. With the NCAA championships looming on the horizon, she has her sights set on making a name for herself there by building off her accomplishments at the ACC Championships.

“I have a lot more in me,” she said. “I’m getting better in each of the events. I’m excited to see how we do.”

Jones’ route to ACC stardom, though different from Bush’s, proved equally as circuitous. Though he didn’t immediately thrive at Wake Forest, he’s incredibly grateful for the opportunities to compete provided to him by the university.

“When I got to Wake Forest, it was trying to learn everything new, which was weird,” Jones said. “Sophomore year, things started to pick up, and then this year I got a lot stronger and a lot more mentally prepared for the meets. It feels good to be able to bring [back] an ACC Championship representing Wake Forest.”

One of the most gratifying moments of the entire ACC championship experience for Jones was witnessing the reactions of his teammates after he’d secured his high jump victory. Even in a year where COVID-19 restrictions put a limit on how many of his teammates could interact with him at one time, Jones still felt the love from everyone around him.

“They had more excitement than I did,” Jones said with a laugh. “When I got back to the tent, the select few that were in there just came up to me and gave me hugs and told me that they were proud of me.”

Like Bush, Jones has his gaze firmly trained on the future and the competitions that remain ahead of him.

“[I’m] just trying to get better overall,” he said. “[One of] my goals this season is to be able to make NCAAs at Oregon. I just like to take it day by day and get better each and every day.”