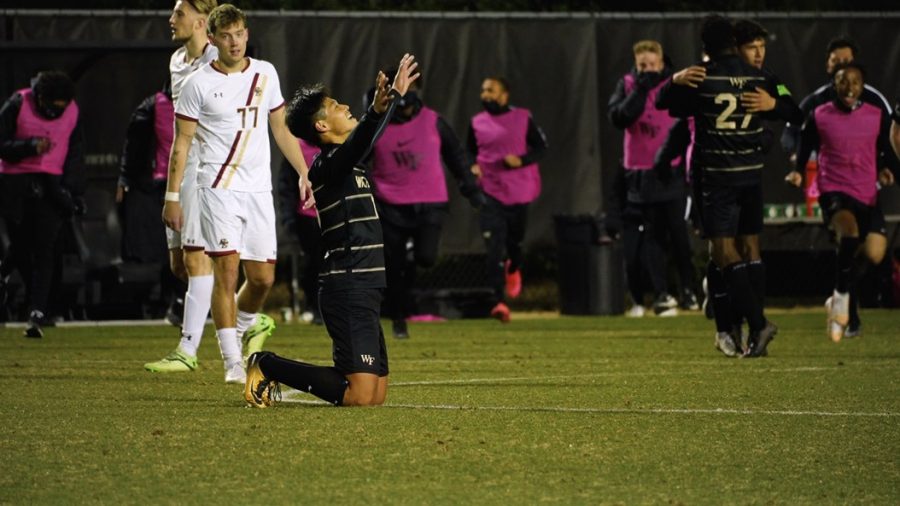 Freshman Hosei Kajima falls to his knees in relief at the final whistle.

In soccer, when a team is down 2-1 with five minutes left, the game is typically considered over. The Wake Forest men’s team disproved this notion on Saturday night when freshman Hosei Kijima scored two goals in the last five minutes of the game to bring the Deacons back from behind and beat Boston College.

When asked about his team’s performance on Saturday, Head Coach Bobby Muuss said, “Performance and result are two separate things. I don’t think we performed well, but we got a really, really gutsy result, so I’m extremely proud. The performance — we got a lot to work on.”

Following the game, Muuss stated how proud he was of his team for adjusting to so much adversity early on in the season.

“This is a brand new team and I think that’s what people don’t realize,” Muuss said. “We lost ten players from the fall, we lost two guys to injury last week [and] we lost another one today. We’re just grinding out wins in the best soccer conference in the country with a brand new team. That makes it even better.”

Wake Forest beat Davidson 1-0 on March 1 at Spry Stadium for their first win of the season against a non-conference team. Because this game against Boston College was the Demon Deacons’ first ACC game of the season, the team was itching for a win. Redshirt sophomore Jake Swallen started off the scoring with a goal in the ninth minute. Junior Holland Rula assisted the midfielder’s goal with a pass from outside the box.

“It definitely was a confidence-booster [to get] a goal so early in the match,” Swallen said. “It was a good ball, and I just kind of opened up and struck it through two guys. Honestly, I didn’t even see it go in. I was really surprised, everybody just screamed.”

The Deacs held onto the lead until the final five minutes of the first half, when Boston College got on the board with their first goal of the match, beating goalkeeper Cole McNally on a free kick. At halftime, the teams went to their locker rooms tied at 1-1.

Unfortunately for the Deacs, Boston College scored again inside the box in the 48th minute of the match. The crowd was beginning to lose spirit as the second half clock wound down. With just over half an hour left in the game, sophomore forward David Wrona received a yellow card. Wrona tallied four shots, one of which was on goal, and had some of the Deacons’ best chances of the night, but was not able to finish.

Some controversial calls from the referees also contributed to some apprehension from fans and players. At one point, players from both teams engaged in a shoving match that had to be broken up by teammates.

A near goal by Wrona in the 73rd minute seemed to be the last chance the Deacs would get on the night. Wake Forest was repeatedly unable to capitalize on free kicks and a couple of breakaway opportunities. Then, in the 85th minute, the Deacs were given a free kick. After much anticipation, Kijima was able to get a goal off a deflection from outside the box. The crowd celebrated, though many assumed the game would end in a tie.

When asked what he thought of his first goal, Kijima said, “All week I’ve been running in the box, hitting nice volleys during training, and I just knew it was coming. The moment the ball went up, that was the result. Hard work pays off.”

But Kijima didn’t stop there. In the 89th minute, he got a pass from Wrona and sent a low shot into the goal. Kijima and his teammates charged towards the bleachers and jumped on the ledge. Fans surrounded the players and the excitement in the crowd and on the field was palpable.

“David [Wrona] fed me a beautiful ball, and everybody was shifting to the right, so I just slotted in through the left side of the goal. It was a good goal, a lucky goal,” Kijima said.

Kijima might have chalked it up to luck, but his first two goals for Wake Forest were certainly well-deserved. McNally praised his teammate saying, “[Kijima] is probably one of the hardest workers I’ve ever seen in my entire life, and he earned those two goals tonight.”

McNally gave up two goals, but his ability to refocus and tighten up the back-line helped his team win. When asked how the Deacs stayed in the game, he said, “Obviously, it’s tough when you’re down a goal late. Two-to-one is a tough score to deal with, but I gotta give all credit to the guys in front. This shows the heart that they have — each and every one of them.”

Offering praise to his teammates, “They didn’t put their heads down when that second goal got scored,” he said. “Everybody was up, we were ready to try to finish out the game … that’s what makes this team so special.”

On the topic of the team’s strengths and weaknesses, Coach Muuss said, “I thought on transition we were okay. Defensively and attacking, I thought we got behind the ball well. But our compactness defensively needs to get better, our press needs to be better, and we need to keep the ball for longer periods of time.”

He continued, “We need to impose our game on our opponents a little bit more and not let them impose their’s on us.”

When asked how it feels to start the season with two wins, Coach Muuss said, “It’s awesome … to start ACC play with a win is huge. Especially when you’re down 2-1 with eight minutes left. That’s the best part of this one, just the dramatic part of it, the excitement level that went into it.”

The Deacs will have an opportunity to show what areas they improved upon when they face NC State at Spry Stadium on March 13.