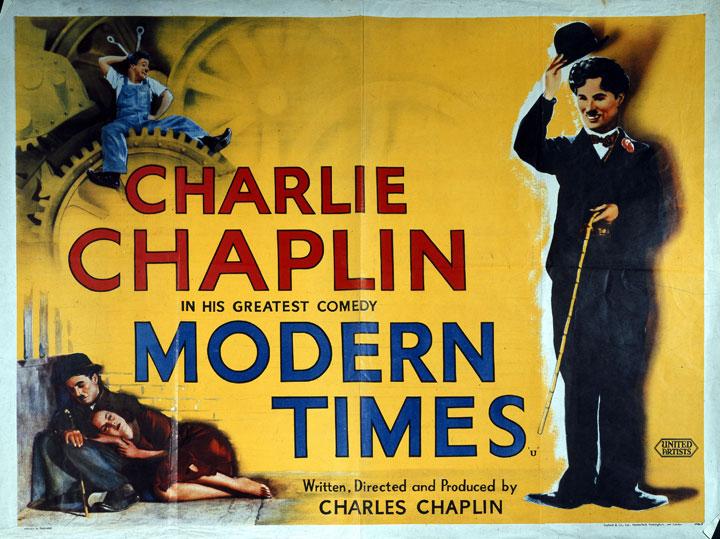 Modern Times, which Charlie Chaplin wrote, directed, produced, composed, and starred in, is one of the actor’s most notable films.

The story takes place in the midst of the Great Depression, a setting the central characters experience as they find themselves within the misfortunes of the era.

Poverty, hunger, and isolation are all aspects of the era that these characters embody.

Ironically though, the film is a comedy, which certainly juxtaposes the predicament of Chaplin’s character, simply known as a Factory Worker, and his companion, known as The Gamin. The humorous tone allows the characters to act in unpredictable, quirky ways that would never actually happen in real life. Because of this, audiences must suspend reality upon watching the film for it reverses that modern, realistic form that many films encompass today.

Despite the desperation and pessimism that is commonly associated with the Depression, the film portrays the two main characters with empathy and humanity; they are seeking a companion so that when they experience misfortune, they will not experience it alone.

We are first introduced to The Gamin when she is stealing bananas. She has no job or means to get by, but when she meets Chaplin’s character, her world becomes a little easier to endure.

One of the most poignant scenes is when the two find a dilapidated house to live in. The roof needs to be held up by a broom and the lake that appears to a fun swimming area is incredibly shallow. Despite this, The Gamin refers to the home as “paradise” and the two make the most of it.

“Buck up – never say die. We’ll get along” – a factory worker

Throughout the film, we find The Gamin and the Factory Worker in various odd jobs and situations that never seem to work out the way they want them to. Because of this, by the end of the plot, they are back where they started. They have no home or money, and their future is uncertain.

The Gamin is discouraged and does not exhibit much hope for herself or her companion. The Factory Worker on the other hand, attempts to cheer her up by promising her that they will find a way to make do. Of course, it is hard to determine whether or not the Factory Worker believes his words or if he is merely trying to cheer his melancholic friend up.

Either way, his character has exhibited a lightheartedness that has allowed The Gamin, as well as the audience, to be a little more hopeful and not take the unfortunate series of events so seriously. The Factory Worker is ultimately trying to perceive life less negatively, because if he were to do this, then he would not be able to enjoy living.

The final scene of Modern Times is by far one of the most iconic in cinematic history. In regard to its significance to cinema as a whole, it signifies the decline of the silent film era as film fully transitioned into the talkies.

In regard to The Gamin and the Factory Worker, their fate is ambiguous. From an objective, realistic standpoint, the couple’s fate is most likely grim. Though from a more abstract perspective that takes into account the tone of the film, the Factory Worker and The Gamin will find themselves in another adventure soon enough.