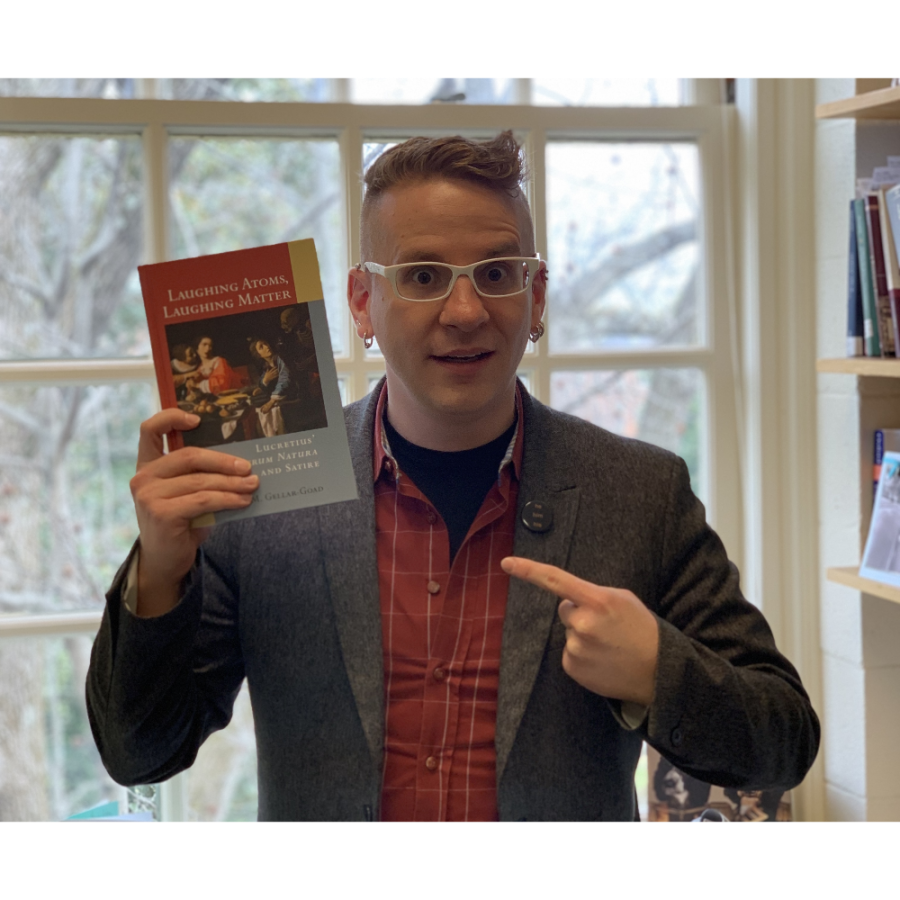 T. H. M. Gellar-Goad is an Associate Professor of Classics and Zachary T. Smith Fellow. He is a co-organizer of the Classics Beyond Whiteness program, which seeks to decolonize the Classics Department. He will be taking a sabbatical in the fall to work on a book about religion in ancient Greek and Roman comedies. He earned his Ph.D. in classics from the University of North Carolina at Chapel Hill.

What was it that first drew you to studying classics and what do you think students can gain from the discipline?

I took Latin in my first year of college because I was interested in classical music, specifically Verdi’s “Requiem Mass.” I liked Latin, so I took more of it, and I had professors who supported me through independent studies and classes at a neighboring university that had more Latin classes than UNC did. I grew up with that early millennial thing of parents saying that you can do whatever you want, so long as you dream and you work hard. That, combined with the privilege that I had as a middle-class white [man] and a lot of luck, meant that I was able to pursue classics successfully as a career.

Classics, like any study of culture, offers an opportunity to see things from different perspectives, ask enduring questions about society and what it is to be human, engage with issues of oppression and resistance and explore ways of thinking that are different from one’s own. Classics isn’t unique in that way — you can gain this kind of understanding from studying culture with a critical, academic approach — but classics is a discipline that has a lot of interesting work happening now. That’s something that I think Wake Forest is really strong in: having a variety of perspectives and asking tough questions of ourselves and of the history of the discipline.

Can you talk about the Classics Beyond Whiteness program?

Classics Beyond Whiteness is a series of curricular and co-curricular events. It started in the fall of 2019 with a course with that title that I taught, but there was also all sorts of programming — guest lectures, book groups and an exhibit of new public art commissioned by local artists. The goal of the program is to decenter the whiteness of our field. Classics, as a discipline, is bound up in the history of centering whiteness and this false idea of “Western civilization,” which I and other scholars in my field believe is a damaging white-supremacist concept. This has been a growing matter of discussion in my field for the past five or ten years.

In response, we organized this series of events to try and put non-white classicists in the spotlight. I think one of our signature achievements has been commissioning three paintings of Black classicists with ties to North Carolina. Each of these scholars had never had portraits done before. The portraits were done by a local artist, Leo Rucker, and they bring new attention and honor to classicists who often have been written out of the history of the field. We’re really excited about the portraits and we’re working on getting them installed in Tribble Hall.

The second goal of Classics Beyond Whiteness was to discuss the role of classics in white supremacy. You can think about this with the insurrection on Jan. 6th: there was someone dressed up in Roman garb, people wearing laurel wreaths like Julius Caesar used to wear and appeals to Athens and Sparta. All of these show how classics have been weaponized for white supremacy.

The third goal of our series was to look at race and ethnicity in the ancient world. Often, when we’re looking at the past, the default way to think about it is as a raceless society. This is not true. Every society constructs race in some way or another.

I taught the course Classics Beyond Whiteness for the first time in the fall of 2019. I assumed it’d only get ten or 15 signups because it didn’t fulfill any requirements. We ended up with almost 30 students — as many people as I could cram into Tribble A303. It was a really exciting, busy and talkative group, and I thought we learned a lot together. Then, this summer, after the protests over the police killings of Black people, my department decided to make sure that all of our students study race in the ancient world using Critical Race Theory. Classics Beyond Whiteness is now a permanently offered course and it will be required of every classics major or minor.

Are there other social justice-related changes happening in the department?

Definitely. First off, the department has requested approval from the Office of the Dean of the College to hire a faculty member whose specialty is race and classics. Whether or not that is approved is up to the Dean. If they say no this year, we’ll ask again next year and every year until it’s approved because that’s how important we think it is. Additionally, our department has people who have been trained through the DEAC Allies Program, and we have adopted a policy of providing additional support for faculty of color, who often provide advising and other support structures for students of color. We’ve issued statements of solidarity and support for the Anti-Racism Coalition of student organizers and Black Lives Matter, too.

In May 2022, we’re hosting the quadrennial Feminism in Classics conference, which is an international conference. This will be the eighth iteration of the conference and we’re slated to be the most inclusive and equitable conference yet.

We also have faculty who are affiliated with the Women, Gender and Sexuality Studies department, and Amy Lather and I co-teach a course on women, gender and sexuality in antiquity pretty regularly. On top of all that we have reading groups, book groups and guest lectures related to feminism and social justice.

How will you be spending your sabbatical?

Basically, I’ll be working on my next book, which is a study of religion in ancient Greek and Roman comedy. These comedies are one of the earliest kinds of sitcoms. They’re not necessarily as funny to modern readers, but they have a lot in common with domestic family dramas. There’s never been a systematic study of how religion is used in these comedies, and my book argues that religion is a much more fundamentally important part of these comedies than has been previously recognized. Reading these comedies gives you unparalleled access to the daily experience of religion for ancient Greeks and Romans in a way that you don’t get from monuments, temples, artwork or big, fancy poems.