After his gruesome injury in 2020, the Cowboys showed faith in Prescott with a new contract 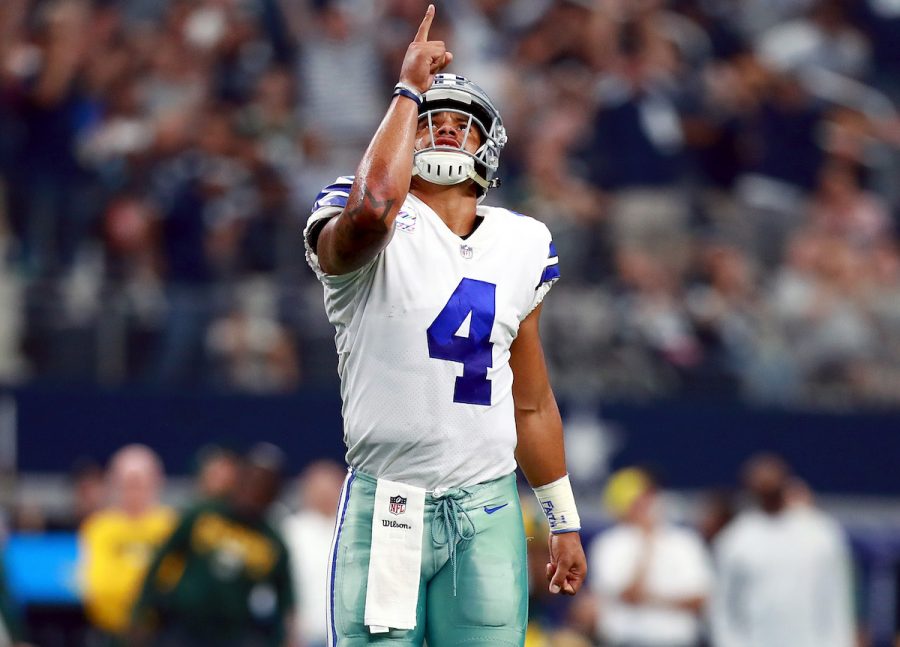 Prescott got what he was looking for with a four-year deal.

The biggest off-season drama of the NFL is over. No more hastily made jersey-swap edits on Twitter, no videos of dumb fans burning their $129 jersey, and the talking heads can finally move on to other speculations. Texas, put your mask back on and let out a deep sigh of relief. Your star quarterback is staying put.

On March 8, the Dallas Cowboys announced that they had reached an agreement with Dak Prescott to retain him as their starting quarterback. The four-year, $160 million contract comes after many years of speculation and negotiation disputes. The 2016 fourth-round draft pick’s rookie contract ended after the 2019 NFL season with no fifth-year option available. Prescott was then franchise tagged, meaning he and the Cowboys would have the 2020 season to continue long-term negotiations, during the upcoming season, Prescott would play at just below market value, earning about $31.4 million.

Prescott played in the first five games of last season before suffering a gruesome season-ending ankle injury against the New York Giants. Despite missing the majority of the season, Prescott still had more passing touchdowns than Cam Newton had in 15 games (nine to eight) and only 300 fewer passing yards than his replacement, Andy Dalton did in 11 games. During the Mississippi State gunslinger’s tenure, the Cowboys have gone 42-27 with two playoff appearances. After Prescott’s injury, Dallas went a dismal 3-7, and their overall offensive production declined.

Before the 2019 season, reports revealed that Prescott wanted a long-term deal with the Cowboys. Rumors that he was searching for a four-year contract and nothing less than $40 million per year began circulating on Twitter and in team facilities. A source from Pro Football Talk shot the speculation down a week later, but if you do the math on Prescott’s current contract, he is being paid an average of exactly $40 million a year.

Prescott’s agent Todd France negotiated the most guaranteed-at-signing bonus in NFL history, landing just shy of nine figures at $95 million. Additionally, Prescott is guaranteed $31 million more, placing him at $126 million guaranteed, second only to Patrick Mahomes. Critics say that Prescott has not proven himself enough to earn such sums. Jerry Jones responded, probably while rubbing his money between his fingers.

“Most anything that I’ve ever been involved in that ended up being special, I overpaid for,” he said.

Per Pro Football Talk, Prescott was also franchise-tagged on March 9. According to France, this is what both he and Prescott wanted, as it would force the franchise to pay a 44% increase on his contract should they tag the QB a third time. This would be unlikely, as Prescott’s new contract is set to have a no-trade clause and a no-tag clause, thus preventing that third tag from occurring.

While a third tag would result in a hefty payday for Prescott, franchise tags are a source of contempt around the league. Dallas initially franchise-tagged their “franchise quarterback” on March 16 of 2020, but Prescott did not sign the $31.4 million agreement until June 22, following a holdout of nearly three months. Athletes typically hold off signings when they are not pleased with the current offer and threaten to sit out until their desires, whether that be a long-term deal, an increased salary or a new team (as in the case of Deshaun Watson) are met. And, more often than not, the franchise is the party in the losing position as the athlete continues training away from the rest of the team while the team is essentially paying for said athlete to not show up.

Sometimes using the tag as a negotiation extension works successfully, as seen by the Derrick Henry case in 2020. Many players view the tag as a salary limitation and a cap on their ability to play for a team that wants them long-term. Current Minnesota Vikings quarterback Kirk Cousins played his last two seasons in Washington D.C. under consecutive tags, but unlike Prescott, he could not repair relations with the franchise. Cousins signed a fully guaranteed two-year extension with the Vikings in 2020, bringing his guaranteed money total to $150 million.

But now, Prescott does not have to worry about another franchise tag in the immediate future. He got his deal and Dallas has their quarterback of the future back in blue and white. The only thing left to do: win the Super Bowl.