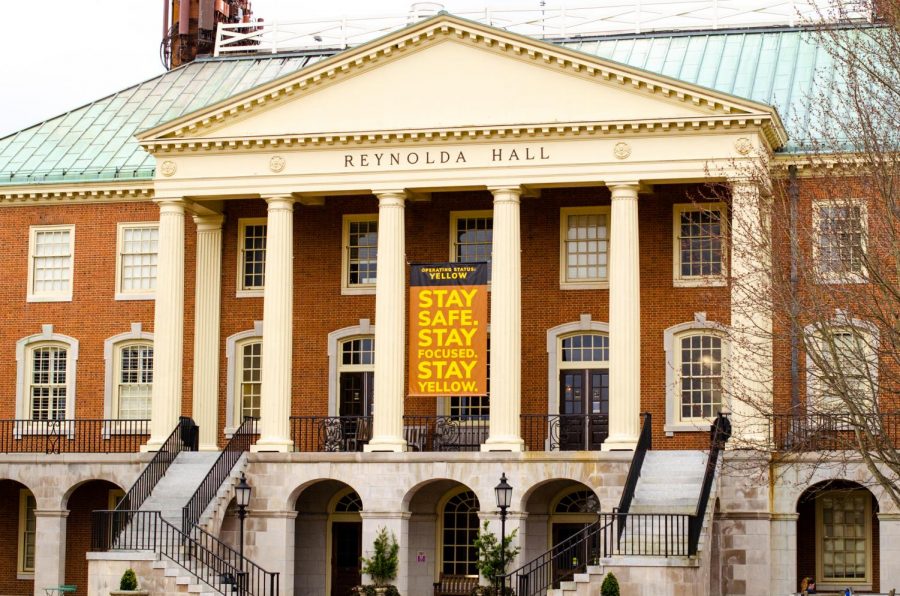 Wake Forest has transitioned to Yellow with even looser restrictions present than in the fall, in part due to better information about viral spread.

On March 12, the bright orange banners that had been hanging on campus since the beginning of the semester were replaced with a muted yellow ones.

While the new banners are certainly less eye-catching than the old ones, they were a welcome change as they signaled Wake Forest University’s move to Yellow operating status. The change signals the resumption of many in-person activities and events halted by Modified Orange status, which was put in place after the spike in cases in early February.

Before the transition to Yellow, a few restrictions were lifted, such as the reopening of ZSR, Reynolds Gym and indoor dining. However, the university officially changed the majority of restrictions on Friday.

While the current Yellow operating status closely resembles the Yellow status of the Fall 2020 semester, there are a few noticeable differences. Per Dr. Penny Rue, Vice President for Campus Life, the changes are due to the fact that the university is more informed now about the nature of the virus.

Working in close consultation with experts and using the most recent data and research, the administration is attempting to ensure that students are staying safe while allowing many activities to resume in person.

One example of this is the new off-campus transportation policy, outlined in the university’s official statement released March 5, which allows student organizations to plan off-campus trips, as long as they still adhere to all of the safety guidelines in place on campus.

Of the groups taking advantage of this policy change, Outdoor Pursuits is perhaps the most noticeable. Since their official return with the move to Yellow, they have already led hiking and climbing trips, and the organization has two more planned for this coming weekend, including a horseback riding venture this Saturday.

Another change welcomed by students was the reopening of the basketball and sand volleyball courts. Not only are they available for students to use with friends, but their reopening marks the return of intramural and club sports. In addition to sand volleyball, there is also 3 v 3 basketball, modified flag football, co-ed soccer and more scheduled for the coming weeks.

While these guidelines may seem less cautious than those under Yellow status in the fall, Rue has worked with the university to make campus as safe as possible.

“Each club sport has submitted a safety plan,” Rue said. “They are practicing with constraints [which vary] depending on the nature of the sport.”

The same is true for intramural sports, and the school is ensuring social distancing and mask-wearing are enforced throughout practices and games. With an increase of vaccinations being administered, some students wonder if campus will enter Green operating status or even return to something resembling pre-pandemic Wake Forest. However, Dr. Rue believes this to be unlikely in the near future.

“I could imagine as we reach herd immunity, [which is around a 70% vaccination] rate, we could consider lifting additional restrictions,” Rue said.

Until then, the university will likely remain in Yellow operating status. With this in mind, as we look towards the remainder of the semester, she reminds students that we can return to Orange at any point.

“The guidelines [of what will return the campus to Orange Operating Status] haven’t changed. It is up to you all,” she said of the student body. “You know what works and what doesn’t work. If you’re gathering socially unmasked, then we’re going to have another surge. Be smart and think about each other. All students get the same sanctions when a surge hits, even those that have played by all the rules. Think about each other.”