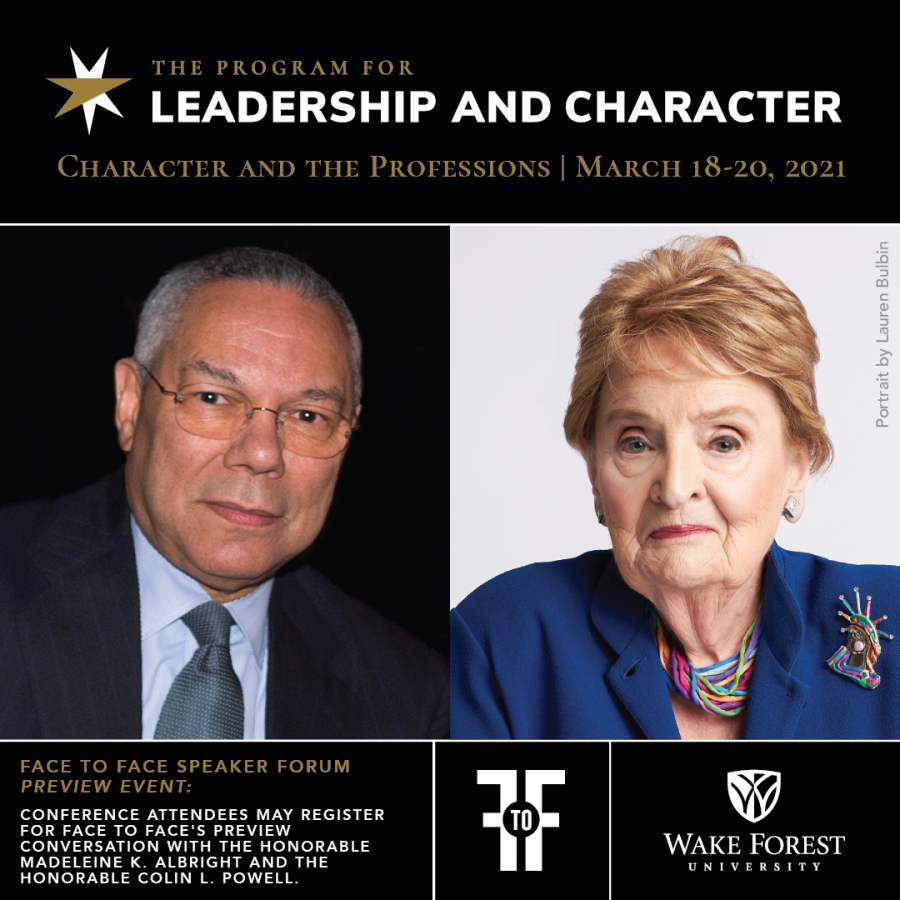 Former Secretaries of State Madeline Albright and Colin Powell will give the keynote address tonight at a conference held by the Program for Leadership and Character at Wake Forest.

The conference, officially titled Character and the Professions, will run from March 18-20 and will feature speakers from disciplines as far-ranging as politics and biomedicine, according to Director of Programming Ann Phelps.

“In America and across the globe, we are facing a crisis of leadership,” reads a blurb about the conference on the Program’s website. “Trust in institutions and the professionals who lead them is at a near-historic low, and in the aftermath of COVID-19, the importance of effective leadership has only become more apparent.”

The keynote address by Powell and Albright will serve as a preview of the Wake Forest Face-to-Face program’s event also featuring, which was rescheduled for the Fall of 2021 due to COVID-19.

“We really have the Face-to-Face program to thank for [being able to have Albright and Powell speak at the conference],” Phelps said. “With COVID-19 throwing a wrench into everything, a lot of programs that existed on campus sort of separate from each other have found meaningful ways to partner with each other. We thought it would be a great opportunity since it requires very little of big-name speakers to jump on their computers at home.”

Phelps hopes the talk will inspire students to seek solutions across the aisle.

“[Albright and Powell] were leaders coming from very different ideological positions at a polarized time,” Phelps said. “That said, I think that right now we are living through unprecedented polarization, and these are two people that can speak thoughtfully, brilliantly and kindly together about the world that we live in. I think that’s something that we really need right now.”

“In a moment when people who come from different ideological standpoints are having a really hard time talking and listening to one another,” Phelps continued, “our hope is that these two people can not only tell us how to do that, but show us how to do that.”

Attendees will be able to ask questions through the Zoom chat function after the talk, according to Phelps.

The conference will also feature involvement from Oxford University’s leadership program, and there will be a discussion of “Just Mercy” between Oxford and Wake Forest students.

“We’re only four hours apart [from Oxford],” Phelps said, “so we don’t need to travel across the ocean to have the same kind of meeting.”

Freshman Annie Phan, who plans to attend the conference, is looking forward to learning from the two diplomats.

“To get where they are now, Powell and Albright had to climb mountains. Others had only needed to breathe to get to the exact same place, all while staying true to their character,” Phan said. “As a woman and a minority, I want to take any guidance I can from two people who have broke ground and redefines what it means to be resilient and have strong principles in the face of adversity.”

Freshman John Bilos, who will also attend the conference, is looking forward to hearing from the diplomats.

“The incredible speakers and panel members will give Wake Forest students and people joining all around the world the opportunity to learn how character is both important and specific to certain professors,” Bilos said.

This is not the first time a Wake Forest leadership conference has been headlined by big names. A conference put on by the Program in February 2019 featured “Hamilton” star Renee Elise-Goldberry.