Demon Deacons lose in first round

Despite keeping it close early, Natasha Mack proved to be too much for Wake Forest to handle 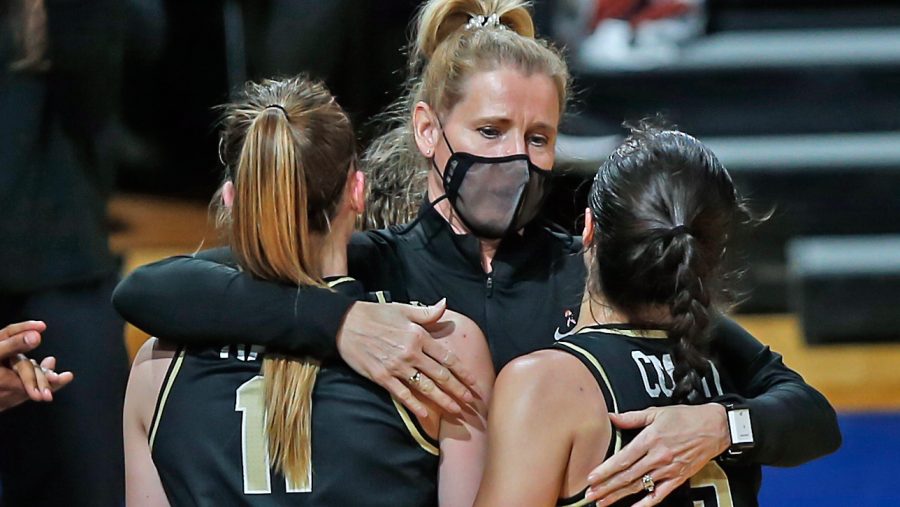 Head Coach Jen Hoover embracing seniors Ivana Raca and Gina Conti as they leave the court for what could be the last time.

In their first NCAA Tournament appearance since 1988, Wake Forest failed to move past the first round, falling to Oklahoma State on March 21, 84-61. For the entirety of the game, Wake Forest could not nullify the threat of Oklahoma’s Natasha Mack. Mack, a senior forward, dropped 27 points on the Demon Deacons and nabbed 15 rebounds. After the game, Head Coach Jen Hoover spoke highly of the OSU senior.

“She was as advertised. She [influenced] the game in so many ways,” Hoover said. “At times we did a really good job on her. At other times … she got what she wanted.”

Despite Hoover’s concern that Wake Forest would start the game slow due to nerves, the Demon Deacons came out firing on all cylinders. Early on, it became clear that the Mack-Morra battle in the post would become the focal point of the game. Morra scored the first six points for Wake Forest, and Mack scored the first four for Oklahoma State. Morra would go on to score a team-high 18 points for the Demon Deacons.

With the score tied at eight, Wake Forest finally broke a run of back-and-forth scoring, opening a short 4-0 run with scores by senior Ivana Raca and freshman Jewel Spear. The Cowgirls responded with an offensive rebound and putback from Mack, who was responsible for eight of the team’s first 10 points. Following a one for two trip at the foul line for Morra, Lexy Keys knocked down the first three-pointer of the game for Oklahoma State to tie the game at 13. To end the quarter, the teams traded baskets, finishing tied at 15.

Following the break, the Wake Forest defense adjusted in an attempt to neutralize Mack in the post. On the first Oklahoma State possession, two Demon Deacons collapsed on the forward, leaving freshman guard Neferatali Notoa wide open for three. After a steal on defense, Oklahoma State guard Micah Dennis hit a spinner for two.

While the nerves did not show in the first quarter for Wake Forest, they became evident during the second. Following another fruitless possession for the Demon Deacons, Notoa laid in an easy layup extending the lead to seven for the Cowgirls. Mack scored next for Oklahoma State, completing a 9-0 run in the first three minutes of the quarter. The streak finally came to a halt off of a three-pointer from Spear, but the momentum was still squarely with the Cowgirls. Following the Spear triple, Oklahoma State began another run.

After the Cowgirls scored four more consecutive points, Hoover finally called a timeout. Out of the timeout, guard Ja’mee Asberry hit a three-pointer, capping a 16-2 run to begin the quarter for the Cowgirls. The run proved to be costly for Wake Forest, and they never fully recovered.

“That run deflated us, but we were able to turn around and get right back,” Hoover said in the postgame press conference. “I’ll give credit to [our team] because I don’t think anybody ever quit. You don’t ever count the Deacons out.”

With the Cowgirls leading by 14, Wake Forest appeared to have some fight left in them, scoring five straight points off of a Morra two and a three-pointer from senior Gina Conti. But, as was the case for much of the game, Mack kept Oklahoma State in the driver’s seat. Much to the chagrin of Hoover, Mack was sent to the line for an and-one opportunity after a foul in the post. After the conversion from the line, Mack blocked a Wake Forest shot and took the ball all the way to the basket herself for another score. From there, the Demon Deacons looked to respond, scoring four straight points from Conti and sophomore Alexandria Scruggs. To end the half, Asberry knocked in a three-pointer that deflated Wake Forest’s efforts, making the halftime score 42-29. Much of the deficit could be attributed to Mack, who scored 15 points in the half and was the main reason why the Demon Deacons had been outrebounded by seven.

In the third period, the deficit was the same at the start for Wake Forest as it was at the finish. The period became a shooting gallery, with both teams hitting shots left and right. Neither team went on a run for the entire quarter, scoring in back-and-forth fashion for all 10 minutes. The highlight of the period came about halfway through, when the two teams combined for four straight three-pointers in the span of less than a minute.

In the fourth quarter, despite their best efforts, the wheels finally seemed to fall off the wagon for the Demon Deacons. After trading buckets at the start of the quarter, Oklahoma State rattled off seven straight points, widening their lead to 18 with five and a half minutes remaining in regulation. In an attempt to inspire one final stand, Hoover called a timeout.

At the end of the day, no matter how much effort the Deacons put into the game, the deficit was too large and Mack was too good. With 1:16 left in the game, Hoover gave her seniors, Raca and Conti, one final curtain call, bringing them off the court to a standing ovation. The three embraced in a hug, one that Hoover discussed in the postgame press conference with tears in her eyes.

“[The hug] meant an awful lot to us as a whole. As a coach, that’s the hardest thing to do, to say those goodbyes,” she said. “I honestly don’t want to think about [the seniors] leaving. I’ve got a daughter who’s probably crying in the stands because Gina was like a sister to her.”

After the game, Hoover was quick to recognize the successful season her team had, all during the era of COVID-19.

“[This season has] been unlike anything any of us have ever experienced. I couldn’t have been more proud [of the team] … and it doesn’t surprise me,” she said. “I’m just disappointed that I don’t get to do film with them tonight … practice tomorrow [or] be on the sideline coaching them on Tuesday. Moving on … I’m just not ready to think about [that].

Looking ahead for the Demon Deacons, the first order of business depends upon decisions to be made by seniors Gina Conti and Ivana Raca. With COVID-19 providing players with an extra year of eligibility, both could return to Wake Forest for another year. Raca is projected as a third-round pick in this year’s WNBA draft, should she declare. Conti could have pro basketball in her future as well.

“I’m still unsure whether I’m coming back or not,” Conti said after the game. “I’m going to take this time over the next few weeks to reflect and see what my future looks like.”

If both Raca and Conti were to leave, Wake Forest would be losing their two best players, and some of the best to ever don the black and gold. This season, the Demon Deacons averaged 66.4 points per game. On average, 30.5 of those points came from the two seniors. If Conti and Raca do call it a career, Wake Forest will return three starters in Jewel Spear, Christina Morra and Alexandria Scruggs. Expect Olivia Summiel to replace Raca at forward, while a battle would ensue for the open guard position. Kaia Harrison, Aniah Hoard and Elise Williams are all names to watch if Conti does not return.

According to Hoover, the expectations for next year are high.

“We expect to be back in the NCAA Tournament,” she said. “This is the new standard. Now every player that comes into this program is not going to have to just believe [they can make the tournament], they’re expected to accomplish it every year.”