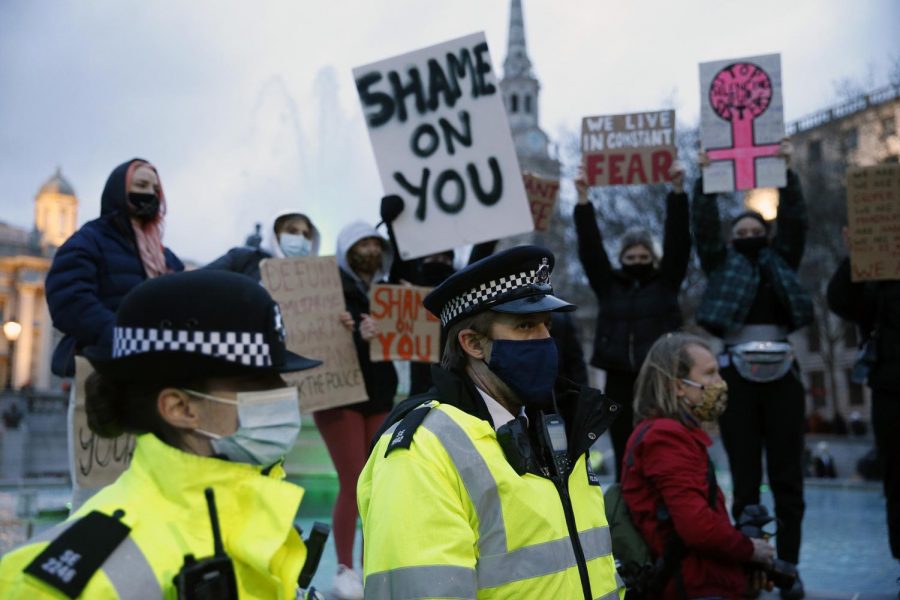 She did everything “right.” She did everything she was supposed to do. She was ‘covered up’ — dressed in clothing that covered her skin. She wore colors that stood out so that she could be spotted. She messaged her boyfriend with her whereabouts. But she still died.

If Sarah did everything right, why is she not here with us today? As women, we are taught to put trust and faith into those who have donned a uniform and the motto to “serve and protect.” But who exactly are the officers of the law protecting?

Who is to be culpable for the 97% of women that are sexually assaulted? As young girls, we are taught and raised to dress or act a certain way in order to negate the possibility of being a victim of sexual assault. Sarah Everard did everything right. Her story is one among millions that only cements the feelings of vulnerability and fear that women faced across our nation and all throughout history.

Every day, women are asked to make sacrifices for their own safety and wellbeing. If we fail to make these sacrifices and trade-offs, the blame is then placed onto our shoulders. The choice to take a better-lit route, wear a different article of clothing, or act a certain way ensures that women are held accountable for a man’s actions. Ostensibly, it is a woman’s responsibility to be the inferior and act accordingly in order to ensure her safety.

But when will the blame shift away from women and towards the genuine problem? A rapid and immediate change in our culture’s ideology is necessary to work toward a safer environment for everyone. The onus is currently placed firmly on women to do the “right” thing.

As a woman on a college campus, I fit into the statistic of the 18-24-year-old group that is three times more likely to be at risk of sexual assault while in college. I have become desensitized to this information and numb to the feeling that it gives me. Every other headline or story I read adds to this as I learn of survivors and victims of sexual assault, both on and off college campuses.

Society has reduced the identity of a woman to an object. We objectify both the way she dresses and her body, stripping away any sense of humanity that a woman holds. From a young age, women are viewed as objects and always considered in the ways they may affect men. So, no matter what we wear, any chance of showing skin turns us into an object and we are consequently treated as such. As a result, it is ingrained in our society to believe that it is a woman’s responsibility to make sure that she has made the necessary changes or fixes to prevent a man’s actions.

The reaction of the UK police force in response to the increased prevalence of sexual violence and attacks toward women was to implement a curfew and tell women to stay home. The actions of the police force are not to protect women. Instead, they restrict the rights of women based on the actions of men.

In American society, women are perceived as respectful and intelligent if they are covered up. Society only sees women as actual human beings if we are being restricted to appease a man’s desires. The sexualization of women seems to be our only defining feature — rendering it impossible for women to be thought of as anything else.

Sigmund Freund explains the sexualization of women best with his psychoanalytic theory known as the Madonna-Whore complex. The theory describes a dichotomy, stating that women are either pure and non-sexual or sexual and forthcoming. There is no in-between. In this world, men see the women that they date as sexual, but strive to marry a “pure” woman. This is an incredibly damaging view that makes women undesirable if they are sexual — or rather, makes it a sin to be “sexual.” Beyond the raw implications of the theory, it is a hard pill to swallow to acknowledge that the Madonna-Whore complex inhabits the minds of more men than we’d like to admit.

What is the next step? That’s a question that I ask myself every time I read a headline. How many more headlines will it take before people recognize the true problem? Even after following all of the proposed rules that society asks of women in order to remain “safe” and “in-line,” there are still millions of women who become just another number in a statistic. Instead of castigating men’s violence, why does society restricts women’s freedoms?